Burris' ego not limited to his tomb 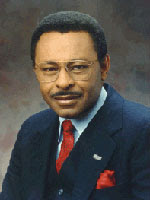 Sen. Roland Burris, D-Ill., in that he already has erected a tomb for himself and wife Burlean at Oak Woods Cemetery.

For those of us who pay attention to Chicago political people, we have long known of the tomb, which includes a sizable monument detailing all of Burris’ political achievements and “firsts” – and a bench so that people can sit in comfort while taking in the grandeur of all that was Roland Burris.

IF, SOME 10,000 years from now an archeologist stumbles across the site of what was once Chicago and finds Burris’ remains, it is going to be apparent that this was a person of some significance during his life.

Either that, or Roland believes his gravesite is going to be a tourist attraction for the Chicago of the future, just like Graceland is in Memphis.

I use the word “amusement” to describe my reaction to the shock outsiders feel because I have always known that Burris was a political person with an ego.

But anybody who thinks enough of himself to run for public office and think they have enough intelligence to make decisions on behalf of the people is going to be more ego-driven than most people. In short, Burris is far from the most ego-bloated political person in existence.

I DON’T EVEN think the tomb is the most outrageous example of Burris’ feelings toward his self-importance. I have always thought his children were a bigger example.

I still recall an early 1990s press conference held by then-Illinois Attorney General Roland Burris at the then-named State of Illinois Center. Burris was “talkin’ tough” about the credit-reporting agencies and how he thought their carelessness was causing people to suffer because of erroneous information driving down their credit reports.

Burris said he was determined to use his post to penalize the agencies for their mistakes.

And as an example of how bad the problem of erroneous information truly was, Burris let us see his own credit reports. They had taken hits because of instances where negative financial data belonging to his son and daughter managed to creep over onto his report.

OF COURSE, WHEN you name your son “Roland Jr.” and your daughter “Rolanda,” it might cause some credit-reporting agency bureaucrats to assume that a mistake was made in entering information into a computer, and that it all is one person.

Now I don’t mean to mock Roland Jr. or Rolanda. I’m sure both of them have received enough grief during their lifetimes, and I don’t want to pile up on it.

But it takes the ultimate in ego to think all of your children need to be named after you. At least in the case of boxer George Foreman and his five sons named George, we can think that perhaps he suffered a harsh blow to the head that caused him to have a lapse in judgment.

But when you consider that, then how can such a gaudy tomb be considered absurd. The only think that surprises me is that Burris did not have a larger structure erected – one that would make it possible for people to be charged admission so they could say they were in the presence of Roland’s earthly remains.

BESIDES THE TOMB is about as elaborate as the mausoleum in which Harold Washington’s remains are kept. That tomb informs anyone in its presence that the man inside was a former Chicago mayor, member of Congress AND state legislator – in case anyone didn’t know.

I’m sure Roland (the banker who became the first African-American elected to an Illinois state constitutional post – comptroller, then attorney general) thinks he’s just as worthy of public remembrance as Harold.

The ironic thing is that not even Burris’ choice of names for his children is unheard of in Chicago political circles.

TAKE THE LATE Cecil Partee, who was the first African-American to serve as Illinois Senate president, then became Chicago city treasurer and retired from politics after a stint as Cook County state’s attorney. He and wife Paris never had sons. Their daughters got the names “Cecile” and “Paris.”

Does this mean the Partee and Burris kids can commiserate? Or is it no different than George H. Ryan, Jr.? Or any of the Adlai Stevensons who followed the one-time Illinois governor-turned-presidential candidate and U.S. ambassador to the United Nations?

And for those people who think all of this makes Burris an absurd figure, I can’t help but wonder what they’d think if they knew about Burris’ “theme” music (unofficial, of course).

It was the theme from the old television show “Rawhide” (for a younger generation, it’s the song that the Blues Brothers band played at the bar that had “both types” of music, “country and western”), with the opening line “Rollin’, rollin’, rollin’,” changed to “Roland, Roland, Roland.” I remember a judicial group once endorsing Burris for attorney general by having press conference where a group of judges sang the song.

BURRIS LOVED IT so much that he encouraged its use, even after his political career was reduced from being a government official to being a token candidate for Chicago mayor and Illinois governor.

But in all honesty, that gaudy gimmick was what initially popped into my mind when I first learned Tuesday that Rod Blagojevich was likely to pick Burris for a U.S. Senate seat.

Only an egomaniac comes to think of an old TV jingle as his “theme music.” That sense of self-importance is also the answer to the question, “Why would Burris accept an appointment from Blagojevich?” that is being asked by many people.

Considering that Burris has been out of office for 14 years, has run several unsuccessful campaigns but still has space atop the list of achievements on his tomb, he wants a topping line. A couple of years in the Senate would give him that.

EDITOR’S NOTES: The tombs of Roland Burris (http://flickr.com/photos/southbound_07/2750018934/) and Harold Washington (http://cuip.uchicago.edu/schools/nkocs/AAH/haroldwashington.html) both adorn the same cemetery on Chicago’s South Side.

This is one of the most respectful pieces written recently about Burris’ tomb (http://blogs.usatoday.com/ondeadline/2008/12/rip-burriss-tom.html). Other websites have been more sarcastic.
Posted by Gregory Tejeda at 12:01 AM

You should check out what this blogger thinks of the mausoleum with probably better pictures.

There are more and more people that are in the need of Buy Viagra, many for serious and real erectile dysfunctions, others just for the placer of using Viagra, Generic Viagra. Now with the internet almost in every home it is more easy to get Viagra Online or Cheap Viagra or if you want you can purchase Viagra Online Without Prescription or Viagra Without Prescription, you just have to take the easiest way to obtain the product.