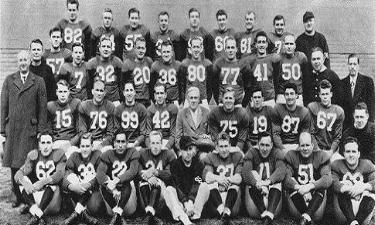 I’m not operating under any delusion that anyone affiliated with the Arizona Cardinals these days cares one bit about Chicago, or the fact that their team is owned by a Chicago-area family or was once the pride of the South Side.

But I must admit that the geeky historian in me with a particular interest in all things Chicago has enjoyed the portion of pre-Super Bowl hype that reminded us the last time the Cardinals made it to a National Football League championship game, they were our city’s team.

IT MAKES ME wonder what this city would be like in these early years of the 21st Century if the Cardinals had never chosen to leave the city. Mayor Richard M. Daley has said publicly he thinks Chicago could still support two professional football teams (even though no one else seems to agree).

What if the whole South Side vs. those losers up North wasn’t just a baseball thing?

Back in the days when Chicago had two NFL franchises, it truly was a way of life in this city, even though the Cardinals didn’t do much to bring trophies or other glory to the South Side.

The Cardinals were never much of a football franchise on the field. Their only undisputed championship came in 1947. Those people in Pottsville, Penn., still dispute whose team won the league title in 1925, and the NFL a few years ago decided not to get involved in straightening out a decades-old mess.

IN FACT, ONE of the bigger names to ever play for the Cardinals was Pat Summerall, who is remembered by generations of sports fans more as a broadcaster than for anything he did on the now asphalt-covered turf of what was once Comiskey Park.

The current dynamic of Chicago sports is one where the baseball season manages to split our citizenry into two factions (some of whom act as though they need to be medicated), only to be reunited come autumn when we all root for/get stupid over the Chicago Bears.

I guess that makes the Bears the equivalent of the city’s sports medication.

But think of how tense things would get in Chicago if we did not have the Bears to dissipate the tension.

WHAT IF THE same Sox vs. Cubs mentality carried over into the autumn whenever the “Monsters of the Midway” took on the “Big Red,” particularly if it had nearly 90 years worth of NFL history to back it up? (On a side note, what does it say that the Bears took their "Monsters" nickname and the Cardinals took their original colors from the University of Chicago -- which no longer plays big-time football?)

Just think of how crazed Chicago would be if the 9-7 regular season record Cardinals were Super Bowl-bound, while the equally 9-7 Bears couldn’t even qualify for the playoffs?

Now I know the reality of the situation is that the Bears were more solid financially than the Cardinals, particularly back in the 1950s. George Halas used that financial advantage to squeeze the Cardinals until they felt the need to leave the city, thereby giving him the then-second-largest city to his team.

But Joe Ziemba, in his history of the team entitled, “When Football Was Football,” speculated that the NFL’s efforts beginning in the mid-1960s to create parity among the league’s teams could have enabled both teams to survive – had the Cardinals managed to hold out a few more seasons in Chicago.

IT DIDN’T HAPPEN. As we know, the Cardinals left the Second City after 1959 – losing their last six games of that season. Various members of the Bidwell family have spent the past couple of weeks saying that Chicago could not have backed two football teams – no matter what would have happened in the future.

So perhaps this is all worthless speculation. But it creates a treat for us Chicagoans to remember another championship team from our city – one whose achievement can easily get lost in the shuffle of the team to St. Louis before it finally found a glorious stadium in Glendale, Ariz. – the Phoenix suburb that in a couple of weeks will be taken over by the White Sox for spring training.

Of course, many of us contemporary Chicagoans seem to have little clue. How else to explain the fact that President Barack Obama – who likes to think of himself as a hard-core South Sider – is rooting for Pittsburgh to win later today.

But it allows an older generation to reminisce about those games they saw. On that note, I’m going to end this commentary with an e-mail message I received recently from the son of Cardinals’ receiver Billy Dewell. He reminisces better than I can.

I saw your article on th 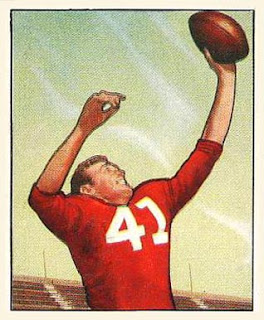 e Cards and had to write. In the team picture, the man wearing number 41 is the team captain and All-Pro receiver, Billly Dewell, who is also my dad. He passed away nine years ago on Jan 19th, but he did have a chance to attend the Chicago Cardinals Reunion in 1997 and had an absolute blast getting together with his old buddies. All of my brothers and one of my sisters attended the reunion and the atmosphere was amazing.

Throughout my life, my four brothers and two sisters heard countless stories of the games, train trips, pre season camp and the fellowship between the players, owners, and especially the fans. Dad said the players were totally dedicated to doing their best for the fans from the south side and took great pride representing that part of the city.

Many of the stories were humorous and it seemed like the players were not only very talented athletes, but were all really great guys. Most of them were family men, many who had served during (World War II) and returned to play ball.

We often asked dad to write a book about his years with the Cards but he never got around to it. But someone else did.

Joe Ziemba, a Chicago writer and the son of a former Cardinal player heard the same stories and wrote “When Football Was Football.” It is a fantastic book that not only tells the complete story of the Cardinals, but really follows every step of the entire history of the game of football from its inception up to 1997.

Mr. Ziemba sums up 100 years of professional football with a copyrighted poem my father wrote just for the reunion, and then read to the team at their final dinner when they were presented with championship rings by the Bidwell family. Fifty Years after the game. In the old days no one got rings. You just got to say you were the CHAMPS.

I was born in a hospital in Evergreen Park, so I can call the South Side of Chicago my home.

I know dad loved the Cardinals, and he and the team played their hearts out for the fans who came out in all kinds of weather to cheer them on. If you Google “Billy Dewell,” you will find lots of info about his career in Chicago and at SMU where he was an All Conference Athlete in Football Baseball and Basketball.

True Cardinal Fans just love the team wherever they are. We have been waiting a long time for this, so let's enjoy the ride.

EDITOR’S NOTES: The Cardinals still have (http://blogs.southtownstar.com/whitesox/2009/01/lets-cheer-the-chicago-cardina.html) a few fans (http://www.chicagotribune.com/sports/chi-27-hey-missyjan27,0,663455.column) in Chicago.

In another 20 seasons, the Greater Phoenix Area will be able to claim the Cardinals for a longer time period (http://www.suntimes.com/sports/football/bears/1396037,CST-SPT-chicard25.article) than they existed in Chicago.

I am interested in finding a nice picture of Herbert Blumer, Chicago Cardinal 1925-1932. Especially a good image from the 1925 team. Any help will be most appreciated.
Bikephreak@hotmail.com