The political career of Patrick Quinn is one of the most unusual in Illinois.

We’re talking about an official whose most significant achievement in Illinois history took place nearly three decades ago, and whose very presence as a government official since then has been as an irritant to the political establishment.

AT ONE POINT in the mid-to-late 1990s, his career appeared to be over, so much so that the Reform Party allies who thought Texas billionaire H. Ross Perot would be a significant boost to this country were courting Quinn for their ranks because no one else appeared to want him.

While some people say that Quinn the lieutenant governor is a muted version of his old bombastic self who was willing to say or do anything for “the cause,” the fact is that he is not Gov. Rod Blagojevich’s toady. By Quinn’s admission, the governor hasn’t spoken to him in a year-and-a-half (which I take as a sign of Blagojevich’s insularity, rather than as anything negative about Quinn).

But now, Quinn is on the verge of becoming the governor of Illinois – the so-called savior who will purify Illinois politics that some people want to believe was tainted by Blagojevich (but which really has been a cesspool for so long that it could be argued that the system tainted Milorod). 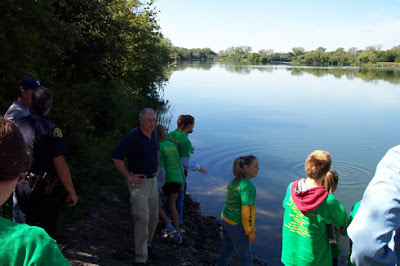 Pat Quinn will soon have more significant duties than helping to clean the Illinois River of pollutants. Photograph provided by State of Illinois.

It is possible that when you read this, Quinn will either be preparing himself to take the oath of office in a few hours – or may actually have to wait one more day. By week's end, Quinn likely will be the 41st chief executive of the State of Illinois.

QUINN MAY FINALLY achieve something that tops what always appeared to be the most significant achievement of his career – the early 1980s effort that restructured the General Assembly and the way that Illinois voters picked their state legislators.

To government geeks whose passion is the Illinois Statehouse Scene, it is the “cutback amendment.” Whether you say it with a tone of respect or a sneer says more about the way you perceive government than it does anything about Quinn.

Under the cutback amendment, the Illinois House of Representatives was slashed from 177 to 118 members. The entire General Assembly went from 236 individuals to 177.

Quinn was the leader of the activist movement that forced the restructuring onto the ballot so that voters could say that fewer legislators was better. That was the argument Quinn made – there just wasn’t a need for so many Illinois House members.

WHILE MANY PEOPLE talk about wanting to undertake actions that would reduce the size of government (such as cutting the number of aldermen in the City Council from 50 to something like 20 or 30) or the size of government entities (such as breaking the northwestern suburban counties into their own separate county), few people have the initiative and stubborn streak in them to get those causes turned into reality.

Now I have heard the arguments from the people who hate “cutback.” It eliminated the concept of minority party representatives, such as Republican legislators from Chicago or Democrats/independents from central Illinois.

I’d argue that those minority legislators were only getting elected because the old system propped them up – not because the local residents actually wanted them. I have always seen “cutback” as a more honest effort for electing legislators.

For that, we should thank Quinn.

HIS CAREER MANAGED to get a boost when he got elected state treasurer for Illinois government, where he served from 1991-95 and reinforced his reputation as a political gadfly/pain in the tushy by being the guy who would constantly criticize his government colleagues (Democrat or Republican).

It was also in that era that he perfected the technique of the Sunday press conference, figuring that reporter types on that day would be desperate for any activity that could pass for “news.” Quinn gained the reputation of a political egomaniac.

The end result is that few Democrats were saddened when his career in public service appeared to end in that GOP onslaught of the 1994 elections that saw Republicans take over everything in state government.

WHILE THERE WAS evidence that some funky vote counting acts may have occurred, Quinn’s low-budget campaign (Who wants to give money to a political pest who won’t show his gratitude in the future?) meant he didn’t have the money to pay legal fees to challenge the results.

His critics denounced him then as a “sore loser,” but I have to wonder who’s laughing now? Quinn is on the verge of becoming governor of Illinois, while who really remembers that Kearns ever ran for a statewide office? For that matter, who outside of Kane County (far western Chicago suburbs) remembers Mary Lou Kearns?

It was in that era that Quinn kept quiet for a few years, focusing his attention on his law practice (he is a specialist in the area of tax law) because he had two sons who were approaching college age. Somebody had to pay those tuition bills.

When Reform Party types tried to talk him into their ranks in the late 1990s, Quinn wouldn’t come out and say “no” to the followers of Ross Perot, but said back then, “I’m a Democrat at heart.”

BUT QUINN’S “COMEBACK” in the 2002 elections was made possible largely because Republicans by then had sunk from their highs of 1995-96 of dominating Illinois government to their current status of being irrelevant to the day-to-day operations of the Statehouse Scene.

And as for Democrats, the attention was on getting the top of the ticket post of governor. Lieutenant governor is considered so irrelevant to the daily operations of the state that some people think the post ought to be abolished.

So Quinn was able to get back on the government payroll. The old days of Sunday press conferences were toned down. In recent years, Quinn’s “crusade” (since Blagojevich does not appear to have given him any significant duties to fulfill) is showing up at the funerals of Illinois soldiers killed in Iraq or Afghanistan, as a gesture that Illinois government cares about the losses suffered by local families.

That takes us to today, when The Mighty Quinn is on the verge of being governor for at least two years.

IT WILL BE interesting if he can gain any advantage from incumbency, because already there are the younger generation of Illinois political people lining up for a chance to run for governor come the 2010 elections.

Some of them already have campaign funds in the millions of dollars (compared to Quinn, who had less than $90,000 on hand as of Dec. 31, according to the Illinois State Board of Elections).

He’s not going to have an easy time of staying in office, particularly since many Democrats are inclined to think that only a younger candidate can truly escape the taint of Rod Blagojevich – particularly if the soon-to-be-former governor’s trial in U.S. District Court winds up taking place some time around the November 2010 general election (which is a very real possibility, considering how long it can take for a case to come to trial).

But being the first Illinois lieutenant governor to rise to the top post since Sam Shapiro replaced Otto Kerner in 1968 will give Quinn a chance to finally do something that tops the “cutback amendment” in his legacy.

HE’S GOING TO be the governor who gets stuck trying to pull Illinois government out of its economic troubles, which were aggravated by the blatant political partisanship between Blagojevich and the General Assembly, particularly that of Illinois House Speaker Michael Madigan, D-Chicago.

I’m going to use this commentary to wish Pat Quinn “good luck.” All of us, regardless of whether Democrat, Republican or the wishy-washy type who calls himself “independent,” ought to hope Quinn doesn’t muck things up this year and next.

Because there’s a very good chance that a few months from now, his aggravation level caused by the state’s severe financial problems will rise to the point where he’ll wish he was the guy who only had to go to military funerals to pay the state’s respects.

EDITOR’S NOTES: No matter what Rod Blagojevich says, it won’t be much longer before Pat Quinn (http://www.chicagobusiness.com/cgi-bin/news.pl?id=32791) becomes Illinois governor.

Quinn will become governor almost instantaneously once the Illinois Senate rams (http://www.pantagraph.com/articles/2009/01/27/news/doc497f9d1f67add163073601.txt) through its vote to remove Blagojevich from office. One of his first “acts” will be having Milorod’s name removed (http://www.chicagotribune.com/news/local/chi-quinn-sidebar28jan28,0,2666469.story) from all the signs that welcome people to Illinois.
Posted by Gregory Tejeda at 12:01 AM

It's good that Blagojevich has been finally removed. We hope that the successor will do a better jobs.. Based on his background and what people say about him, I think he will be a leader.. Hope that he will not be tempted to abuse his power just like Blagojevich did..

"My daddy got a letter once
That praised him to the skies,"
Thus did the governor announce
To compensate for lies.

Usurping governor Pat Quinn,
"I loved my dear old Dad,
And if I praise my next-of-kin
Then how can I be bad?"

So all that crowd of fifty-nine
Self-patters on the back--
Contortionists without a spine--
Its glibness seemed to smack.

So Pat may be a chipper chirper,
A cheerful cheeky chunk,
But also Pat is a usurper,
Auctoritas for bunk.