It is amazing to me to see the sheer number of Illinois political people who are piling on the list of people who don’t want George Bush to do a thing that could be perceived as sympathy for former Gov. George Ryan.

Much has been made of the fact that Sen. Richard Durbin, D-Ill., sent a letter to the outgoing president asking that he consider a commutation of Ryan’s prison sentence from 6 ½ years to the just over one year that he has already served. Gov. Rod Blagojevich has also said he would not be offended if Ryan were to be set free.

YET THOSE TWO are about the only public officials who are willing to consider the concept that Ryan may have suffered enough for his offense – which amounted to trying to ignore the fact that his staffers in the motor vehicles department were shaking down truck drivers for bribes.

For all the people who want to keep screaming “Willis family” and “dead kids,” we have to accept the reality that the truck driver who got his commercial driver’s license by paying a bribe acted at a level that was so far removed from Ryan. People who want to imply that George Ryan personally killed those kids (a line of rhetoric I have often heard from Ryan critics) need to consider how ridiculous they sound.

Yet the vehemence of those Ryan critics is making many people afraid to get on board a Ryan bandwagon. 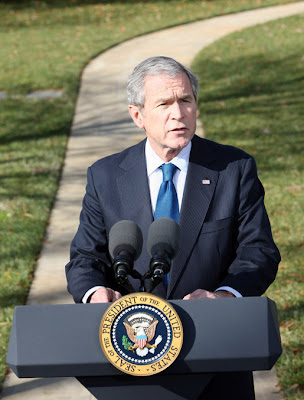 Who seriously believes George W. Bush, whose record shows him to be stingy when it comes to granting clemency, will consider early release for George Ryan. Photograph provided by the White House.

In recent days, we’ve heard from the Illinois attorney general, and just about every member of Congress (including the newly elected Rep. Debbie Halvorson, D-Ill., who is the representative whose district includes Ryan’s hometown of Kankakee).

WE’VE EVEN HEARD from the chairman of the Illinois Republican Party, urging that Ryan not get any sympathy. Rep. Mark Kirk, R-Ill., has also been a particularly outspoken GOP critic of commutation for Ryan, as has DuPage County State’s Attorney Joe Birkett – who is likely to be at the top of the GOP ticket in the 2010 elections.

In fact, I can’t help but wonder what it says that the only officials willing to back Ryan are Democrats, while Ryan’s so-called political allies in the Republican Party have all turned against him.

It is the reason I will always be convinced that the reason many people are really ticked off about Ryan is because of his activities as governor related to the death penalty, which were done because the General Assembly back then tried to ignore the issue – even though it was clear that the system in Illinois was a mess.

Many of his critics really wish they could have him in prison for “freeing criminals” (which is how they perceive his commutations of death row inmate sentences, even though most of them remain in prison to this day). They are willing to play politics with labels such as “Willis family” if it means he can be punished.

IT’S PROBABLY CLEAR that I think (as I have written previously) it would not be an abomination if Ryan were to be released from prison in the near future. I honestly believe he has been broken as low as one can go.

For those people who need Ryan to suffer a death in prison to feel a sense of justice, that kind of thought just strikes me as being ghoulish and a twisted notion of what constitutes justice.

Yet the outspoken nature of Ryan’s critics has many political people scared to the point where they seem to be racing each other to see who can make the first, and most fiery, condemnation of Illinois’ one-time governor.

Ultimately, the reason all of this strikes me as overkill is that I am convinced George W. Bush will NEVER seriously consider granting commutation (although I have noticed that many people who oppose positive activity for Ryan insist on calling it a pardon).

IN FACT, BUSH’S spokeswoman earlier this week (who once was a reporter intern at the Statehouse in Springfield, Ill., with the CBS affiliate in Champaign) confirmed that Durbin’s letter to the president had been received, and that he would consider activity on pardons before leaving office next month – even though Durbin never asked for a pardon (which clears a record, commutation merely releases him from prison) for Ryan.

That actually has been seen as legitimate cause to overturn a death sentence on appeal. I can’t help but think the fact that some people are trying to scare Bush by implying a pardon is being sought ought to be taken into account in Ryan’s favor.

But like I wrote before, I don’t think Bush will grant a pardon, commutation or anything else. I think he will leave the governor who tried to make an issue out of the death penalty (a measure used to massive overkill while Bush was a Texas governor) in prison.

KEEP IN MIND that Ryan’s activities caused national embarrassment for his GOP colleagues (as did his visits to Cuba to meet with Fidel Castro to talk about trade). Why else would only a few Democrats be willing to show sympathy for Ryan?

George W. Bush will have his own controversy with regard to pardons and clemency when he tries to use his final days in office to show compassion to political allies. I don’t think he’s going to be willing to take on criticism by dealing with Ryan, when he’s going to get his share of abuse for showing sympathy to people like Michael Milken and the people who might someday face criminal charges for their military activity (including torture) at Abu Ghraib.

Insofar as the concept that the next president might look more favorably upon Ryan, I don’t think that would happen.

Not only has President-elect Barack Obama refused to say anything about this issue (which is correct, since clemency is a personal issue and Bush should be allowed to set his own terms for granting it), but by the time a President Obama would be in a position to consider clemency for Ryan, the former governor would have virtually finished completion of his prison term.

EDITOR’S NOTES: I don’t know if I agree with this columnist, who seems to believe (http://www.stltoday.com/stltoday/news/columnists.nsf/patgauen/story/E8015292AD2182538625751500107E21?OpenDocument) that George Ryan could be released from prison just before Inauguration Day.

Dick Durbin seems to be about the only member of Illinois’ delegation on Capitol Hill who has a nice word (http://www.southtownstar.com/news/1315434,120508ryan.article) about the former governor.

People trying seriously to figure out to whom George W. Bush might show a last-minute (http://www.bloomberg.com/apps/news?pid=20601039&refer=columnist_woolner&sid=a5d6rDFL9ILk) dose of clemency aren’t wasting much time thinking about Ryan.

Without a jolt of presidential clemency, Ryan is looking to be released from prison on (http://tinyurl.com/5olmfw) on Independence Day, 2013.
Posted by Gregory Tejeda at 12:01 AM

The reason Republicans are being so hard on Ryan is NOT so much because of his stand on the death penalty, as it is the fact that they blame him for destroying any chance any GOP member has of being elected to statewide office for the foreseeable future.

Republicans are bending over backwards to distance themselves from Ryan because he's the #1 reason Blago -- arguably just as bad if not worse than Ryan in the corruption department -- has been elected governor twice. Remember all those TV ads painting Judy Baar Topinka as a Ryan stooge?