MADIGAN vs. BLAGOJEVICH: Which politico will take down the other first? 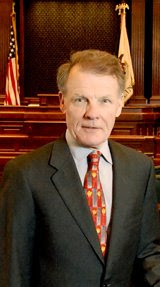 earance of remaining in office, his critics responded with a hard, crushing blow.

Illinois House Speaker Michael Madigan, D-Chicago, is having the state House of Representatives begin the process of impeachment.

SO THIS IS going to turn into a race – literally. Will the Legislature be able to put together articles of impeachment before Blagojevich takes some action out of spite that would make impeachment a moot point?

For those people who think that a Blagojevich resignation or recusal from office would be a good thing that would spare Illinoisans much hassle, think again. The people who run our state’s Legislature are making it clear they’re more interested in taking Blagojevich down.

The Illinois House now has a bipartisan committee that is studying Blagojevich’s conduct to determine exactly what it is they are impeaching him for, and they say something could be ready for consideration by early 2009. Keep in mind that all those things the U.S. attorney’s office claims the governor did are for so-called violations of federal law.

w by legislators when they want to have it fresh and powerful when/if Blagojevich goes on trial – likely in a couple of years.

SO THE ILLINOIS General Assembly is going to have to come up with its own evidence that Blagojevich has done something worthy of impeachment by the Illinois House, and a trial by the state Senate that could remove him from office – if a majority of senators were to vote to convict.

That is the credibility problem the Legislature has now. Lawmakers are more than willing to put up large-enough majorities to remove him from office, even though they really don’t know why they’d be doing so.

And if legislators are not careful, they are going to create an impression of being little more than a political lynch mob – out to get Blagojevich for anything.

That is going to be the angle Blagojevich will play up as he appears determined to leave the Illinois gubernatorial post only if he is given something to compensate him for the political damage that has occurred to his career in public service.

IT HELPS HIS case that he has hired a Chicago attorney with a record of being willing to take on high-profile clients with negative public images. Blagojevich now has an attorney who’s not going to be intimidated by Madigan’s legislative power. He’ll fight, and perhaps he’ll win. Don’t forget that in the case of rapper R. Kelly, Ed Genson actually got his client a conviction – even though many people remain convinced Kelly’s kinky behavior on those videotapes ought to be illegal.

So now, the news coverage of the Blagojevich saga is literally going to become a “horserace story.” The derogatory term for campaign coverage that focuses on the superficial will literally be applicable because it will now focus on whether the Legislature in Springfield, Ill., can get articles of impeachment prepared quickly enough.

In theory, they’re also considering measures that would merely take away the Illinois governor’s authority to fill an Illinois vacancy in the U.S. Senate, without directly challenging Blagojevich’s legal authority to remain governor.

But that measure seems to be on hold. Legislators seem to have decided that “impeachment” is the way they want to go – probably because the word has an ominous sound to it that will make it appear as though Blagojevich is being punished now for his actions as governor (rather than waiting for the federal courts to work their way through the process and go to trial – don’t forget that the R. Kelly case in Cook County Court took nearly five years before a trial took place).

NOW THAT THE Legislature is taking a hard line, it won’t surprise me to see Blagojevich give up on any consideration of resigning without a deal in place to give him something, anything, to assuage his ego.

One other point about Monday’s activity caught my attention.

Madigan at one point tried to give the impression that nothing about Blagojevich’s alleged conduct surprised him, telling reporter-types, “I’ve had a chance to get to know Mr. Blagojevich over six years, so I was not surprised.

“In light of what we’ve all seen, … how can anyone be surprised?” Madigan said.

IT FITS IN with many past statements by Madigan that Blagojevich’s actions as governor are irrational. Yet the two men have known each other much longer than six years.

After all, Blagojevich was once one of the rank-and-file legislators who answered to Madigan from 1993-96, when Rod represented the Ravenswood and Lincoln Square neighborhoods in the Illinois House, before moving up to representing Chicago’s Northwest Side for six years in Congress.

Back in those days in Springfield, there was the impression that Blagojevich was singled out by Madigan for hazing and abuse because of his family ties – his father-in-law, then and now, is Alderman Dick Mell. It was often perceived that the Madigan abuse of Blagojevich was meant to be a message to Mell that he had better not think he had any special influence in legislative issues, just because he got his son-in-law elected to an Illinois House seat.

Even though Blagojevich and Mell have since had a falling out of their own, we need to remember that Madigan and Blagojevich have had their differences for decades. None of this nasty rhetoric ought to be considered new, and I can’t help but think that Madigan and his allies are enjoying the governor’s predicament just a bit too much.

Criminals like Blagojevich have to be made an example out of.