Forget the conservatives who say they accept Obama better than liberals took to George W. Bush back in the year 2000

For the past two years, conservative opponents of Barack Obama have tried to create the perception that he’s not a “real American,” engag

ing in a goofy conspiracy theory that says his birth certificate was tampered with so as to cover up the fact that he’s an African (and not the type with an "-American" after it).

When they try to argue facts, they seem to come up with different theories. One says that he was really born in Kenya to Barack Sr. and mother Ann Dunham, who was a U.S. citizen, which would make him primarily a Kenyan citizen by birth.

ANOTHER SAYS THAT because his father was a Kenyan citizen (in Hawaii to attend a public university on scholarship, where he met the U.S.-born woman who became one of his wives) that overcomes any claim that Obama Jr. would have to being able to say he is a natural-born citizen – even though he was born in Hawaii.

The We The People Foundation has pushed these theories, in the forms of two full-page advertisements that were taken out in the Chicago Tribune. The ads take on the form of letters sent to Obama, telling him to confess that he’s not truly a natural-born citizen; which would make him ineligible to serve as a U.S. president.

Many people have filed lawsuits in various legal jurisdictions making similar claims, and the Supreme Court of the United States on Friday will be asked to consider whether there is even the remotest hint of legitimacy to this theory in determining whether to reject outright an appeal of a lawsuit filed against the New Jersey secretary of state’s office. 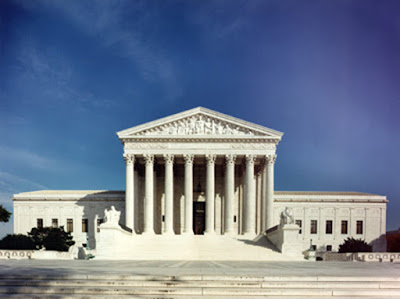 Activists who want to believe Barack Obama is a "foreigner" likely will convene here on Friday. Photograph from the Supreme Court Collection.

The high court could decide to let the appeals on these lawsuits proceed in the nation’s high court, although they are expected to reject the measure – which would eliminate the lawsuits altogether.

BUT THESE LAWSUITS are not so much about actually getting a court to rule in their favor, as they are about keeping alive the trash talk that Obama is some sort of foreigner who’s trying to overtake the United States of America.

I’d argue that the protest to be held outside the Supreme Court building on Friday while the high court considers the lawsuit’s legitimacy is more important to these activists than anything that happens inside the high court’s building.

That, combined with the press conference the foundation is scheduled to have on Monday at the National Press Club in Washington, is about putting their argument through to the general public.

They are counting on being able to stir up the resentment of the roughly 46 percent of the electorate that voted for John McCain, and still has hang-ups about Obama actually being allowed to take office next month. One of the lawsuits was filed by Alan Keyes, who apparently is still bitter that his whacked-out view of the world was rejected by Illinois voters – who preferred Obama for the U.S. Senate by a 70 percent to 27 percent vote.

NONE OF THIS rhetoric surprises me.

I remember two years ago (when Obama was still an unknown outside of Illinois) when I heard the loudmouthed pundit, Ann Coulter, on television finish up a diatribe with a wisecrack that she could never support Obama for president because, “I want my president to be an American.”

All throughout the campaign season, we had to listen to attacks (ultimately unsuccessful) about how different Obama was from the social conservative view of what a “real American” is.

With some people trying to portray the significance of Obama’s electoral victory in last month’s presidential elections as evidence that these conservative views are out of the mainstream of U.S. thought, I fully expect the Obama critics to go out of their way to continue the concept that Obama is a “foreigner.”

WHAT GETS TO me is that some people don’t seem to have much of a clue as to what constitutes citizenship. And the thought of dual citizenship is something that is truly lost upon them.

Part of the problem is that the nations of the world do not agree on what constitutes citizenship of their respective countries.

In totalitarian places such as Cuba, citizenship is not something that can ever be changed – or renounced. Some countries, anxious to claim as many people as possible, encourage the idea of dual citizenship throughout one’s lifetime.

How else does someone like Chicago White Sox manager Ozzie Guillen say seriously that he is still a Venezuelan citizen, even though when he took his naturalization oath, he specifically renounced any citizenship claim or loyalty to another government.

MY POINT IS that I have no doubt that Kenya, which was once a British colony, would have been more than willing to extend citizenship to the son of one of its citizens, even if he was actually born in another country – as is the case with Honolulu-born Obama.

They have a twisted (usually Anglo) view of what this country ought to be about, instead of accepting the 21st Century reality that the United States is a mixture of the best of many countries throughout the world. The victory of Obama is merely evidence that a majority of the population is accepting reality.

THE PEOPLE WHO are pursuing lawsuits such as the one that the Supreme Court will have to consider on Friday are the ones living in a past that was nowhere nearly as pristine as they would like to believe, which is why we have advanced to the point we are at now.

I have no doubt that many of the people who want to believe these conspiracy theories about Obama’s birth are the same ones who were pleased when the Supreme Court in 2000 refused to consider overturning the actions of Florida secretary of state officials – which gave an Electoral College victory to Bush.

Will they be outraged when the high court treats their latest actions with equal disregard? And is this line of argument merely the first step in what is going to be four (if not eight) years worth of sniping against Obama by political conservatives?

Conservative activists are more interested in using the Supreme Court to advance debate (http://www.chicagotribune.com/news/politics/obama/chi-obama-birth-certificatedec04,0,664988.story) on their Obama opposition, rather than to give them a favorable legal ruling.

How long lasting is the legacy of a president’s appointments to the Supreme Court? George Bush the elder gave us Clarence Thomas, who is the justice who encouraged the high court (http://www.afro.com/tabid/456/itemid/2273/Thomas-breaks-custom-forces-court-to-look-at-Obam.aspx) to give these lawsuits a perfunctory look on Friday – rather than reject them outright.
Posted by Gregory Tejeda at 12:01 AM

ugh, I'm so sick of hearing about this. In a time of crisis, our only hope is competent leadership, something Bush has failed miserably to give America. Our only hope now it would seem, is Obama, and what do some conservatives want to do? Destroy that potential, the potential to save their own country.
This is pathetic and truly on its own level of sadness, I can only pity these individuals and their attempt at hurting this country further more than it already is.