A DAY IN THE LIFE (as seen from Chicago): To the Right, Oh Be Quiet! 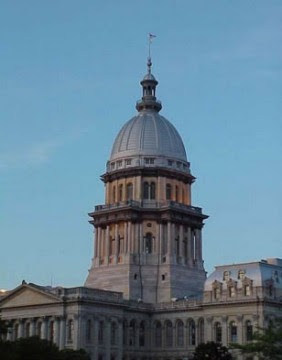 A part of me would like to think that the “Festivus Pole” erected at the Statehouse in Springpatch is just a stupid idea concocted by someone who watches too much television.

After all, the whole gag of the “Seinfeld” episode in which Frank Costanza tells us of his Festivus holiday was that it reinforced the notion that he was a blowhard who got worked up over stupid things. The idea that anybody took seriously such a parody of a holiday is a sad sign.

BUT I CAN’T just dismiss this stunt because of the way in which at least one conservative activist is taking it so seriously, while also reinforcing the concept that what some religious types are really interested in is not promoting their own beliefs for public debate, but ramming them down the throats of everybody else.

For those of you who are wondering what I’m talking about, it is the “Festivus Pole” erected at the Statehouse, at the request of a Springfield teenager who thought it ridiculous that a nativity scene, a giant menorah and a display promoting atheism all were set up inside the rotunda of the state capitol for this holiday season.

So he went ahead and got a pole, then got permission from the Illinois Secretary of State’s office (which manages the capitol grounds) to erect it.

His stunt got national attention when it became known that the group of religious activists who fought for permission to set up their nativity scene were offended, saying it was disrespectful to their own project, and also promoted a holiday that “is nothing.”

THOSE WERE THE words as reported by the Chicago Tribune and St. Louis Post-Dispatch newspapers of Daniel Zanoza, an activist who used to live in the Chicago area, but has since moved to rural Illinois because he feels his conservative beliefs on many social issues fit in more comfortably there.

He’s probably right, and it wouldn’t shock me to learn many of the locals like the idea of a nativity scene erected in the capitol. But I still have a problem with many of these public displays of religious beliefs, just because I think many of them are tacky looking and wind up being disrespectful to the religious beliefs that are supposed to be acknowledged.

I’m not just talking about the Statehouse. Who really thinks the giant menorah outside of Daley Center serves a purpose, other than to provide the impression of religious “balance’ to the Christmas tree, while really doing nothing more than cluttering the Daley Plaza grounds?

What other news nuggets are worthy of public attention on this Day After Christmas/sixth night of Hanukkah/first Day of Kwanzaa?

GEORGE RYAN IS TOO HOT FOR GEORGE BUSH TO HANDLE: Anybody who thinks I’m exaggerating the unlikelihood that President George W. Bush will do nothing to help former Gov. George Ryan ought to look at the way the outgoing president handled the case of Isaac Toussie.

He was a real estate developer prosecuted by “the feds” for a real estate scam. Bush granted him a pardon on Tuesday, then rescinded it on Wednesday. Officially, presidential aides claim Bush was not given a proper understanding of what it was Toussie had done, thereby making any form of presidential forgiveness inappropriate.

Political cynics would say it is Bush trying to eliminate the taint his legacy would suffer by giving a pardon to a man whose father donated just over $28,000 to the Republican National Committee, thereby creating the perception that Toussie’s pardon was purchased.

If Bush wouldn’t take some political heat in this case, why should anyone think he would be willing to do much of anything to help Ryan get out of serving five more years at the federal facility in Terre Haute, Ind.? Ryan will likely have to wait until Independence Day 2013 before he can get out of prison.

GETTING AWAY FROM THE WEATHER: Many people are getting all worked up these days over the photographs emanating from Honolulu – the ones that show President-elect Barack Obama to be in good physical shape for a man two decades younger than himself, let alone his real age (48).

But what intrigues me is the idea that this country now has a president who can legitimately vacation in Hawaii. If any past chief executive had tried to do so, it would have been used as evidence of a trivial mentality.

But the Honolulu-born Obama can claim he’s merely visiting his sister, although being able to stake a claim to a portion of the beachfront as his own (and have the Secret Service enforce that claim) shows that this is no mere Hawaii vacation.

If anything, this trip shows that Obama has a certain amount of sense. I’d be more concerned if he had insisted on spending his Christmas holidays at the “homestead” in Hyde Park. As much as I enjoy the area in and around Chicago, I wish I could be some other place right now – somewhere where the temperatures aren’t being driven below 0 degrees by wind chill and where ice on the roads doesn’t cause my car to go slip, slidin’ away (with apologies to Paul Simon the singer) off the road and into a bank of snow.

But now, it’s going to take on a sad tone. For Eartha Kitt, the singer whose version of the song will always be THE version, died on Christmas Day. She was 81, and had been treated for colon cancer.

In fact, in my mind, the coincidence of her death date will cause the song to erase what many people want to believe was Kitt’s greatest entertainment accomplishment – being one of several women to play “the Catwoman” opposite Adam West in the 1960s campy (but still classic)version of “Batman.”

But what the woman named for a prime cotton harvest in the year of her berth (the Earth was fertile that year, her parents thought) really ought to be remembered for was rising from what could have been a life working the fields or in factories to instead being an actress in several films who could be in a position to upset then-first lady Lady Bird Johnson by saying the youth of America had a legitimate gripe in opposing U.S. military involvement in Vietnam.