Loss of Tribune would be a news loss 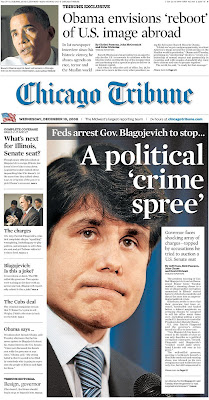 hroughout the years, mainly because I think it ought to be one of the elite publications of the world – but isn’t.

Yet in the past couple of days, the Tribune has given us some examples of the kind of journalism that the Internet has shown itself incapable of doing as of yet. Considering that Tribune Co. is now in Bankruptcy Court trying to restructure its debt so it can remain alive, we ought to take a serious look at what will be lost if the day comes that newspapers wither away.

THINK ABOUT IT. It was just on Monday that attorneys for Tribune Co. filed their request in U.S. Bankruptcy Court. For the rest of that afternoon, all we heard was big play for stories touting the idea that the end of newspapers has FINALLY arrived – the Tribune is dead (even if it really isn’t).

And I could already envision the drooling that was taking place at the Chicago Sun-Times, which planned to give big play in their Tuesday morning editions to the fact that their competition declared bankruptcy – even though it has always been the Sun-Times that was the “financially struggling” newspaper.

Yet when Tuesday came and those Sun-Times editions hit the newsstands with all those pages of stories and columns about the Tribune ownership’s financial problems, they seemed ridiculously obsolete.

Because the fact was that the news cycle had already advanced to Rod Blagojevich – who now is an internationally known corrupt politician.

EVERY SINGLE NATIONAL newscast was playing up the Blagojevich story (particularly the concept that he was trying to “sell” the U.S. Senate seat being abandoned by Barack Obama), and every newspaper was trying to make itself seem timely by rushing a story about Blagojevich onto the website.

And every single one of those sites, along with every broadcast, was forced to attribute the Chicago Tribune, which had the basics of the story nailed down in those same Tuesday editions. They started off the day one up on everybody else, and advanced the story even further.

Reading the Tribune on Wednesday gave a thorough understanding of the issue, as they were able to use their resources (the paper with the “Midwest’s largest reporting team”) to advance the story from so many angles.

Too many news-gathering organizations (and many broadcasters who pretend they cover news) wound up doing little more than regurgitating the press conferences held by U.S. Attorney Patrick (“Lincoln would roll over in his grave”) Fitzgerald and others, including Lt. Gov. Patrick (“Rod should step aside, not resign”) Quinn.

YET THIS WASN’T even the only “exclusive” story given to us by the Tribune. Their reporters usually based in Washington managed to get a one-on-one interview with President-elect Barack Obama, and the newspaper billed it as Obama’s first interview with a U.S.-based newspaper since last month’s elections.

I’m sure the Sun-Times – whose Washington correspondent, Lynn Sweet, has developed a reputation in the past two years for being THE Obama expert – would loved to have had that interview.

It was the Tribune that let us know that Obama considers it a priority to improve the standing of the United States (and the western world in general) in the Middle East, and plans to take the oath of office under his full name – Barack Hussein Obama – even though it will give the nativists yet more things to rant and rage about with regards to the 44th president.

It was even that same Tribune interview that showed Obama trying to dodge answering questions about barricades along the U.S./Mexico border, which will tick off the Latino activists.

IN SHORT, IT was a newspaper that is generating the news, by having its reporter-types work to root out stories – instead of offering up commentary and analysis (even high-quality commentary such as is what is found at the Chicago Argus and its sister weblog, The South Chicagoan) as is what is found on most websites and weblogs that are not affiliated with a newspaper.

It was just the other day that an MSNBC news anchor (it might have been Norah O’Donnell – there’s a degree to which all TV people look alike to me) made the comment that newspapers ought to be able to make big money off the Internet, considering that small operations like PerezHilton.com manage to generate income.

Yet the difference is that those are small operations with a limited scope and with minimal staff. They aren’t trying to engage in the same scale of newsgathering that the major metropolitan newspapers are tackling every day. So they don’t need the kind of income a newspaper does.

What constitutes a profit for a website is mere crumbs for a newspaper.

I’M ALSO SURE that if “the Tribune” were broken up into hundreds of weblogs, it could easily generate many sites with the kind of hits and credibility that many of the sites most vehemently outspoken against the so-called Mainstream Media would like to think they have.

I recently read a weblog whose writer/publisher was on a rant saying that newspapers were too likely to blame their financial problems on economic troubles confronting everybody – rather than their own editorial ineptitude.

Yet it is their editorial content that people do not properly appreciate, and likely will not appreciate until some cities are left without any kind of newspaper and the editorial quality of the remaining newsgathering organizations declines to the point of triviality.

Just think of how much less we would truly know about Blagojevich’s situation if all we had to go by was the Fitzgerald press conference? The Tribune managed to "shift" the focus of the story from their bankruptcy to the news they gather to the point where I must confess – I’m curious to see how many days the Tribune can keep its streak going of “breaking the news.”

EDITOR’S NOTES: The Chicago Tribune has covered the Blagojevich “bust” from (http://www.chicagotribune.com/news/chi-blago-arrest-gallery,0,7219468.storygallery) many different angles. Who else but a D.C.-based pundit would compare Tribune boss Sam Zell (http://www.washingtonpost.com/wp-dyn/content/article/2008/12/09/AR2008120902782.html?hpid=opinionsbox1) to Gov. Milorod?

How many people truly appreciate how much less information will be publicly available if the (http://www.businessweek.com/magazine/content/08_51/b4113000569807.htm) newspapers that report it wither away?

What does “Barack Hussein Obama” mean (http://notabene.typepad.com/canossa/2008/02/juan-cole-on-th.html)?
Posted by Gregory Tejeda at 12:01 AM