Elgin publishing schedule could become the norm for Chicago newspapers

I’m not a regular reader of the Courier News newspaper of Elgin. But I will b 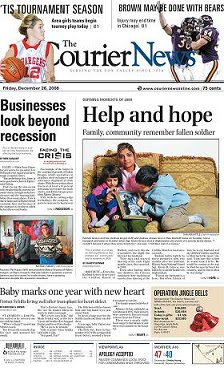 e paying attention to the publication in the Kane County suburbs of Chicago because it is planning on a couple of changes that I have long thought were inevitable for newspapers.

The newspaper is giving up on the idea of publishing a distinct edition for Saturday. Some of the features that now appear in the Saturday paper will turn up a day earlier on Friday, while more attention will be put into making the Sunday paper (the one that pretends to be fat and substantial in content) more worthwhile.

THE NEWSPAPER’S PUBLISHERS also plan to turn their broadsheet format newspaper into a tabloid (think of Tribune-sized pages being converted into Sun-Times size).

Neither of these changes bothers me. In fact, I can’t help but think that the newspaper industry has been moving in this direction for quite awhile. So making these changes is just a matter of accepting modern reality.

The simple fact is that most Saturday newspapers are pointless. Many papers publish scrawny editions on that day whose sole purpose is to create the illusion that the publication comes out every single day.

But the fact is that readership of Saturday editions of newspapers has always been significantly lower than any other day, particularly compared to the Friday and Sunday editions that precede and follow it.

THE FACT IS that while I personally wait until Sunday before reading a Sunday newspaper, I am aware of the fact that many people prefer to buy those “early edition” copies that hit the newsstands by Saturday afternoon (I once bought a “Sunday” paper in downtown Chicago at 7 a.m. Saturday), then spend the whole weekend going through all those feature-y sections.

If one can accept the idea that the hard news in the front pages and in the sports section is NOT going to be the hot-breaking news from Saturday, but is instead some space-filling features that can be removed and replaced with real news for the Sunday “late final edition,” then this concept makes sense.

I could learn to accept this goal, if eliminating a Saturday paper meant more emphasis and more interesting publications on Friday and Sunday.

Besides, the part of me that is a political reporter knows one other reality – many government officials make a point of releasing statements on potentially negative (from their perspective) news late Friday afternoon.

THEY VIEW SUCH activity as a way of claiming they have nothing to hide, while also ensuring that the resulting stories will turn up in the sparsely read Saturday editions of newspapers.

Then, there’s the other change – the one that’s most likely to cause outrage among long-standing readers of the Courier News. Tabloid is not just a trashy type of reporting, it’s really a printed page format.

It is the one that the Sun-Times has used for more than six decades (the old Chicago Sun, and later, the Sun & Times, were broadsheets), and can allow for pages that give greater emphasis to the stories placed on them – because the pages are smaller and there are fewer elements per page.

A QUALITY TABLOID newspaper can almost be like a daily news magazine, and can be designed in ways that make for more interesting reading.

Now for those people who are about to argue with me that newspapers are meant to be broadsheet, with those big bulky pages that fold in half, I’d argue that the changes of recent years have already undercut the broadsheet format.

With the way that newspaper pages have become more and more narrow, the typical broadsheet newspaper is barely wider than a tabloid page. It’s not like the old days when tabloid pages were 15 or so inches wide – a page width that even the Wall Street Journal has abandoned.

Seriously, I took my ruler to the Friday editions of the Tribune and Sun-Times, and found that the latter paper’s pages of 11 ½ inches wide were close to the Tribune, at 12 inches.

AND WHEN ONE looks at the graphic elements that the Tribune is trying to do with its latest re-design, they usually consist of large pictures and bold type whose potential visual strength is lost by having to fill a full broadsheet page of 22 inches high (compared to 12 ½ inches for the Sun-Times).

In fact, what hurt the Tribune’s front page presentation from Nov. 5 (Barack Obama’s Election Day victory) was that most of the large photograph and all of the headline type turned up in the bottom half of the front page. Which means all those news boxes had papers with the bulk of the goods out of view of the potential buyer.

My honest attitude toward the Tribune’s attempt at a new format is that they’re trying to do tabloid style graphics (which can be attractive if done stylishly and with a touch of class) on pages far too large.

In fact, there are times if I wonder if the Tribune’s future is to become a collection of loosely affiliated themed publications along the lines of “RedEye” or “Hoy” – both of which are tabloid in format and in spirit.

SO I VIEW the Courier News management (which ultimately is the Sun-Times company management) as having a grasp on reality in accepting that the tabloid format makes sense. 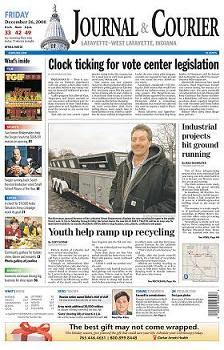 It would be better than what I once saw during a trip to Indianapolis. On the way back home, we stopped for gasoline and something to eat in West Lafayette, Ind. Out of habit, I stopped at a local news box and picked up the local newspaper – the Journal & Courier – to go along with the Indianapolis Star I picked up earlier.

That newspaper was presented as a broadsheet with a fold in the middle. But its pages were the same width as the Chicago Sun-Times, and its page height was only about three inches more than the Sun-Times, or about seven inches less than a Tribune.

The Indiana paper was a tabloid pretending to be a broadsheet, which made the whole presentation (in my mind) look convoluted.

CONSIDERING THAT THE Courier News is a part of the whole Sun-Times News Group (which includes daily papers in outer cities such as Joliet, Waukegan, Tinley Park and Merrillville, Ind., to name a few), I would not be surprised if all that company’s newspapers wound up taking on such format changes. Elgin could very well become the laboratory for what Chicago-area newspapers will look like in coming years.

When one takes into account the fact that newspapers in other cities are talking about dropping daily publication on weekdays (telling their readers that those will be the days they will have to use the newspaper’s website if they want updated information), I view the whole Elgin experiment as far less radical than some people might try to portray it as.

EDITOR’S NOTES: The end of January will be the beginning of a new format for one (http://www.businesswire.com/portal/site/google/?ndmViewId=news_view&newsId=20081226005015&newsLang=en) of the daily newspapers that publishes on the fringe of the Chicago area.

The Courier News of Elgin is far from the only “daily” newspaper to decide “daily” isn’t (http://www.editorandpublisher.com/eandp/news/article_display.jsp?vnu_content_id=1003924707) worth the extra effort come the publisher's Pay Day.
Posted by Gregory Tejeda at 12:01 AM