That was Gov. Rod Blagojevich’s initial response Tuesday to learning that federal agents had a warrant for his arrest on various charges claiming the contributions his staff was soliciting were really bribes.

ADMITTEDLY, THE RESPONSE wasn’t completely out of line, because the FBI showed up at Blagojevich’s Ravenswood neighborhood home at about 6 a.m., and one agent made a telephone call asking the governor to come outside and surrender himself – without stirring up the neighbors or his two daughters.

If I got a phone call waking me up and telling me I was under arrest, my first response might be to think that some crackpot got my telephone number and was trying to have some twisted fun at my expense.

But I’m sure it also plays into the way Blagojevich has viewed the past three years, with federal agents poking into his administration’s activities for things he probably does not think are illegal. 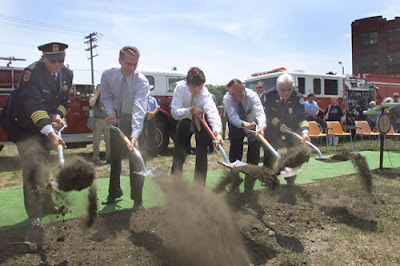 Be honest; how many of you look at Rod Blagojevich at the groundbreaking for a fire station in Streator and envision him doing similar labor at a minimum-security prison camp? Photograph provided by State of Illinois.

The governor likely views all the federal activity that was put on display Tuesday by U.S. Attorney Patrick Fitzgerald and other federal agents as some sort of joke. Considering that the initial calls for Blagojevich to resign came from powerless Republicans who have been making similar pleas for years now, it adds to the “hilarity” of the situation.

YET THERE’S REALLY nothing funny about this situation. Except, quite possibly, the notion that Blagojevich tried to extort the Chicago Tribune newspaper – an allegation made by Fitzgerald.

As a one-time full-time reporter-type, I know it is common for people to call up the paper and start screaming that they want somebody fired. The idea that Blagojevich was offended by some of the Tribune’s editorials and wanted certain editorial writers fired isn’t shocking at all.

Whether the fact that Blagojevich reminded Tribune officials that their previous desires to sell Wrigley Field to the state could be impacted by continued negative editorials constitutes criminal behavior is something for a jury to decide in the future.

But the key moment was the claim that Blagojevich was demanding personal considerations from anyone who he would name to replace Barack Obama in the U.S. Senate.

NOW BY FITZGERALD’S own admission, he has been investigating Blagojevich for nearly three years – yet none of the allegedly illegal activity took place until last month.

He admits that after hearing the wiretaps of the Blagojevich residence's home telephone line, he put pressure on his staff to come up quickly with a criminal complaint because he thinks many of the so-called schemes being worked by Blagojevich and chief of staff John Harris would have resulted in people losing their jobs or suffering in other ways come early 2009.

By that logic, he’s saving us from future problems. Of course, every law enforcement professional – particularly the kind who keep track of their “kills” (ie, convictions) – thinks they are saving us from our worst elements.

In my mind, I can already hear Blagojevich’s justification. He will claim he’s engaging in the hardball that is a realistic part of political activity, and that prosecutors are exaggerating the potential that he could have personally enriched himself.

THAT LITERALLY WAS the line of thought put forth by former Gov. George Ryan, who noted that he gained nothing financially and whose supporters note that his wife, Lura Lynn, is now struggling to support herself.

It even is similar to the line of defense put forth by former Chicago city Treasurer Miriam Santos, who claimed her own (wiretap-taped) conversations that vociferously demanded campaign contributions for her failed bid for Illinois attorney general was just rude behavior on her part – which led to her now infamous statement, “I’m … probably the first woman to go to jail for PMSing.”

To what will Gov. Milorod attribute his activity?

It may sound absurd to some, but that logic will gain support from some elements who fear that police and other law enforcement go too far, and have the potential to start penalizing people who don’t fit in with their own (often conservative) political thoughts.

ASIDE FROM FITZGERALD’S crack about Abraham Lincoln likely to be ashamed of Blagojevich’s acts, the line from his Dirksen Federal Building appearance that caught my attention was his claim that he specifically was NOT doing such a thing.

“We’re comfortable in saying that someone is scheming within the law … for personal enrichment,” Fitzgerald told reporter-types. “We’re not trying to criminalize people engaged in politics.” 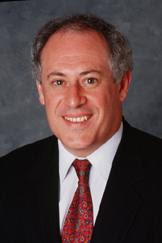 He’s not going to resign, and I’m not sure the Democrat-controlled General Assembly would want to give Republicans a “Christmas present” of sorts by putting him through impeachment, even though many Dems are loving it that Blagojevich is suffering these days. Patrick Quinn (right), who says he "prayed" for the people of Illinois upon learning about Blagojevich, will have to wait a bit longer to become governor.

HE WILL BE like many other Chicago politicos who got indicted and kept their seat until the day they were sentenced to prison (possibly up to 20 years in Blagojevich’s case, if a judge were inclined to give him the maximum).

If anything, the person who will suffer from this will be whoever winds up getting Blagojevich’s appointment to serve in the Senate, although some Legislature members are looking into ways to take that authority away from him.

Whether it’s Emil Jones or Tammy Duckworth or Jesse Jackson Jr. or Jan Schakowsky (who on Tuesday told MSNBC Blagojevich didn’t ask her for anything improper), that person is going to be the butt of jokes in the District of Columbia. (“How much did you pay?”)

It also makes it likely that no one on Capitol Hill will take that legislator seriously. We might have to wind up with relying on Sen. Richard Durbin, D-Ill., and the favors of a “President Obama” if Chicago and Illinois are to get anything in the next few years.

IF ANYTHING, IT makes whoever challenges the incumbent Democrat (both in the 2010 primary and general elections) the favorite for electoral victory.

Of course, that presumes the Republican Party in this state isn’t so weak that it could take advantage of the situation. Think I’m kidding? Blagojevich was just as unpopular among the Illinois electorate now as he was in 2006, yet he still won handily even though the GOP had a legitimate candidate in Judy Baar Topinka.

EDITOR’S NOTES: Read the criminal complaint against Rod Blagojevich for yourself (http://www.thesmokinggun.com/archive/years/2008/1209081rod1.html).

Blagojevich is now an international political figure, quite possibly in places where the locals (http://news.bbc.co.uk/2/hi/americas/7773717.stm) won’t have problems figuring out how to pronounce his name (blah-GO-yah-vitch).

Jesse White for U.S. Senate? The Washington Post seems to think he’s the only person (http://voices.washingtonpost.com/thefix/2008/12/blagojevich_arrested_a_fundame.html) who could now be perceived as an independent voice for two years.
Posted by Gregory Tejeda at 12:01 AM