Picking a United States senator from the trash bin of political retirees might not seem like an aggressive act. 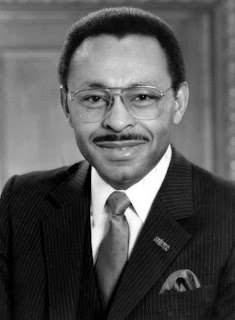 Yet for Gov. Rod Blagojevich, his selection Tuesday of Roland Burris as Illinois’ junior member of the U.S. Senate was a statement directed at the Illinois General Assembly, the U.S. Attorney’s office in Chicago, and any other smart aleck who has devoted his time in recent weeks to taking potshots at Milorod and his wife.

BLAGOJEVICH HAS “TALKED tough” about standing up for a political and legal fight and continuing to try to do “the people’s business.” Proceeding with selecting a replacement for Barack Obama as though the past month has not happened is about nothing more than telling people to shove off.

It’s about responding to the General Assembly, where Illinois House members are preparing the political grounds upon which Blagojevich would be removed from office prior to the scheduled end of his term in January 2011.

And it’s about telling U.S. Attorney Patrick Fitzgerald (who in federal documents is usually referred to merely as “the USA”) that his attempt to circumvent Blagojevich’s authority to pick a replacement senator was a lame gesture.

On the one hand, it would appear that Blagojevich has a touch of Texian in him.

THE TEXIANS WERE the original white settlers in the 1830s to what was then the Mexican state of Texas – of which about 200 or so got bottled up in a one-time Catholic mission in what is now San Antonio (remember the Alamo?).

Those men wound up getting slaughtered by the Mexican army, which had them vastly outnumbered and was prepared to show them no quarter.

Just like how the General Assembly these days is hellbent on saying that it impeached Blagojevich and booted him from office – even though the real evidence of criminal activity on the governor’s part will not be made available to them, so they’re proceeding with charges based on things such as Blagojevich’s lame (and failed) attempt to purchase influenza vaccinations from foreign sources to make up for the fact that the usual sources for such vaccinations were not able to provide anything for Illinois.

Blagojevich’s attorney, Ed Gensen of Chicago, is repeatedly saying that the charges being considered against the governor for impeachment are not really criminal, and that the Legislature is showing signs of not respecting the due process rights that would be afforded Blagojevich in a legitimate criminal hearing.

THOSE ARE MERE token defenses on Gensen’s part, and I’m sure even he realizes that impeachment is a political maneuver. The Legislature can remove the governor from office for whatever grounds it deems worthy, and only has to provide enough due process so as to eliminate the perception that what is taking place is legitimate removal – and NOT a coup d’etat.

Meanwhile, Fitzgerald was clear enough when his office announced the criminal complaint against the governor – they wanted to stop him from being able to make a replacement pick for the U.S. Senate. Their concerns about the way in which Blagojevich allegedly was handling the situation is what provoked the Democratic leadership of the U.S. Senate to ask the governor not to try to do anything with regards to replacing Obama.

So in the midst of this bombardment on Blagojevich by the Legislature and the USA, the governor responded by giving us a new U.S. senator, and just in time for the new senator to take office along with all the other Senate newcomers when the newly-elected legislative body begins its work in Washington on Tuesday.

It’s a “Drop dead!” to the Legislature for playing such hardball with impeachment rhetoric. Another “Drop dead!” to USA Fitzgerald for thinking he could intervene with a governor’s legitimate authority to fill political vacancies. A “Drop dead!” to Senate Majority Leader Harry Reid, D-Nev., for not showing support for a fellow Democratic Party official.

AND A FINAL “Drop dead!” is directed to every single political observer whose political partisanship has caused him (or her) to spend the past six years taking pot shots at Blagojevich, and now may have them drooling with glee at the thought of being able to attach the “I” word to the Blagojevich legacy.

This clearly was a political selection made from spite. I wouldn’t be surprised to learn that even Blagojevich himself realizes that his pick will never actually assume the ranks of the U.S. Senate.

But should it be the Washington bigwigs who prevent Roland Burris from ending his political career on Capitol Hill (instead if with a string of electoral failures) or should it be Illinois Legislature types who craft some sort of maneuver to prevent Burris from becoming a senator, then Blagojevich will claim it is those people (and NOT him) who are harming Illinois’ political interests.

It could also be a maneuver meant to place blame on others should the eventual U.S. senator from Illinois NOT be an African-American. Blagojevich will claim he tried to give the Senate a lone African-American member, and that it is all the political hacks who are intervening.

THIS MANEUVER MIGHT sound too cold and calculating to be realistic. But then again, it is just as callous an act as those being conducted by legislative types who are trying to organize the removal of a duly-elected official from public office.

The ironic part of all this is that Burris is far from the worst choice that could have been made for a U.S. senator from Illinois, particularly if Burris has enough sense to view himself as a caretaker of what is left of Obama’s Senate term and not start thinking of building a lengthy Washington legacy for himself.

At age 71 and with electoral defeats for Chicago mayor and Illinois governor behind him (it has been 14 years since Burris finished his string on state government service that included multiple terms as state comptroller and a term as state attorney general), I would hope Burris has common sense – despite the fact that his political past has shown an ability to let his ego run amok.

But we are talking the Centralia native turned Chicagoan who has shown an ability to reach out to all Illinoisans and who was the first black man to win a statewide political post. He even had his moment of Hollywood “glory” when he made a cameo appearance in the 1993 film “The Fugitive,” starring Harrison Ford.

SENDING A POLITICAL pro like Burris to Washington for two years while all the political partisans of both Democrat and Republican persuasion gear up for a nasty electoral fight in the 2010 elections would not be the worst fate that could befall Illinois.

In fact, it might be one bit of evidence that Blagojevich is capable of making a logical government decision – even if his motivation was not so much the “public good” as a desire to tell his enemies to “Drop dead!”