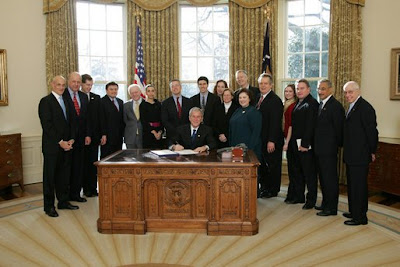 On the same day that President George W. Bush signed the Wilbur Wilberforce Trafficking Victims Protection Reauthorization Act with much ritual, he also granted clemency to 20 people in a very low-key manner. Photograph provided by the White House.

I could almost sense the glee that likely popped into the hearts and minds of a segment of the Illinois population when they learned that President George W. Bush granted clemency to 20 people – and former Gov. George Ryan wasn’t one of them.

None of the people to whom Bush showed sympathy on Tuesday were involved in anything resembling high-profile crimes. Many were for federal drug-related crimes for which the people in question had already served their prison terms.

THE ONLY CASE that comes close to being a Chicago incident is the pardon granted to James Won Hee Kang of South Barrington, who was sentenced in U.S. District Court in Chicago back in 1985 to one year of probation and a $5,000 fine on a conviction of trafficking in counterfeit goods.

The purpose of seeking clemency at this point is so that their criminal convictions will not forevermore haunt them in what remains of their lives. It is common for such clemency to be granted in cases where the felon has shown serious signs of remorse and rehabilitation.

In short, hardly anyone is getting out of a punishment by Bush’s actions. Only one of the cases involved a commutation of a prison sentence, and that particular inmate still has to serve an extensive period of supervised release outside of a federal correctional center.

But the thing to keep in mind is that this is the annual tradition of a Christmas “gift” of sorts to people who might be deserving of a bit of clemency. It is NOT the other presidential “tradition” of granting some form of clemency to people whose high-profile cases are so controversial that the very thought of sympathy will offend those parts of the public who secretly wish for life prison terms for everybody who disagrees with them.

THAT IS THE group in which Ryan’s case will come up, and it likely will be the final (or next to final) act of the Bush administration occurring in the morning hours of Jan. 20 – Barack Obama becomes president at noon of that date.

Now I have written it before, and I will repeat myself. I don’t believe Bush will be inclined to show Ryan any sympathy. Not a pardon (which would offer legal “forgiveness” for his conviction), nor a commutation of sentence (which would leave his conviction in place, but get him out of serving the remaining 5 years of his prison term).

Ryan’s biggest critics are those conservative Republicans of Illinois who think that the former governor’s conduct in office gave too much to Democrats and left them in their weakened state (if only they’d look at their own behavior and stubborn ideological beliefs, they’d see the real reason the Illinois GOP is struggling).

There is also the fact that Ryan’s desires to reform the death penalty in Illinois reflected poorly upon Bush, who when he was Texas governor presided over a process that used to see two or three executions per month, compared to about one or two per year in Illinois during the 1990s – before Ryan put in place the moratorium that brought executions here to a halt.

THOSE PEOPLE WHO are bothered by this are also the people who still think favorably of George W. Bush’s presidency, and that last-minute round of clemency will go to the people who need a legal break so as to uphold Bush’s legacy.

Part of Bush’s legacy is also going to be the fact that he has been stingier about granting clemency than other presidents. Thus far, he has only given 191 pardons and nine commutations of sentences – or about half the total of other recent two-term presidents such as Ronald Reagan or Bill Clinton.

This isn’t a man who is inclined to think it his place to go against a ruling by a jury and a sentence imposed by a judge. It would take exceptional instances to get him to do anything in a case.

That is why I think anyone connected with Abu Ghraib and the torture that took place there by U.S. military personnel will be the most likely to get a break from Bush, along with I. Lewis “Scooter” Libby – the former vice-presidential aide who previously got a commutation of sentence so he wouldn’t have to serve prison time, but still has a criminal conviction in place for his involvement in the covering up of who leaked the identity of CIA operative Valerie Plame.

BY BUSH’S WAY of thinking, why should he “waste” clemency on George Ryan when those others are more deserving on ideological grounds?

So when the Chicago Sun-Times (or to be more accurate, http://www.suntimes.com/) publishes the headline “Former Illinois Gov. George Ryan not on Bush pardon and commutation list,” those of you who are out for the former governor’s scalp should not start high-fiving each other and declaring “Victory!”

That moment will come when the rest of the country is caught up in the ceremonial pomp and circumstance of the Obama inauguration. You will be the ones getting all worked up at the thought of a 74-year-old man having to spend a few more years in a minimum-security work camp.

Because by the time that a President Obama would be in a position to consider clemency for Ryan, he will be close enough to having served his whole prison term (tentative release date, July 4, 2013) that it will be a moot point.

Bush granted a pardon to a deceased man whose “crime” was helping to provide arms (http://www.washingtonpost.com/wp-dyn/content/article/2008/12/23/AR2008122301601.html) to Jewish people just before the creation of a nation of Israel. Does this mean George Ryan has a chance at a pardon after he dies?

This is the Internet posting that likely got Ryan critics all worked up, at least until they realized (http://blogs.suntimes.com/sweet/2008/12/former_illinois_gov_george_rya.html) Bush still has just under a month to act on the Ryan family’s pleas for clemency.

Not everybody thinks a presidential pardon for Scooter Libby would be an injustice (http://www.usnews.com/blogs/barone/2008/12/23/george-bush-should-pardon-scooter-libby.html).
Posted by Gregory Tejeda at 12:01 AM