This verdict is weird

former Gov. Rod Blagojevich, who is only guilty of one of the 24 counts that were pending against him. I am more confused now than I was when the verdict was announced.

To my mindset, he got dinged on the least serious charge – one whose purpose for being added onto the list of 24 was to pile on the charges and increase the potential for prison time once a “guilty” verdict was reached against him.

IN SHORT, THE charge is evidence that federal prosecutors have something of a bully mentality to the way they approach their job. One might argue that the kind of people who get singled out by the federal government are the ones who have done some serious wrong and deserve to be pushed back a bit.

But a part of me seriously believes this particular charge all by itself makes no sense. It only makes sense in a context with guilty verdicts on other charges. Which, as we all know by now, didn’t happen with the case of Rod Blagojevich and his brother, Robert. Although I'm sure there's a law schooll graduate out there with too much free time on his hands who will be more than willing to e-mail me a convoluted explanation of how this can be justified.

One has to remember that the FBI had been watching Blagojevich for years before the incident that was supposedly his “crime of the century” – that of trying to “sell” an apppointment to the U.S. Senate to whomever would arrange for him to get the largest campaign contribution.

None of that behavior occurred until the days after Barack Obama got himself elected as president in November 2008.

THE COUNT FOR which he is now a guilty man who must check the “yes” box that asks “Have you ever been convicted of a felony?” is one that relates to a conversation the governor had with the FBI back in 2005. 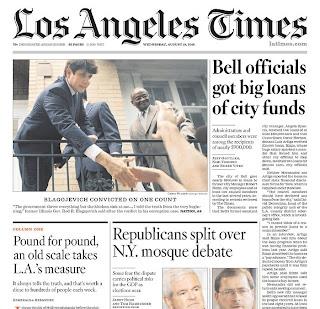 Blagojevich said he put strict “firewalls” between himself and his campaign contributors so as to prevent them from gaining any undue influence with him. Prosecutors say that was blatantly untrue, so they’re charging him with it.

Now I know there are stricter requirements in place by which people are supposed to be cooperative with law enforcement types, even though the Bill of Rights itself protects us from having to make statements that would incriminate ourselves.

But my point in bringing all this up is to say that it is not an illegal act for a politician to keep track of who is giving money to support his (or her) political campaigns. So his statement, strictly speaking, wasn’t covering up a specifically illegal act. 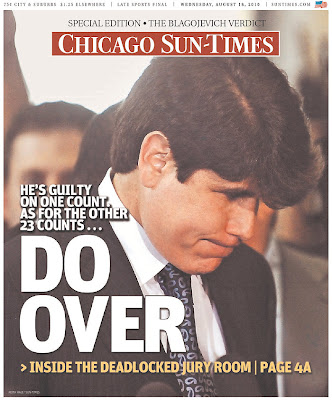 WHICH IS WHY I don’t get how a jury could seriously vote unanimously for “guilty” on this one count when they couldn’t reach unanimous agreement on anything else.

It almost strikes me as being some sort of mental compromise – find him guilty of the most petty charge so that the headlines will all say “Blagojevich Guilty!” (except for those few that preferred to say, “Blagojevich a Liar!”). It will appease those people who were determined to have Blagojevich serve a prison term, regardless of the facts behind his actual behavior.

But I still say it makes little to no sense.

He “lied” about something that, strictly speaking, wasn’t illegal. But none of the potentially criminal real activity could be decided upon. Perhaps because it really is unclear to what degree we ought to be criminalizing political behavior. 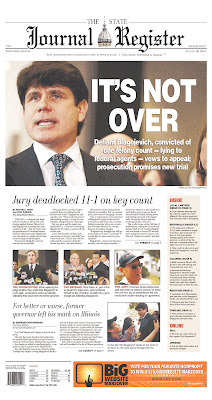 SO NOW WE have to sit back and wait for Aug. 26 to get an official sense of what federal prosecutors intend to do with the 23 charges that are still pending. The real shock would be if prosecutors decided to just accept the one-count conviction – which likely could get Blagojevich about one year of real time in a federal correctional center.

We will be getting a new trial, perhaps some time next year. Which means this issue will continue to hang over Illinois government operations. It also means Republican patisans can continue to rant and rage about the issue without giving off the appearance of bringing up ancient (by contemporary pop culture terms) history.

We get to relive this entire experience. Although I would expect a scaled-back version of the case, and perhaps one that won’t attract the nation

al hordes that this particular trial brought to Chicago. I do believe the “do over” trial will be strictly a local spectacle, because I can’t help but think that the nation has had its fill of Milorod Blagojevich.

I’ll also have to admit I didn’t think much early on of the decision by U.S. District Judge James Zagel to grant anonymity to the jurors in this particular case. Yet I’m sure the woman who allegedly was the 1 in the 11-1 votes to convict on a few counts is glad she gets to be anonymous.

AT LEAST UNTIL some conservative ideologue persists in publicly identifying her, and will also claim he is not responsible for any fate that befalls her as a result.

Because I suspect when that happens, she is going to become the potential mate for Steve Bartman – that Chicago Cubs fan whom some other fanatics irrationally blame for costing the Cubs a National League championship in 2003.

I’d like to think that the masses will behave rationally. Most people will. But all it will take is for one ding-dong to act up in a stupid manner for this to become a national incident.