No news ‘anchor’ won’t bother me

On the one hand, I once remember hearing about someone in management at a news organization complain that the

company would be so profitable on its current revenues, “if only we didn’t have to pay for reporters.”

On the other, I got a kick out of reading Variety, where television executive Lee Abrams saying, “we’re trying to get away from Barbie and Ken sitting behind a desk chit-chatting with each other with their nice teeth.”

ABRAMS IS THE senior vice president and chief innovations officer for Chicago-based Tribune Co., who is developing the idea known as “NewsFix” – which I would guess is meant to be the 21st Century take on a newcast format.

It is being mocked because Abrams’ format calls for no news anchor. There won’t be some perky blond paired up with a man (either an older white man to give a sense of experience, or a minority to provide a sense of ethnic balance) sitting behind a desk while giving us introductions to stories that were written by someone else.

We have had jokes that it will be an empty set. No people. Maybe even no reporters. The perfect cost-efficient newsroom run by nobody.

Actually, what it seems like is that the “anchor” will be reduced to just a voice, who will read transitions from story to story, which will largely consist of video clips. It seems like the idea of actual people putting together the news is what he wants to eliminate.

VARIETY (THE LONG-time newspaper of the entertainment industry) says Abrams in part is trying to create a newscast that replicates the experience one has when they log onto a computer and use the Internet to try to find out information about events taking place in the world today.

They skip about and go from story to story, often from site to site – incorporating various news organizations. The “anchor” that puts these stories into a coherent picture is the person’s own mind because they have a certain logic as to why they look for one story, then try to find something else they think is relevant, then perhaps stumble onto something unexpected while looking for yet a third news item.

It sounds like chaos, but I’m sure officials are figuring it will appeal to those people who want to think they’re not relying on anyone else’s news judgment but instead employing their own to make sense of the society around them.

If anything, it will take more news judgment on the part of television stations that use this new format to make the randomness of an Internet news search appear to be organized, rather than truly confusing to people.

IT JUST WON’T give people who work in television news broadcasting as much face time.

I’m sure that will be a blow to some professional broadcasters who went into television because their ego is assauged by the thought that everybody can see their face and that they have the potential to become mini-celebrities.

Yet I have to admit I don’t care.

The emphasis on the visual, no matter how trite, is why I never got into the idea of working in television news. There are times when I find the Barbie-like look of the female anchor that has become a part of every news equation these days to be a distraction from the content of the news copy she is reading.

WE DO RUN the risk of turning news shops into places where deep, booming baritone voices prevail, and those who can’t sound like the “voice of God” while reading the news will get weeded out of the news business – no matter how much they comprehend the copy that is before them.

There is one thing to keep in mind. Tribune Co. broadcasting may be Chicago-based, but we’re not going to see this on WGN-TV any time soon. Variety reported that the new format will be tried on the company’s station in Houston, and may be considered most likely for stations that are lingering at the bottom of the local ratings.

WGN has too much going for it these days to be tinkered with, whereas a “going nowhere” television station has nothing to lose if the reality of NewsFix turns out to be much more bizarre than the rhetoric we have heard.

If anything, it might be something that Tribune Co. would try in Chicago if they owned WBBM-TV, the station that last week told us their latest change is to bring back “Bill and Walter” as the anchors of one of their evening newscasts – hoping the masses will think it is once again the 1970s when Channel 2 News was the undisputed leader in local news broadcasting.

THAT COMPARISON DOES strike me as having one similarity – 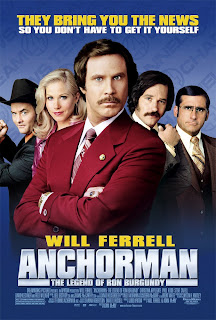 Channel 2 is going back, in part, to “the voice” of Bill Kurtis (whose voice is so prototypical anchorman-ish that he narrated the 2004 film “Anchorman” starring Will Ferrell) to help give their news credibility. Just envision if WBBM were to try a NewsFix using Kurtis as the voice of their narration?

A half hour of Kurtis giving us the news, minus one minute for a Perspective read by Walter Jacobson – giving us his latest take on how big a goofball Rod Blagojevich has become.

It certainly couldn’t be any worse than what the people of Houston will soon be subjected to when they tune in to KIAH-TV.