EXTRA: Rostenkowski evidence that not everything from political past was bad

Dan Rostenkowski,the one-time mighty chairman of Ways and Means whom some people were determined to think of as corrupt even before he go

t busted by the U.S. attorney for the District of Columbia and served just over a year in prison, is gone - having died Wednesday at his residence in Lake Benedict, Wis.

Yet despite the amount of rhetoric we’re going to hear in coming days about corrupt politics and Rostenkowski’s role in it, I must admit my own memories of the Northwest Side politico are largely positive.

PERHAPS IT IS because Rostenkowski, although a loyal member of the Democratic Party, wasn’t an ideologue.

He was sent to Washington in the early 1960s (after having served a short stint in Springfield, Ill.) with instructions from Mayor Daley himself (Richard J., that is. M. was still a schoolboy back then) to look out for Chicago’s interests.

Which is what he largely did, ensuring that his home city got its fair share of federal funding for various projects. Extension of the Chicago Transit Authority’s “blue line” trains to O’Hare International Airport, construction of the Deep Tunnel that ensures sewage does not get into Lake Michigan, significant overhauls of Lake Shore Drive and the Kennedy Expressway are just a few of those projects.

Although the Rostenkowski I remember used to boast of his work on the Tax Reform Act in 1986, which he would say with a touch of pride, “took millions of (low-income) people off the tax rolls altogether.”

YET ROSTENKOWSKI WAS like the politicians of that past era who would play their political games by day, then get along at night. There was none of the personal hatred of the opposition that has tainted so much of modern-day electoral politics.

We’re talking about a man who regarded George Bush, the elder, as a personal friend even before he became the president who succeeded Ronald Reagan. That friendship even extended after Bush was an ex-president and Rostenkowski was serving his prison term.

I even remember the reaction of then-Gov. Jim Edgar when Rostenkowski was defeated in the 1994 elections by one-term Rep. Michael Flanagan, R-Chicago. By that point, Rostenkowski was an indicted politico. It would have been easy for political people with a future to write him off.

Yet Edgar called his defeat a loss for all of Illinois, even though Edgar’s own Republican Party wound up gaining that congressional seat (which likely will make Flanagan the answer to a trivia question for years to come – Who is the last Republican to represent Chicago in Congress?)

IF ANYTHING, THE fact that both Rostenkowski and Rod Blagojevich represented the same part of Chicago in Congress shows how much things have changed. Some will try to dismiss both of them as corrupt politicos (and link George Ryan’s name into the mix as well).

Yet the fact that people (except for the most hard-core ideologues) to this day can still remember positive things associated with Rostenkowski is something that will never happen with Blagojevich – who got impeached and removed from office because his own political allies couldn’t stand him any longer. Blagojevich couldn’t work with anybody.

It was that ability to put aside partisanship and work with all sides to get things done that earned Rostenkowski such praise, and why he should be remembered as more than a convicted mail frauder who served 17 months receiving an “Oxford education” (a sentence at the federal correctional center near Oxford, Wis.). It was also why Bill Clinton, toward the end of his time as president, gave Rostenkowski a presidential pardon.

Now I’m sure there are some people who will dismiss some sentiments. They will claim the things Rostenkowsi accomplished as a government official came at too high a price to taxpayers. They will say the federal funding Chicago received throughout the years were mere “crumbs” compared to what city taxpayers had to cough up.

BUT I CAN’T help but feel most of these people are mere ideologues who are determined to denigrate anything they can’t personally take credit for. They are the people who are willing to put partisanship ahead of getting things done – and I will always believe they are the problem with our current political set-up. 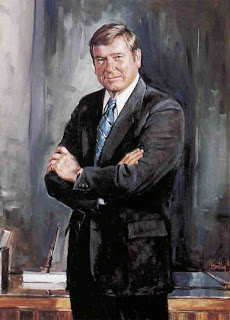 to fame is being married to the guy who gave us World Wrestling Entertainment and such figures as The Rock, Triple-H and Chyna) managed to win a Republican nomination for a seat in the Senate from Connecticut.

She boasts that her political ignorance is her greatest advantage. Her victory comes as the man who reeked of political experience leaves us. The shift in attitude is one that saddens me, and is the reason why I will acknowledge the passing of Rostenkowski with a touch of respect. They don’t make ‘em like Rostenkowski anymore, and that is a fact for which we should express some regret.

It’s even the reason that I will forgive the man for the fact that when I, as a reporter-type person, occasionally dealt with him back in the early 1990s, he never could keep it straight in his head whether my name was “Greg” or “George.”