Is he committing political suicide? 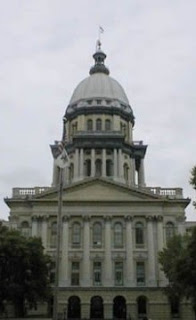 As Mary K. O’Brien (now an appellate court judge) put it, she was free to vote however she wanted on any bill that came up for a final vote in the Legislature. The only obligation she had to Madigan was to promise that her very first vote of the session would be to support Madigan himself for the position of House speaker.

SHE ADMITTED THAT she had to make that promise back during her primary election in order to get Madigan to approve funds from his campaign coffers to bolster her chances of getting elected. She did, and he gave her the money that allowed her to get elected to serve a few terms as a Springfield politico.

All of this is what makes it interesting that a Democratic candidate running for an Illinois House seat is being bold enough to say he has no intention of supporting Madigan to be speaker of the House for the legislative term that runs from 2011-12.

Dennis Ahern, who lives in the Quad Cities and wants to replace Mike Boland (who gave up his legislative seat for an unsuccessful run for lieutenant governor), even gets comical in saying that he would vote to pick a first-term legislator to be the head of the Illinois House for the next two years.

Ahern, at least as far as I can tell from reading the reports published by the Rock Island Argus and Moline Daily Dispatch newspapers, seems to want to make a point that he is not an incumbent member of the Legislature.

HE SEEMS TO want to make people realize that he would be a newcomer, probably because he thinks the people of his legislative district are in a goofy enough mood this year to want to dump anyone – regardless of their actual accomplishments – who has any experience.

Because Boland is a Democrat, my guess is that his Republican challenger, Rich Morthland, is trying to make Ahern an incumbent by association. So Ahern figures he needs to make a drastic statement to show he’s not the incumbent.

Because I really don’t think Ahern is so stupid as to think he can get away with ticking off the man once nicknamed “the Velvet Hammer” by coming out and opposing him so bluntly.

For the fact is that Ahern took money from Madigan’s campaign fund during the primary election season, and has received another infusion since. His hometown newspapers report the figure as $10,000 for each campaign cycle.

WHICH MEANS HE must have made the pledge to Madigan’s people that he would be supportive of one of the few Chicago politicians who went to the Springfield political scene, and enjoyed it enough to want to have his career there – rather than just use it as a training ground to spring up to Congress or back to Chicago and influence at City Hall.

Do we really believe that Ahern is of such a unique mental fiber that he has the gall to take Mike Madigan’s money, then turn around and mess with him?

I honestly believe it is little more than a campaign tactic, particularly since Ahern himself told his hometown newspaper that Madigan’s reaction was to tell him to, “never vote against your constituents.”

MY GUESS IS that if this speaker were from anywhere but Chicago, Ahern wouldn’t even dream of making such a cheap threat as to vote for Anybody But Madigan.

We’ll have too see if it works come Nov. 2. For if Ahern loses, it won’t matter who he would have backed for Illinois House speaker. Then , we will see whether he sticks by his summer-time rhetoric, or whether he is gambling that everyone will have long forgotten what he is saying now.

One reason I am skeptical is because I remember back just over a decade ago, when then state Rep. Susan Garrett, D-Lake Forest, (now, she’s in the Illinois Senate, and supposedly was a serious consideration by Gov. Pat Quinn for lieutenant governor) said in the days after an Election Day that she might not vote for Madigan to be speaker of the Illinois House.

Yet when push came to shove, she backed him. I still recall when that particular vote was taken on the new Legislature’s first day of existence in January. She voted “yes” for Madigan without giving any indication that she had ever considered opposing him. Which makes me wonder if Ahern is destined to become the same story.