The Chicago Sun-Times gave us a news “exclusive” that reeks of the news mentality of decades past. 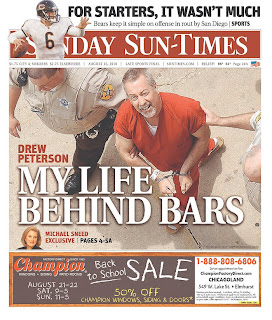 Drew Peterson, the one-time suburban Bolingbrook cop whom many people believe killed two of the four women he has been married to during his life, sent a letter to the Sun-Times, specifically to gossip columnist Michael Sneed. Considering that his telephone access to broadcasters who could put him on the air "live" is largely restricted, this seems to be his lone way of expressing himself.

SHE CAN NOW claim an “exclusive” on a two-part story that she largely didn’t write. The copy that made it into print is largely the text of Peterson’s letter – edited for space – in which he talks about the conditions of his life for the past year in the Will County Jail.

He takes his share of digs at other law enforcement types (he never became an Illinois State Police officer because his parents weren’t brother and sister and wonders if the jail officials who routinely strip-search him ever think about his naked image while having sex with their wives), and also talks about his incarceration itself (the food is “really isn’t that bad,” but “a step down from Army food.”)

By and large, it seems that Peterson believes he is being singled out for abuse by a society that is all prepared to believe the worst about him. It also seems that no matter how much many of us want to think of Rod Blagojevich as some sort of egotistical buffoon that Drew has him beat.

Milorod is Mister Humility compared to the former Bolingbrook police sergeant – who now faces criminal charges connected to the death of his third wife while investigators still try to resolve the disappearance of wife number four a few years ago.

READING THROUGH THE letter gives me a few cutesy details that appease the morbid side of my self-interest. For those who want to know, his cell in protective custody does not have bars. “I’m kept in solitary confinement on the reflective side of two-way glass,” he wrote.

And Peterson did make one observation that makes me wonder – “I haven’t figured out yet if I’m being protected from the other inmates or are they being protective from me?”

While I do realize there probably is some knucklehead currently incarcerated in the jail in Joliet who would think it proves him to be a “Big Man” if he were to shove a shank into Peterson’s back, I wonder how much Peterson’s treatment is so that Will County can avoid the embarrassment of letting something happen to him while he is in their custody.

SOME ARE SICK enough to say publicly they want Peterson to be raped by other inmates, while others say it is insensitive to the public to give Peterson any kind of forum for communicating his thoughts.

My reaction is that this kind of copy seems like something from the days of The Front Page.

Those old-school days of Chicago journalism where being able to publish a real-life letter from a prominent inmate would have been regarded as a major coup for that particular newspaper – and one whose contents would have ensured that the Sun-Times would be having its copy picked up by newspapers across the nation as readers all over would lap up every little detail.

Now I’m sure that some people in the past would have expressed moral indignation at the idea of an inmate letter or diary. But I can’t help but sense we’re moving beyond that stage. Which makes me wonder if this latest column has the potential to cause embarrassment – although maybe not as much as the time then-Chicago broadcaster Giselle Fernandez got on board a speedboat with a convicted drug dealer to do a story about his final days of freedom.

BUT IT WILL be seen as a relic of the way that things used to be done? Which makes me wonder if Sneed is about to become the journalistic equivalent of old-school politicos like Dan Rostenkowski or George Ryan – whom some people argue were sent away to prison for engaging in hard-ball politics today the way they used to be done.

Or maybe that’s an over-reaction on my part.

Because we have enough of the “tabloid” television shows that give us graphic detail about all kind of sordid tales, and we the public seem to lap them up – demanding more while also issuing our meek denials about how offensive we found the whole experience to be. Which means we might not have changed as much as we want to believe we have.

For I have to admit the truth. As much as I want to believe I could care less about Peterson’s legal predicament, I read his whole letter that was published in the Sunday newspaper.