Tax break a quirk, or a political stunt? 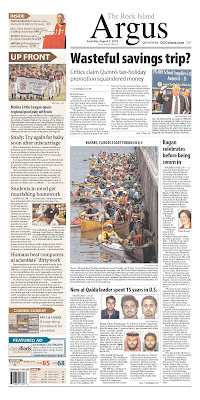 I will be the first to admit that Gov. Pat Quinn’s behavior this past weekend was self-promotional in nature. It’s not like the state government sales tax break saves individuals all that much money.

Yet I can’t help but think that the people who are going out of their way to bash The Mighty Quinn these days have their own self-interest – one that the bulk of us would be best off ignoring.

AT STAKE IS the tax break that began Friday and that will run all this week through Sunday. People purchasing items costing under $100 will only be taxed for the share that the city and county charge – along with any other special fees that might apply to a certain community.

Considering that half of the sales tax currently charged in Chicago is the state’s share, it is significant. We’re talking a five-cent savings for every one dollar of the price of the item. Personally, I got a perk when I did some shopping on Saturday.

The two shirts and pair of shoes would have cost me an extra $3.77 had I had to pay the state’s share of sales tax. That isn’t the biggest savings in the world. But I’m sure at a time when retail stores are eager to attract every bit of business they can get, they’re willing to promote this potential savings all they can.

For the record, the National Retail Federation says the average family will spend $606.40 this week on items affected by the tax break – which will translate into a $30 savings.

WHICH MEANS I view Quinn’s trips to various retail stores and shopping malls across the state on Friday, Saturday and at the Chicago Teacher Store, 1855 N. Milwaukee Ave., on Sunday as a potential promotional event that could help generate some business for retailers across the state.

It’s a cute gesture. Although some people are determined to bash Quinn for using the state sales tax break for his own self-prom

otional interests. As though Quinn got the Legislature to approve the tax break just so he could have a series of freebie stunts to promote his gubernatorial campaign.

When stated that way, it just sounds so absurd.

Yet it is the way some people are insisting on viewing this, and not just Republican gubernatorial challenger William Brady.

THE SMALL NEWSPAPERS publications in Moline and Rock Island (the Rock Island Argus – I like their name) went so far as to lead their Quad Cities-area newspapers this weekend with Wasteful savings trip?: Critics claim Quinn’s tax-holiday promotion squandered money.

I guess that’s what Quinn gets for including a trip on Friday to the K-mart store in Moline as a part of his statewide tour. I won’t be the least bit surprised to learn in a couple of months that the Small Newspapers (which also includes the Daily Journal of Kankakee) has chosen to endorse Brady’s campaign for governor.

Of course, other newspapers (including the Chicago Tribune) used the event to justify publishing pictures of local children having items bought for them as they prepare in coming weeks for yet another year of school.

That actually is the way this particular tax break is being billed – as a benefit to those people who need to buy “school supplies” and new clothes for their children. Even though the reality is that it applies to much more – such as the items I bought for myself during a brief shopping trip I made this weekend.

IT ALSO IS why Quinn included stores ranging from major retailers such as Sears and Office Depot to the much-smaller scale Fred’s Hometown Discount Store in Marion or The School Store in Bloomington.

This stunt doesn’t strike me as a stunt so much as one of the perks of incumbency – which is something that Quinn gets just for having had to endure the ordeals of trying to manage Illinois state government finances. 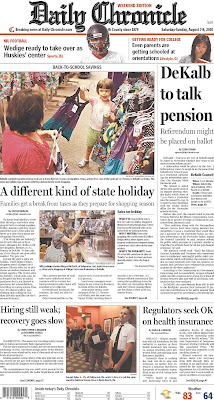 Those are the finances that are so messed up that the parody publication The Onion has published an account of how state government is going into the business of making pornographic films (Little Sluts on the Prairie) in order to raise the kind of money needed to balance the state’s budget.

So for those of you who can’t comprehend the concept of parody, Quinn never really said (in part), “no one’s stepped up to fund Illinois’ special-education programs or infrastructure improvements, so we have to do what we have to do.” Although, it sounds like the kind of line that Quinn might use to justify his latest actions.

WHAT QUINN REALLY did was to make the rounds of retailers this weekend, in hopes that he could help promote sales this coming week – which while giving a hit to the state’s sales tax revenues, does have the potential to bolster actual sales.

Which would make the retailers themselves happy. Perhaps that is the Quinn strategy – get the store owners’ votes come Nov. 2.