Sammy Sosa had just hit a home run (his 62nd of the season), and I still remember those words coming from a baseball “fan” who happened to be sitting in front of me at Wrigley Field on Oct. 5, 2001 as we both watched the Chicago Cubs lose 3-2 to the Pittsburgh Pirates. 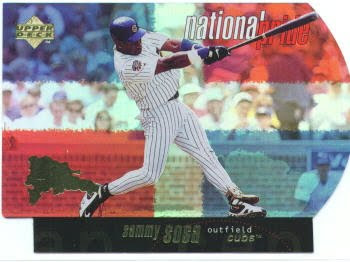 Sammy Sosa, from back in the days when he was the Dominican Republic's gift to baseball and to the North Side of Chicago.

I REMEMBER THAT game largely because it was the final weekend of the season. The only reason I went was because the Chicago White Sox had already played all of their home games and were on the road for the final week. In order to indulge myself one last ballgame for the 2001 season, I had to settle for the Cubs.

Personally, I cared less about Sosa. A part of me shared the disdain felt back then only by many White Sox fans that somehow, the whole Sammy Sosa phenomenon that had overtaken baseball and in the process made the Chicago Cubs one of the game’s most visible franchises was a fraud.

Now, everybody who follows baseball talks about Sosa like White Sox fans used to, probably even that guy who sat in front of me some nine years ago but whom I haven’t seen or heard from since.

The reason for that bashing, of course, is the fact that many fans want to believe that steroids have tainted the game and made all those home run statistics that got recorded in the early 2000s somehow illegitimate.

SOSA, OF COURSE, thinks he’s the victim. He still wants to be loved by the city of Chicago, even though White Sox fans gloat at the thought of him and Cubs fans don’t want to have to face the fact that their teams from that era weren’t anything special (they didn’t win a thing, and some of them barely avoided losing 100 games per season).

Chicago magazine got an interview with him where he says the Cubs “threw me into the fire” and make people think he is a “monster.”

I’ll be the first to admit that Sammy Sosa is not a monster. He’s a baboso. A man who tried to turn himself into a real life copy of Garrett Morris’ Chico Escuela character.

Now that “beisbol is not berry, berry goo” to Sammy, he’s miffed.

I’LL ALSO AGREE with his comment that no one can take away the statistics, which have to be acknowledged regardless of what one thinks about the whole concept of steroids (I think that ballplayers using steroids take a serious chance of screwing up their bodies far worse than any punishment fans could impose with their indignation).

Sosa is, after all, one of only about a half dozen people out of the tens of thousands who have played major league ball in the United States to hit more than 600 home runs. He also is the only player to ever hit 60 or more home runs three times.

In theory, he is the personification of what a Baseball Hall of Fame ballplayer should be. The “controversy” should be whether or not the officials at the Hall of Fame’s museum in Cooperstown, N.Y., manage to get his name correct on his bronze plaque. It’s Samuel Kevin Sosa Peralta, and if you think I’m kidding, keep in mind that for a couple of decades, Roberto Clemente’s bronze plaque misidentified him.

Yet in what is probably the biggest piece of proof that Sosa wasn’t all he was cracked up to be (he was a crummy outfielder who couldn’t throw that well, and was so obsessed with hitting home runs that his other hitting skills deteriorated) was that fact that in NONE of those three seasons (1998, 1999 and 2001) that he hit 60 or more home runs did he lead his own league.

MARK McGWIRE, MARK McGwire and Barry Bonds are in the record books as the home run champions of the National League for each of those three seasons respectively.

I’m sure a lot of Cubs fans are going to read about Sosa’s diatribe (or more likely hear about it, since many of them will be too cheap to shell out $4.99 to buy a copy of the magazine) and are going to get all defensive. They’re going to claim that Sosa brought all of his indignation upon himself.

We’re going to hear over and over about how the 2004 season ended with Sosa leaving Wrigley Field before the end of the season’s final game, and how that alone ought to wipe out all of the good will that Sosa had built up – to the point where he would openly say he is the real “Mr. Cub” instead of Ernie Banks.

Yet a part of me can’t help but think that Sosa has a point, and that the level to which the Cubs seem to want to think of Sosa as persona non grata is extreme.

THE TEAM WAS more than willing to put up with Sammy’s enormous ego back when he was smacking all those wind-blown home runs into the Wrigley Field bleachers, or mugging for the television cameras with his ritual cap touches and blown kisses (I still remember the indignation that was dumped on the White Sox’ then-shortstop Jose Valentin when he dared to mimick Sosa for the television cameras).

Should we now proclaim Jose a hero for his actions? I'm not willing to go that far, but Cubs fans lapped up Sosa too much then for them to now be allowed to get away with going into denial.

Because while Sammy may be a little goofy, the Cubs’ treatment of him these days does reek of the old Soviet mentality of trying to rewrite history, thereby turning Sosa into a non-person.