By leaving now, Lou Piniella gets to ensure that he won’t wind up as just another losing manager of the Chicago Cubs. 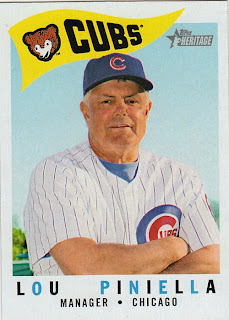 As things stand, in his 3 ¾ seasons as the boss on the playing field, his teams managed to win 52 percent of their games. Although the way things are going this season, there was a slight chance (if they had lost 31 of their final 38 games) that the team’s overall record under Piniella would drop below a winning record.

IF ANYONE IS capable of putting together that big a streak to finish a season, it is the Chicago Cubs (although after seeing the White Sox Saturday night blow their first game in extra innings, then give up a lead in the 9th inning of a second game, I wonder about them as well).

So Piniella, the man who played in four World Series with the New York Yankees and managed in one other with the Cincinnati Reds, along with being the manager when the Seattle Mariners reached a point in their history when they were actually a significant franchise, is now on his way back to Florida (he’s a life-long Tampa area resident). Sunday against the Atlanta Braves will be his last game in a Chicago uniform.

Which likely clears the way for one-time star second baseman Ryne Sandberg to take over the team, which I will admit intrigues me because it will place both of Chicago’s major league ballclubs in the hands of their star middle infielders from the 1980s.

Ryno versus Ozzie Guillen. That will be a personafication debate for the future.

FOR NOW, I can’t help but look back at Piniella, whom I must admit was a favorite ballplayer of mine when I was a kid – and whom I got to interview as a reporter-type back in 2000 when his Seattle Mariners knocked the White Sox out of the playoffs that year in three straight games.

A part of me always wondered just how much an association with the Chicago Cubs would wind up besmirching his overall record. 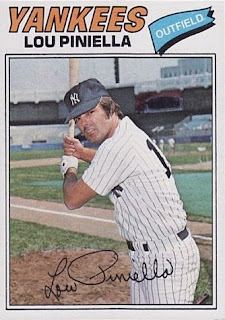 For all those people who thought that Piniella was somehow bringing New York Yankee-like vibes to Wrigley Field, I’d argue that the drag of the Cubs always seems to overcome that. Yankee ties didn’t make Gene Michael (114-124 in 1986-87) a winning Cubs manager, and I know those people who like to think that the reason the Yankees themselves didn’t win the World Series in 1981 was because they had made the mistake of reacquiring outfielder Bobby Murcer from the Cubs.

Even though Murcer always thought of himself as a long-time Yankee who succeeded Mickey Mantle in center field, that trade made him the requisite third ex-Cub on that ’81 ballclub, thereby allowing the “Ex-Cub Factor” to kick in and even take down the mighty Yankees.

AS FAR AS Piniella is concerned, I don’t think he did quite as much damage to his reputation. He did win those two division titles. And he is he first Cubs manager to walk away from the team with a winning record in quite a while.

It will be just another set of circumstances that helped add a few years to what baseball writer George Castle called the “The Million-To-One Team,” the title of his book about the Cubs and what Castle said were the odds any team would have to overcome to be as unsuccessful over such a long period of time as the Cubs have been.

Too many people will remember Piniella’s Yankees playing days (and all those water coolers that got smashed amidst Lou's fiery temper), particularly that moment in the 1978 tie-breaking playoff against the Red Sox when he managed to stop a base hit in the sun by Jerry Remy from becoming more than a harmless single. Had Piniella lost sight of the ball and Remy had managed to get extra bases, there’s a good chance that shortstop Bucky Dent’s monumental home run in that game wouldn’t have meant much of anything.

Others will remember his fiery temperament in Cincinnati and in Seattle, particularly in 2001 when he managed a team to 116 regular season wins (still a record), although that team wound up falling short to the Yankees themselves.

SO HERE IS hoping that Lou enjoys retirement, since I doubt he is going to latch onto any other ballclubs. It seems now that the managers of major league baseball clubs are the guys roughly my own age (Ozzie is 46, Ryne will turn 51 next month) who were ballplayers when I was in college and a young reporter-type person in Chicago, rather than the ones who were ballplayers when I was a kid.

Here also is hoping that Lou’s mother, whom he cited as part of his reason for not finishing out the season, recovers from her illnesses.

EDITOR’S NOTE: With Sunday’s 16-5 loss to the Atlanta Braves, the Chicago Cubs complete the Lou Piniella era with an overall record of 316-293. Mike Quade begins his managerial stint meant to finish off the season on Monday against the Washington Nationals. The real competition is to see if Quade becomes even less memorable a Cubs manager than Jim Essian (part of 1991).
Posted by Gregory Tejeda at 12:15 PM