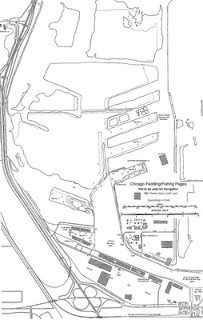 Excuse me for finding it very believable that an Asian carp found earlier this summer in Lake Calumet was likely planted there by another human being.

It just always struck me as being very unlikely that one of the carp had managed to make it so far north undetected past all the security measures that the Army Corps of Engineers put in place to keep the invasive species away from Lake Michigan.

NOT THAT I’M saying I have complete faith in the federal government’s efforts to control the Asian carp’s movement. I’m sure anything is penetrable.

But it just struck me as completely odd that the Asian carp went from being seen out around Will County, then suddenly was discovered within the Chicago city limits only six miles from the Great Lake (which is the target that the environmentalists are dreading that the carp will get to someday).

So reading the reports this week about how it is suspected that somebody deliberately put the Asian carp into Lake Calumet is reassurring. In addition to scary.

It is reassuring in that it means the security measures – including those electronic barriers that are supposed to keep the carp back – didn’t necessarily fail. It may turn out that it won’t be a federal government failure that prevents the Asian carp from someday getting through the Chicago Sanitary & Ship Canal to Lake Michigan, from where they could eventually spread throughout the Great Lakes.

BUT IT SCARES me that, despite all the word that has gotten out about the potential threat from the Asian carp, someone would think so little of the concerns that they would go so far as to put a carp into Lake Calumet on purpose.

It makes me wonder if a person who would deliberately put an Asian carp into the lake is the same type of person who thinks it all a batch of hooey that man ever walked on the moon – stories about the carp killing the lake’s ecosystem are for people gullible enough to not see the “wires” on the footage that purports to be Neil Armstrong and Buzz Aldrin walking on a rock in the cosmos.

Although I’d have to admit that I’d rather believe it was somebody’s naïve foolishness that caused the carp to get into the lake, rather than someone’s malicious intent. Because then we’d be talking about possible criminal activity, although I can already imagine the late night TV crowd having a field day if someone were actually hit with criminal charges and brought to trial for planting a fish in the lake.

As for the conservative pundit crowd, they’ll probably decree it “God’s punishment” to Chicago for being so Democratic Party-oriented for so many years.

IN SHORT, ONLY nonsense can result from this situation.

The only thing those researchers are sure of is that the three-foot-long Asian carp (weighing about 20 pounds) found back in June had spent nearly all of its life on the “wrong” side of the electronic barrier that is meant to keep the carp out of the Chicago area altogether.

The only thing I am sure of (aside from the nonsense factor) is that I doubt this story will change anybody’s mind about the whole Asian carp conundrum.

PEOPLE FROM ACROSS the Midwestern U.S. who are determined to think of this situation as “Chicago’s fault” are still going to persist in thinking that, and they’re likely to continue to push for those measures that close off Lake Michigan’s access to the rivers that connect it to the Mississippi River – even though it is that access that largely drives the Great Lakes states’ economies.

Closing off that access would wind up backfiring and hurting all of the region. Unlike the way people in Michigan (which seems to be particularly nasty in the way they’re pursuing this issue) think, they’d wind up hurting themselves and everybody else around them by persisting in legal actions meant to cut off the access (which allows for shipment of goods and helps bolster the local economy at a time when we need every advantage we can get).

Officials with the Alliance for the Great Lakes went so far as to tell the Chicago Sun-Times that this latest discovery is not a “game-changer either way.” I’m inclined to agree.

But the sad part is that I almost am resigned to the fact that the Asian carp are likely to find a way to get into Lake Michigan, and the Great Lakes, eventually. It probably will be the human factor that allows it to happen someday.

WHICH MEANS I am bracing myself for the eventual trial of somebody facing charges related to the ecological devastation of the natural wildlife in the Great Lakes.

One of the first major “stories” I covered as a professional reporter-type person was the shooting rampage by Laurie Dann some 22 years ago in the North Shore suburbs. Perhaps one of the last stories I will cover will be the future trial of a “Great Lakes terrorist” whose crime was letting a fish loose into the lake when he shouldn’t have.