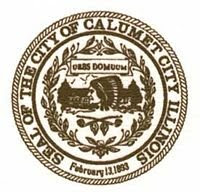 nted to do away with the sinful image his hometown had throughout the Chicago area.

Calumet City was the place with a string of bars and strip clubs located just west of State Line Road, with some of those clubs having direct historic ties to the days of Al Capone. The State Street (not to be confused with Chicago's Great Street) strip was a place that respectable people avoided (and where Gary Dotson got arrested in the 1980s just after being released from prison for a rape conviction-turned-flawed).

THE MAYOR DECIDED his town couldn’t be criticized for promoting sin if there was no sin present. So he literally shut down the bars and had them bulldozed into a large plot of land, claiming he was creating an industrial park to bring significant business to the area’s economy.

The last time I drove through the area, it remained an empty blot that one passed through just before crossing the street into Indiana, where garishly-lit-with-neon stores promoting cheap pop, cigarettes and fireworks beckoned to Illinoisans.

And that mayor is long gone, having run a pitiful attempt to become Illinois treasurer in 1998, then getting himself busted for government corruption and being forced to serve a couple of years in federal prison.

MY POINT IN reciting this quickie moment of Calumet City history is to say that this is not a prissy town. Not now. Not when I lived there some 30 years ago. Not ever.

Although it has turned from a white ethnic place to a majority African-American population, it remains middle-to-low income. It is a place that could use an economic boost, and isn’t particular about where the cash comes from as long as it’s green.

So if anybody thinks that bringing in a few preachers and other moralists to talk of the evils of gambling is going to persuade the local political people from wanting a casino in their town, they must be heavily intoxicated.

For it is true. Calumet City is one of the places that is desperate get the state’s attention to have a casino placed within their boundaries. Current state law permits up to 10 licensed casinos to exist, but there are only nine currently in operation.

UP HEAR O’HARE International Airport, Rosemont is trying again to get that 10th gambling boat license, while other groups also are working with companies that would operate casinos within their towns.

One group that wants to place a casino in the southwest suburb of Stickney literally has hired former Chicago Bears coach Mike Ditka to talk about how “wunnerful” it would be to place the casino down by the Hawthorne Race Course.

Just imagine, playing the ponies and the slots, all in one place. It might actually make you forget for a few seconds that you’re gambling near the Metropolitan Water Reclamation District’s sewage treatment plant that happens to be the largest such facility in the world.

But then, there’s Calumet City, which is trying to spin its proposal in a context of doing the state of Illinois a great service by having a casino within its boundaries.

AS THINGS CURRENTLY stand, many people on the South Side and surrounding suburbs get in their cars and drive east on Interstate 80 or the Chicago Skyway toll road into Indiana when they feel the need to gamble.

Casino boats in Hammond and East Chicago within site (and sometimes smell) of the steel mills and oil refineries draw millions of dollars in tax revenues for their hometowns – money which could have been spent in Illinois if there was a southern Chicago-area gambling site other than the casinos in Joliet.

Calumet City’s officials claim they would literally be able to stop people from venturing to the unsophisticated side of State Line Road, while still allowing them to be able to fulfill their personal need to dump all their money into Illinois-based slot machines or on card games, roulette wheels or whatever particular game of chance is their preference.

Personally, I’m skeptical. And that’s largely because I remember the reason that the 10th riverboat casino that used to exist wound up failing financially.

IT WAS CALLED the Silver Eagle. It was a gambling boat moored in the Mississippi River at East Dubuque, Ill., which means it was located just across the river from Dubuque, Iowa, which had its own casinos.

Now perhaps it is the “American Way” that the people choose which businesses they want to patronize, and those that do not appeal to the public go broke. That’s what happened to the Silver Eagle, which was consistently the Illinois gambling boat with the lowest gross income when it existed in the 1990s.

It had a lot to do with the rules under which Illinois casino boats operated. At the time, they had to offer cruises of the river, while Iowa’s boats remained in dock all the time. Illinois’ boats were under the pretense of being cruises where some gambling took place. Iowa just came out and admitted that the boats were places where no one should be shocked to find gambling taking place.

People who derive pleasure from visiting casinos chose to gamble in Iowa, even those who lived in Illinois. It is this same reason that the gambling boat in Rock Island always has faced stiff competition from gambling operations in Iowa, and where the Casino Queen of East St. Louis has to ensure it does not fall behind gambling in Missouri.

MY POINT IS to say that it is likely the hard-core gamblers who don’t care about any of the frills and just want to live out a dream that someday, they’ll hit a huge score will go to the casino that puts up the least resistance. Illinois laws regarding casinos are meant to put up resistance.

I suspect that makes the Hammond and East Chicago sites of more appeal than any gambling boat in Calumet City would ever be. I’ve already heard some people point out that a casino in Illinois would have to comply with the public smoking restrictions that do not exist in Indiana.

Would a Calumet City casino become the place where people snicker for a second before crossing over the state line on their way to East Chicago or Hammond? It wouldn’t surprise me in the least.

And it also wouldn’t shock me to learn that a Calumet City casino could suffer the same fate as the Silver Eagle.

BESIDES, THERE’S ONE other point. The same people who desperately wanted a casino to be built in Rosemont (near O’Hare and hotels where tourists stay) will make the same argument now that a casino meant to take people’s money should be built in a place convenient to where those people actually are.

So if I had to bet money, I’d place it on Rosemont. Who’s to say how the local politicos there will be able to influence their state counterparts to see the benefit of bright, shiny lights from a casino helping to guide planes into O’Hare, then guide those passengers to the slots – where they can go for broke.

Maybe they’ll even figure out a way for people merely making a connection at O’Hare and waiting for another flight to make a quick trip to the casino.

Isn’t that a pleasant memory for people to take from Chicago?

Seven companies are submitting bids to the Illinois Gaming Board seeking to control the last license currently available to (http://www.chicagotribune.com/news/local/chi-casino_bidsoct16,0,3058513.story) operate a gambling boat in this state.

How many towns openly include the name “Al Capone” among a list of prominent people (http://www.calumetcity.org/history.html) who helped shape their municipal character? How many towns think a name change will significantly alter their (http://www.encyclopedia.chicagohistory.org/pages/204.html) character?
Posted by Gregory Tejeda at 12:01 AM

I like your writing, I found it very interesting and informative. I agree I'd place my bet on Rosemont also. I like the odds!!!