No ball game today in Chicago!

A question to be pondered by Chicagoans on bot 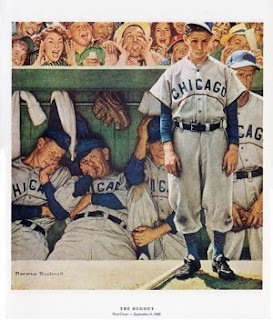 h sides of the baseball partisan split. Which concept is more depressing?

Is it the sight of all those unsold souvenir books in bookstores and supermarkets proclaiming "This is the Year!" that no one wants because it reminds Cubs fans of just how quickly (and tackily) their ball club failed in the National League playoffs this year?

OR IS IT the lack of a sight of similar souvenir books celebrating the fact that the White Sox also won a division title in 2008, and did so with a truly historic flourish at season's end? But because of the way the White Sox barely lasted longer than the Cubs in American League playoff action, there was no time to put something together.

I can't think of any White Sox fan who's that anxious to buy something now. You can't even find caps with a patch or t-shirts proclaiming the 2008 A.L. Central Division champions. And those Cubs shirts and caps that were mass-produced out of a delusion that this truly WAS the year are already marked down significantly in price.

It just means we're shifting attention to next year.