Who needs enemies, when friends cause political people just as much trouble?

It is becoming easier these days for a political type to take the high road on the campaign trail – it seems that he can count on someone else to do the dirty work of making the wild accusations against their opponents.

Take the presidential campaign, where Republican John McCain can openly say he doesn’t like to hear such talk that his Democratic opponent, Barack Obama, is a Muslim.

THE LOS ANGELES Times reported that at a recent rally in Minnesota, one of McCain’s followers called Obama an “Arab” (intending it as a pejorative), to which McCain could apologize and say Obama is, “a decent … family man” (as though Arabs don’t care about family).

Chances are good all those people who attended the rally will have the crack about “Arabs” stick in their minds, and will view McCain’s response as just one of those things that has to be said, even if it isn’t really meant.

This isn’t to say that only Republican supporters are capable of saying mean-spirited things.

How else to view the comments of Rep. John Lewis, D-Ga., who recently said that McCain’s campaign comments of recent weeks have reached the same level of mean-spiritednes 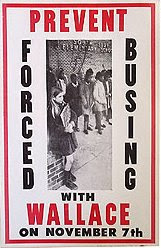 THAT CRACK WAS outrageous enough that Obama felt the need to have his campaign issue a written statement saying that the junior senator from Illinois does not really believe McCain is as outrageous a character as was Wallace – the man who once justified his racial segregationist rhetoric by saying he didn’t want to be “out-n---ered” on issues by white supremacist political opponents.

The fact is that we have reached the point in this campaign season (just over three weeks until the Nov. 4 elections) in which the most memorable moments are likely to come from outside the two campaigns.

We’re more likely to hear many more instances of candidates trying to distance themselves from things other people said. And if there is a “gaffe,” it will be that someone did not sufficiently apologize for someone else’s stupid wisecrack.

Take a weekend rally in Johnstown, Penn., where Republican vice presidential hopeful Sarah Palin spoke to a crowd of GOP true believers (the only kinds of people she’s allowed to speak to these days, McCain handles the non-decisive types himself).

ONE OF THE people in the Palin crowd made a production of waiving about a stuffed doll of a monkey – one which had an Obama campaign sticker wrapped around its forehead like a headband.

Palin’s reaction was to pretend not to see it, which allowed those in the crowd to get their laughs uninterrupted.

It is responses (or non-responses) like that which cause some people to think that the Republican presidential campaign is determined to play race as an issue (and have the gall to accuse anyone who points this out as being the one who is playing “the race card.”)

Of course, this should not be a surprise, since the reason that the socially conservative Alaska governor was brought onto the Republican presidential ticket was to speak to the true believers of the right. To expect her to apologize is to be absurd. Apologizing is McCain’s job.

PALIN IS JUST a high-ranking person who can say the outrageous things that will get the GOP faithful worked up enough to go out to the polls on Election Day. That is what Palin’s continued rants about Obama being friends with “terrorist” Bill Ayers is really all about – even she isn’t vapid enough to believe what she says.

But then, there also are the incidents where someone truly “out of the loop” will say or write something that gets people all worked up – and puts the campaign in a tight spot. In such cases, the common-sense thing is to ignore the comment, even though it will get opponents so worked up that common sense would also demand some type of response.

That is the best way to view the continued writings of former Cuba leader Fidel Castro, who continues to write a column of commentary for Granma (the official Communist government newspaper named for the boat Castro and his followers used to start their revolution).

In an English translation offered up by Granma’s website, Castro wrote that racism is the only reason McCain has a chance to defeat Obama next month. While it is true that race is the issue in this campaign that no one wants to talk about for fear of exaggerating its importance, Castro is guilty of overkill.

HE CALLS McCAIN “bellicose” and says it is “a miracle” that someone has not seriously tried to kill Obama, similar to the fate suffered by Rev. Martin Luther King Jr. or Malcolm X.

“Millions of whites cannot reconcile in their minds with the idea that a black man and his wife and children would move into the White House, which is called just like that – White,” Castro wrote. 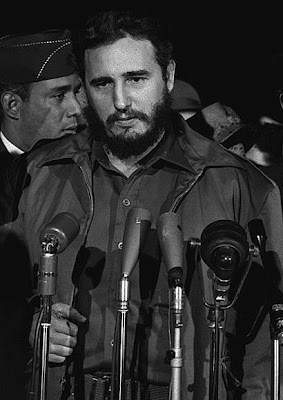 Either somebody needs to gag Fidel Castro, or we need to realize he's a political has-been who should be ignored. Photograph provided by Library of Congress collection.

Aside from the issue that this translation might not be accurate (some pundits are insisting Castro’s original copy written in Spanish is even more inflammatory), this has to be a headache for Obama – the candidate who naively thought at one point that he could run a campaign without referring to race because he is a post-1960s person.

Does Obama really want to issue a statement saying that Fidel Castro is full of it? Because by doing so, he turns the opinions of the long-time Cuban leader into an issue and reminds people that he once included current Cuba leader Raul Castro on a list of controversial world leaders with whom he would be willing to meet in hopes of achieving peace.

BUT BY IGNORING Fidel, he gives the social conservatives who are going to use this rhetoric regardless of Obama’s response a charge that Obama is ditching an issue.

Either way, he’s going to get trashed. Almost as badly as McCain is going to be every time some ding-dong GOP follower lets his support cross over the line into racist rhetoric.

And both campaigns will wind up going overboard in their purchases of Tylenol to cope with all the headaches both candidates will suffer from in coming weeks because of their “so-called” friends.

EDITOR’S NOTES: Fidel Castro belongs in the category of “Oh, Be Quiet” for his (http://economictimes.indiatimes.com/News/PoliticsNation/Castro_says_its_a_miracle_Obama_hasnt_been_assassinated/articleshow/3587065.cms) recent column about racial attitudes toward Barack Obama.

Both Obama and opponent John McCain have had to issue apologies, of sorts, for comments (http://www.latimes.com/news/nationworld/nation/la-na-campaign12-2008oct12,0,4050738.story) made by people who are supportive of their campaigns (http://www.cnn.com/2008/POLITICS/10/12/mccain.lewis/?iref=mpstoryview). Just imagine what their enemies would say?
Posted by Gregory Tejeda at 12:01 AM