Who pays to use Grant Park? 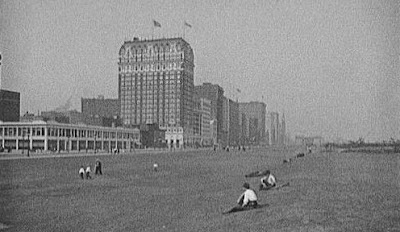 Grant Park on Nov. 4 will be significantly more crowded than it was on this early 20th Century afternoon. Photograph provided by Library of Congress collection.

I’ll be honest. I’m considering joining the crowd that is going to converge on Grant Park come the night of Nov. 4.

Many of the people who will show up in downtown Chicago that night want to be able to say they were on hand and physically in the presence of Barack Obama (no matter how minute that presence really is) at the point when Obama learned for sure whether he will become U.S. president number 44.

BUT I’M NOT going to be one of the people who pays the Obama campaign possibly up to $1,900 to be able to work that night out of a special press area that will include the telephone lines and other utilities required to be able to file intelligible copy for publication in newspapers around the world.

Nor am I going to be one of the people looking to get into the auxiliary press area, which costs nothing, but also does not provide any direct access to the candidate or his campaign staff.

Personally, I can understand why newsgathering organizations should have to foot some of the bill when it comes to setting up a press area. It doesn’t strike me as being any different than Mayor Richard M. Daley expecting the Obama campaign to reimburse the city for all the added security that will ensure the 1-million-plus crowd of Obama fans doesn’t become a 1-million-plus riot.

Most of the debate that has occurred in recent days about whether it is justifiable to charge companies is really nothing more than quibbling over price. Publishers who might not mind kicking in a couple hundred bucks object to a fee of nearly a couple thousand.

FROM MY PERSPECTIVE, any interest I have in the Grant Park scene on Nov. 4 is going to be focused on the people who show up. I’m curious to know what goes through the mind of someone that they feel compelled to be there – especially if they have no personal tie to the candidate.

I know the Obama campaign itself is concerned that people who are supposed to be working Election Day on turning out the vote in Indiana and Wisconsin will cut their work short that day so they can be on hand at Grant Park – which could cost Obama some late-in-the-day votes in those two battleground states.

The whole affair strikes me as being almost as ridiculous as those people who converge outside a sports stadium when the home team wins “the big game.” They didn’t see the game, but they want to “be there,” particularly if there are taverns in the neighborhood.

And if the Obama scene were to become an unruly mob, then I would want to see it for myself.

IF IT SOUNDS like I would be working the crowd of Obama supporters (and perhaps a person or two who couldn’t get out of downtown Chicago in time to beat the evening rush of people INTO the city), that is correct.

I don’t need to shell out significant amounts of money just to hear David Axelrod or other Obama campaign officials try to influence me with their rhetorical “spin.” I can figure out for myself what the results mean, without being told what to think they should mean.

And it’s not like I’m going to need the working conditions to file my copy the way reporters with some national newspapers will. For them, the telephone lines are the primary purpose of a press area (transmitting copy via a cellular telephone is a pain in the butt if you are trying to send anything longer than 20 words).

It actually reminds me of a “big event” assignment I once covered for United Press International – the day in June 2001 when the federal government put Timothy McVeigh to death at the prison in Terre Haute, Ind.

THE FEDERAL GOVERNMENT contracted out to a private company to “deal” with the logistics of reporter-types from across the country focusing attention on the prison. I remember UPI being hit with a bill for the services, which wound up amounting to a special tent set up within the security perimeter set up by the Bureau of Prisons to ensure that right wing activists inclined to think of McVeigh as some sort of anti-government hero would not attack the prison.

In that tent, I got use of a telephone line all to myself, along with a table and chair, and some of the doughiest-tasting pizza I have ever had. But when one is in the middle of trying to find out what McVeigh was having for a final meal (two pints of mint chocolate chip ice cream, for anyone who cares to know), anything edible was appreciated.

Excuse me for thinking that the circumstances are not all that different. Reporter types covering the candidate on Election Night are going to want to have some place to work at the scene. After all, it’s not like they can return to an “office” to file their copy.

SO WHAT IS the significance of what will be written about that night in Grant Park?

Using the public park on the Chicago lakefront (with the downtown skyline in the background) would give an Obama celebration a character unique to a campaign victory party.

The point of all of this is to provide a scenic backdrop for the candidate when he makes his victory/concession speech –which is timed to air live on the late night television newscasts.

CAN WE REALLY be surprised that the Barack backers who turned a Denver football stadium into a nomination acceptance speech, and also has attracted hundreds of thousands of people to rallies in St. Louis (with the Gateway Arch in the background) and Berlin would come up with a culminating campaign spectacle set in Chicago?

And we all know that no matter how many people really show up, someone will come up with a type of mathematics that allows the crowd size for an Obama rally to be estimated at 1-million-plus.

If anything, I am most amused that the news coverage of the announcement that Obama was going to use Grant Park for his celebration/concession makes mention of the fact that Pope John Paul II also used the same site (and stage) when he visited Chicago in 1979 and held a city-wide papal mass.

Some people joke that Obama is trying to compare himself in stature to the Pope. Some conservative pundits are trying to make an issue out of Obama having the “audacity” to put himself on that level, although if that were truly the case, then it would be sacrilegious to hold the annual music festivals in Grant Park.

BUT WHEN IT comes to the priorities of many Chicagoans, there is another figure of prominence who has walked that same stage. The Chicago Bulls basketball team used that site to celebrate their six NBA titles in the 1990s.

Even if Obama becomes the first U.S. president from Chicago, Michael Jordan will always remain primary in the hearts and minds of our residents.

Reporter-types are being expected to pay (http://www.poynter.org/column.asp?id=2&aid=152696) for the working space set up within Grant Park enabling them to file copy for publication on Nov. 5.

Officials are beginning now to ready Grant Park for its use by the Obama presidential campaign (http://cbs2chicago.com/local/obama.event.grant.2.846677.html) 12 days from now.

It would be difficult for an Obama Election Night rally in Grant Park to be more gauche than the annual food festival known as the Taste of Chicago. Photograph provided by State of Illinois. 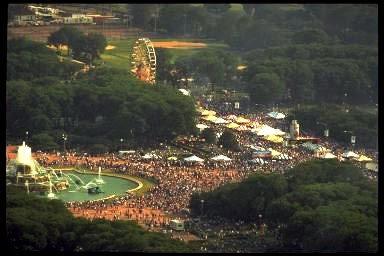