It has been more than two decades, but I still remember the show vividly. 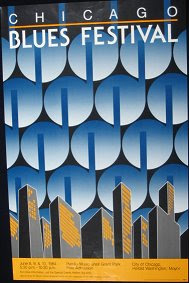 ago blues singer Koko Taylor, along with guitar player/singers John Hammond and Stevie Ray Vaughn were all on the bill.

FOR SOMEONE WHO enjoys the music of jazz and blues, any one of those performers is a big enough name to command a stage and put on a quality performance.

But I got to see all three (one right after the other), with doses of Sugar Blue (the singer) and Luther “Guitar Junior” Johnson mixed in as well.

And what made this particular night so memorable is that it happened in Chicago at the city’s blues festival. Which means I got to see all of this for free, while sitting in the shadows created by the downtown city skyline.

In fact, I remember that evening because I wound up sitting next to an attractive brunette from out-of-town (I want to say she was from Dayton, Ohio, but my m 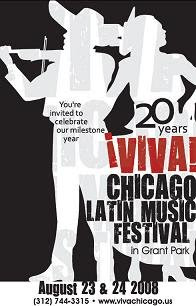 emory’s not sure), who couldn’t get over the fact when I told her this was an annual city festival, and one of several held each year.

“MY HOME CITY would never think to do that,” she said. “This is special.”

For earlier this week, the city let it be known that the Jazz Festival and Blues Festival (both of which consist of four days of music performed on various stages in and around Grant Park) are going to be scaled back.

No specifics were offered, but I would expect these will now be two-day festivals. And many of the side stages that allowed people to see lesser (but still enjoyable) acts, will be reduced – if not eliminated altogether.

OF COURSE, IT’S not just jazz and blues. All of the city’s summer festivals are in line to be slashed – even the events that were already just two-day affairs.

Could we wind up with a one-day-long Viva Latin Music Fest? Or just a few hours of Celtic Fest? And that “Mayor’s Cup Soccer Festival” that was created just a few years ago to help promote interest among the various youth leagues throughout the city could also shrink.

Now I am enough of a realist to appreciate the budgetary adage, “You can’t spend what you don’t have.”

With the financial problems that Chicago city government thinks it is going to have to confront in upcoming months, I would expect these cuts are just the first of many programs and services that will be scaled back in dimension.

SO I’M NOT under any delusion that this commentary in any way will persuade anyone to reconsider their vote to hack away at the programming offered during the annual blues and jazz festivals (which in their own way served as markers of the beginning and end – respectively – of the summer festival season in Grant Park).

If anything, this is meant more to mourn their loss. Because those festivals actually helped in their own way to enhance the cultural image of Chicago, even though in recent years some of the musical purists (some might say snobs) were complaining that the quality of acts was in decline.

That fact was largely due to increasing costs of getting musical acts to perform. The fact is that while no admission was charged to sit in the park and listen to music, people were still getting paid for their work.

That meant these festivals were being operated at a financial loss by the city. It was a loss the city was putting up with because it helped boost its cultural image. But city officials say they just can’t see spending so much money to promote events that don’t bring in significant income for Chicago municipal government.

I STILL THOUGHT the festivals were intriguing, even with the so-called lower level of acts.

Admittedly, the days of 1985 (the year that Hammond, Taylor and Vaughn performed together at the Chicago Blues Fest) were long-gone. Nobody would be able to put that bill together for the Chicago Festival today (and not just because Vaughn is dead, having been killed in a helicopter crash after performing at Alpine Valley in East Troy, Wis.).

In fact, that evening was unusual even for the Chicago Blues Fest. But all of those musicians had performed together in July 1982 at the Montreux Jazz Festival and had given a performance that was considered, if not historic, then memorable.

It was considered worthy enough to be preserved on an LP (“Blues Explosion,” Atlantic Records) that is still one of my favorites.

THE FACT THAT Chicago Blues Fest officials would attempt to recreate a memorable musical evening (minus J.B. Hutto, who died in between the Montreux and Chicago events) on their own stage shows that the Chicago festivals at their best had some ambition – and were not just some neighborhood festival with a few no-name crackpots playing saxophone very badly (as some dimwits like to try to dismiss the music festivals).

Chicago’s festivals still offered up the chance for enjoyable musical acts, which bolstered the mindsets of our city’s residents – and the image that the tourists who happened to be visiting Chicago took away with them of our city.

I can recall hearing quality piano players such as Wynton Marsalis and Ramsay Lewis – both of whom are capable of commanding significant rates to perform in the largest concert halls. But I saw and heard them at the Jazz Festival.

SO I DIDN’T get my Chicago festival fix this year. At the time, I took on the mentality of the Chicago Cubs fan who says, “wait ‘til next year.”

But now, “next year” is going to come in such a scaled-back format that I have to wonder if the event will be worth going to. All I can say for sure is that the summer festivals – while they lasted – were one of the perks of being a Chicagoan.

EDITOR’S NOTES: The Chicago Sun-Times newspaper gets credit for rooting out this story (http://www.suntimes.com/news/metro/1244693,blues-fest-jazz-fest-reduced-to-three-days-102608.article) of how the music festivals are going to be scaled back in future years.

The Jazz Institute of Chicago compiled this list of all the musical acts to perform at the (http://jazzinchicago.org/files/chicagojazzfestival1979-2008.pdf) Chicago Jazz Festival back to its creation in 1979.

Somebody needs to update the Chicago city website, which says the Blues Festival in 2009 will take place from June 11-14 (http://www.cityofchicago.org/city/webportal/portalEntityHomeAction.do?BV_SessionID=@@@@1996861193.1225208683@@@@&BV_EngineID=cccdadefiellkfecefecelldffhdfhm.0&entityName=Blues+Festival&entityNameEnumValue=165).
Posted by Gregory Tejeda at 12:01 AM