It was with a bit of joy that I woke up Tuesday, did a quick search of the Internet to see what was happening in the w 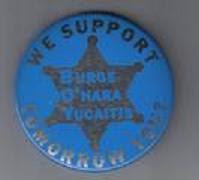 orld, and stumbled across the reports that just a few hours earlier, Jon Burge was arrested at his home in the suburbs of Tampa, Fla.

So much for Burge, a retired Chicago police officer, being able to enjoy the World Series in his adopted home town in peace.

BURGE IS ONE of those names that comes up perennially in Chicago news reports, and is one that many people may vaguely recognize – even if they’re not sure off the top of their heads who he is or why we should care about him.

For the Burge story has been around for so long that the specifics of his case are lost upon most people. Too many just hear the name Burge and apply one of two labels to him – “corrupt cop” or “victim.”

true. I have heard some people complain that Burge is merely being picked on by people who want to “coddle” criminal elements.

Now for those who don’t remember, Burge was a Chicago police officer in various capacities and ranks from 1970 to 1993 – when he was officially fired from his job. By that point, he had been on leave and had unofficially retired to Florida, where he continues to live to this day.

WHAT DRAWS THE attention of activists is Burge’s time when he was assigned to the Chicago Police area Two, whose stationhouse is located in the Pullman neighborhood and which encompasses all the police districts on the city’s Far South Side.

Activists who take an interest in police brutality and torture argue that Burge was a master of both genres. They claim his interrogation techniques cross the line between pressure to get someone to talk, and outright abuse.

Until Monday, there were never any criminal charges against Burge. But earlier this year, the City Council and Mayor Richard M. Daley approved a $20 million payment to settle a lawsuit brought by four people who claim Burge abused them while they were in police custody some two decades ago.

Now as often happens, the criminal charges now pending against Burge are not for the actual physical force (I don’t doubt those suspects were hit, what is at stake is whether the force crossed the line into torture).

THE TWO CHARGES of obstruction of justice and one charge of perjury relate to court proceedings in 2003 when Burge provided information about the decades-old physical force. Federal prosecutors say Burge did not tell the truth (he says he never tortured anybody). So they want to turn him into a convicted liar.

That is what activists with an interest in police brutality are going to have to settle for. A special report put together by Cook County officials two years ago determined that while some criminal suspects may have suffered torture back when Burge ran the detective bureau in Pullman, the statute of limitations had run out.

The end result was that the now-60-year-old Burge was required to appear before a federal judge in Tampa on Tuesday, where bond was set at $250,000 (he put up his house). He is scheduled to appear in U.S. District Court in Chicago on Monday, although the question is whether he will be allowed some sense of dignity in remaining free or whether bond will be revoked and he will get to live at the Metropolitan Correctional Center, looking out at the streets of downtown Chicago through one of those slits in the side of the building that pass for windows.

I can already hear the arguments from people who always want to give the police the benefit of the doubt in such cases (even though I think that police ought to be held to a higher standard to ensure they don’t abuse the great authority entrusted to them by working in law enforcement).

THESE WERE CRIMINALS who needed to have some force used (this is the real world, after all). Not only that, these are old cases and who’s to say how well anyone remembers the details. Besides, is it really fair to prosecute Burge now, all these decades later?

But U.S. Attorney Patrick Fitzgerald of Chicago is applying the same higher standards to police that he has applied to Chicago political people in recent years.

So now, the same federal prosecutor who took down former Gov. George Ryan for acts that some consider to be “just the way Illinois politics operates” is going after Burge for behavior that some might say is “just the way Chicago police operate.”

NOW, WHILE I concede the fact that police have a legal authority to use some physical force (we wouldn’t arm them with pistols and nightsticks if we didn’t expect them to be used every now and then), the stories told about Burge have always exceeded any sense of legal restraint.

Stories of inmates being given electric shocks to provide the “proper” (ie., self-incriminating) answers to interrogation questions are old. I heard them back when I was a full-time police reporter for the now-defunct City News Bureau of Chicago.

That was back in 1988, so none of this is new. And for what it’s worth, I used to make regular trips to that same Pullman Area stationhouse, and encounter many police officers who were quick to defend Burge’s behavior. I never actually met the man – he had been reassigned to a different unit by then, and always seemed to work different shifts than I did.

If anything, it is the age of these stories (the Chicago Reader stories that are considered some of the most definitive reporting on the Burge situation date back to 1989) that makes me glad something has finally happened.

IT IS TIRING to hear the Burge name turned into just a vague label that somehow relates to police brutality, but which most people don’t really know how. And to think that Burge will be able to tie into the groups of people who want to support police even though he may have abused his law enforcement power is kind of sickening.

Getting an indictment means we can start taking the steps toward something resembling a trial. That means eventually, the name “Burge” will quit being something of significant interest in news reports across the city.

Either way, it’s “Good Riddance” to Burge on behalf of the people of Chicago.

EDITOR’S NOTES: The Chicago Reader was one of the first publications to take seriously (http://www.chicagoreader.com/policetorture/900126/) the concept that something funky with the police was taking place on Chicago’s Far South Side.

The Chicago Sun-Times tried to score points by claiming to be the first Chicago newspaper (http://www.suntimes.com/news/metro/1233077,jon-burge-cop-torture-chicago-arrested-102108.article) in Tampa, Fla., for the story. The Tampa Tribune offers (http://www2.tbo.com/content/2008/oct/21/211133/feds-charge-ex-chicago-police-boss-obstruction/) their take on the Chicago story.

A University of Chicago-supported group offers this timeline of the Burge situation (http://humanrights.uchicago.edu/chicagotorture/timeline.shtml).
Posted by Gregory Tejeda at 12:01 AM