Dart’s deed gets him his “15 minutes” 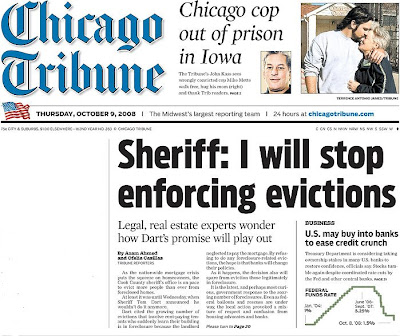 Getting the lead story in the Chicago Tribune was the least of Sheriff Tom Dart's news coverage for his refusal to enforce evictions in apartment foreclosure cases.

I might have been persuaded to think that Cook County Sheriff Tom Dart was acting irrationally with his decision to be selective about which evictions his office will enforce – that is until I read that the Illinois Bankers Association called Dart’s actions the equivalent of “vigilantism.”

The association is upset that Dart made a public spectacle – one that has gained international attention for our county’s sheriff – out of his decision to refuse to evict people from apartment buildings where it turns out the building owner was in default on their mortgage.

DART IS TAKING the viewpoint that the people who live in the buildings are innocent victims who often paid their rent to landlords, only to find out that the landlords did not fulfill their financial obligations to the banks that held the mortgages on the apartment buildings.

He thinks that throwing people out of their residences for someone else’s improper act is a despicable act on his part, and Dart admits he would not be the least bit upset if his actions were to pressure political people in Illinois to make changes in the law to penalize the landlords – or at the very least protect the renters.

But in issuing their statement, the bankers’ association is making it clear that it is not concerned about changes in the law. It is taking the viewpoint that it is not for the sheriff to decide which evictions are proper.

“He is carrying out ‘vigilantism’ at the highest level of an elected official,” the association said in its statement. “This cannot be acceptable to anyone, regardless of their viewpoints.”

BUT IN TRYING to compare the acts of our county’s sheriff to those thugs who try to take the law into their own hands, it gives me the impression that the bankers association thinks police in general ought to be the thugs who enforce their policies – even if they come at the expense of the people.

That is a view of law enforcement that is so un-American as to be despicable.

So I have to give Dart some credit.

Following a failed attempt in 2002 to get elected as Illinois treasurer, Dart recovered by winning the countywide post of sheriff, which makes him the administrator for the office that provides law enforcement for the unincorporated portions of Cook County and also oversees the county jail at 26th Street.

TO DATE, DART’S most visible act as sheriff has been dealing with federal officials who are critical of the manner in which the jail is run (crowded conditions for more than 6,000 inmates).

But now, Dart is the guy who got worldwide attention for putting up the image of standing up for the people against greedy bankers who could care less about the public.

Personally, I woke up Thursday morning and turned on the television for a news jolt – only to see Dart being interviewed live on CNN about his decision, which was announced at a press conference in Chicago on Wednesday.

That was far from the biggest news outfit to cover Dart. He got picked up by all the major international news wires (whose stories will be seen in publications and on websites based around the globe).

A SEARCH OF Google News found stories turning up in, among other places, The Age of Australia, and ShortNews.com of Germany.

I’m not alone in thinking this. Reading through the commentary sections of various websites, Dart is getting comparison from some people to the sheriffs of the Depression era of the 1930s who would refuse to perform evictions of people who had fallen behind on their mortgages.

While some people think the “letter of the law” is more important than the “spirit of the law,” Dart has managed to boost his profile. I’d go so far as to say for one day this week, Dart was as well known a Chicago-area political figure as Democratic presidential hopeful Barack Obama.

I don’t expect him to maintain such a high profile. Within a week, he’ll be the Chicago-area sheriff whose name people can’t quite remember, and within a month people will just remember some cop from somewhere (Was it Chicago, or maybe St. Louis?) who did something related to evictions that they can’t quite remember what it was.

SUCH ARE THE realities of the ongoing news cycle. Stories continually fade away.

But considering that I have taken my share of potshots at Dart throughout the years in which I have observed him at work (I was a City News Bureau courts reporter back when he was an assistant state’s attorney at the courthouse in Markham, and also saw him up close when I wrote for United Press International and he served in the state Senate and Illinois House of Representatives), I felt the need to write this commentary giving him a little bit of praise.

It is an instance where a law enforcement official puts the needs of the public at the top of his pile of priorities. That deserves recognition.

EDITOR’S NOTES: Tom Dart offered up this commentary in defense of his actions (http://www.suntimes.com/news/otherviews/1211633,CST-NWS-evict09.article) in the Chicago Sun-Times.

These are two (http://www.reuters.com/article/topNews/idUSTRE4987TJ20081009) of the global perspectives (http://www.theage.com.au/world/sheriff-shuts-the-door-on-evictions-20081009-4xkh.html) on Dart’s actions with regard to evictions.

The Cook County sheriff’s office is willing to risk an injunction forcing it to take action (http://www.nytimes.com/2008/10/09/us/09chicago.html?ref=business) on evictions.
Posted by Gregory Tejeda at 12:01 AM