How long will it take to recover from the partisan rhetoric of Campaign ’08? 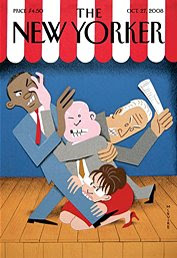 I couldn’t help but notice this weekend while bopping about the Chicago metropolitan area a car that was parked outside a supermarket.

The make of car was nothing special. It was the choice of bumper stickers and other ornamentation that made it stand out.

FROM THE CAR’S rear view mirror hung a medallion depicting the flag of Bulgaria. A sticker on the bumper also indicated ethnic pride emanating from the Eastern European nation. But the driver also had a miniature U.S. flag flying on his dashboard.

So if this was not a recent immigrant to this country, the car belonged to someone who still took pride in his ethnic roots.

But the other stickers plastered on the car are what truly caught my attention. There were four of them, and they were stuck on the rear, right passenger window of the car. One depicted a blue-tinted picture of Democratic presidential nominee Barack Obama with a red slash over his face.

Another gave us the recently popular slogan “NObama,” while a third told us “Vote America, not Obama.” A fourth, using pink-tinted lettering, told us “No socialism.”

AS IF THAT wasn’t enough, the suburban-based SouthtownStar newspaper published a story this weekend telling us of a Tinley Park high school’s mock presidential election. Among students at Andrew High School who bothered to vote, Obama won.

But Republican opponent John McCain had his supporters among the students, and the newspaper found one who is actually 18 (making him old enough to cast a ballot for real come Nov. 4) who said he did not support Obama in the mock election because, “I don’t like the idea of spreading the wealth.”

Admittedly, these are just two people out of the masses who plan to vote on Election Day (or have used new methods put in place to allow them to cast their votes a week or two early).

But it is obvious that these are two people who have been infected with the campaign rhetoric tossed about by McCain and his loyal supporters.

THIS IS ONE of the drawbacks for me in writing about political campaigns. As one who has covered elections in this state dating back to when Paul Simon tried running an “Illinois favorite son” campaign for president (and who remembers them going back to when Dan Walker walked the length of Illinois to draw attention to his dreams of being governor), I have heard enough campaign rhetoric to know it is all nonsense.

Candidates of all partisan political persuasions come up with standard themes and punchy lines that fit the theme – all designed to make their opponent sound like a simpleton.

On a certain level, the candidates know that what they are saying is absurd. It is why they can quickly apologize when a line is taken the wrong way (such as when GOP vice presidential hopeful Sarah Palin made a crack about certain parts of the country not being loyal to the U.S., or when Democratic partisans get “worked up” over Palin’s alleged $150,000 shopping spree for clothes to wear while campaigning).

They really didn’t mean it to begin with.

BUT TO MANY people in the electorate (particularly those with real lives who can’t devote every second of their existence to following campaign minutia), this kind of trash talk gets taken seriously. This time around, it seems to me that it is being taken particularly literally.

If anything, this is the influence that race stands to play in this particular campaign season. Potential voters may say they don’t care about a candidate’s racial background, but the fact that Obama is not like many of the Anglo majority means they are willing to believe the mean-spirited distortions that (to the McCain campaign) are just campaigning as usual.

Hence, we get newly minted voters who seriously believe that Obama is about taking the wealth from the masses to give to the poor. It’s actually about taking opportunities to create wealth and spreading them around to all, which is in many ways “The American Way.”

But the McCain campaign rhetoric stirs up a sense in young people who weren’t even alive during the “Cold War” a sense that they too can vote (if not fight) against “the Commies.”

AND IN THE case of the Bulgarian-American motorist, it plays off the fears he (or she, for all I know) has about his native land, getting him to believe that he must absorb the “rants of the right” – lest anyone think he is not truly devoted to this country and ought to have his citizenship revoked.

That strikes me as a sick, twisted ideal of what “The American Way” represents.

Of course, the rhetoric of the right that infects too many Republican campaigns these days seems to want to believe that Obama’s loyalty must be questionable, because he is the son of a man who was a Kenyan citizen and who returned to his native country after completing his education in the United States.

Would we be hearing similar rants if Obama were the son of a British citizen who returned to England after attending U.S. colleges? I doubt it.

BUT JUST WHEN I start to think that we are getting permanently buried under a pile of political dung, I see moments that make me think some of us are still rational.

One such moment came Saturday when I stopped off at a Borders bookstore to purchase a couple of magazines (“The New Yorker” and “Newsweek,” for those of you who care).

Right behind me in line waiting for the cashier was a woman with her young son (I would guess he was about 7). He started chanting, “Obama’s a loser,” much to the dismay of his mother, who was wearing not only a sticker on her jacket indicating she had voted early, she had her campaign button with the “Obama/Biden” logo prominently displayed.

After she gave her son a nasty look, he quickly changed his chant to, “McCain’s a loser.”

NOW ONE COULD argue that the kid was correct at least once (perhaps both times if Chad Koppie pulls off a miracle come Nov. 4.).

But the mother quickly lectured her son, saying, “you don’t know who those people are. It’s not right to say bad things about people when you don’t know anything about them.”

Perhaps we ought to have that mother sit down with the candidates to lecture them. A slightly more civil discourse would be beneficial to all of us.

EDITOR’S NOTES: Real-life socialists think it is absurd that anyone could believe that someone (http://www.chicagotribune.com/news/chi-obama-chicago-socialist,0,4048540.story) so willing to work within the mainstream as Barack Obama could be suspected of being a “socialist” himself.

Chad Koppie of Gilberts, Ill., a retired airline pilot who likes to run campaigns for elective office to tout his conservative ideals, got more support for his fringe presidential (http://www.southtownstar.com/neighborhoodstar/tinleypark/1241683,102508mock.article) campaign than did Ralph Nader, in a mock election held at suburban Evergreen Park High School.

Even when trying to denounce the constant use of labels such as “socialist” to attack Obama (http://www.intellectualconservative.com/2008/10/24/orwell-and-overheated-political-rhetoric/), his opponents still find ways to criticize him.
Posted by Gregory Tejeda at 12:01 AM

Great post, Gregory. One of my tweeters said he was in a Walmart last week when a woman told him that Obama was a Muslim. "Maybe you'll get a Burka for Christmas," he replied. The woman didn't find that funny.