I’m looking at a recent copy of the Sporting News, one which featur 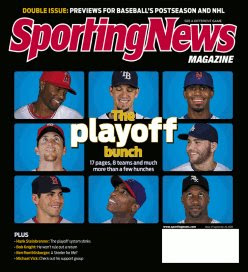 es a preview of the Major League Baseball playoffs before it was known for sure who would qualify.

Their cover was meant to be a parody of the opening credits of the 1970s “Brady Bunch” sitcom, with those photographs set up in a tic-tac-toe and everybody looks at each other. Only instead of Maureen McCormick and her ilk, we got to see ballplayers from the eight teams the magazine thought would be part of “The Playoff Bunch.”

EITHER THE SPORTING News was incredibly intelligent, or stupendously lucky. They picked seven of the eight playoff-bound teams correctly (the White Sox are represented by a headshot of slugging outfielder Jermaine Dye).

If only they had dumped the picture of Jose Reyes of the New York Mets for a Milwaukee Brewer (perhaps C.C. Sabathia?), they would have been perfect.

So now, we’re beginning the playoff season for 2008. For the first time ever, both Chicago ball clubs qualified. This is a pet peeve of mine, but it irritates me when news anchor types say this is the first time in 102 years that the Sox and Cubs made the postseason in the same year.

BUT THAT WAS under a different structure when teams had to win their league championship in order to qualify for “the postseason.” Now, a team only has to have one of the better records in the league to make the playoffs. Winning the league championship comes after winning two rounds of playoffs – with the third round being the World Series itself.

What is accurate to say is that this is the first time ever both Chicago ball clubs qualified for the playoffs in the same year, since playoffs have only been held in baseball since 1969.

Whether they both can manage to win two rounds of playoffs and meet against each other in the World Series for only the second time ever is something I don’t even want to speculate about.

Too much of post-season baseball is a coin flip. Who will get “hot” over the next three weeks? Does the fact that the White Sox played three “win or die” games in a row mean they have kicked off a momentum that could carry them, or did they expend their energy just to make it to the playoffs?

DOES THE FACT that the Cubs finished the regular season with the best won-lost record in the National League mean they will remain dominant? Or does the fact that they have basically been in idle for a week-and-a-half mean that they have lost momentum, and will get knocked out in the first round by Manny Ramirez and the Los Angeles Dodgers?

I’m rooting for the concept of an all-Chicago World Series, just because outside of New York City, it is a rare event. We have only had one in just over a century of competing American and National leagues, while St. Louis only had one. Philadelphia and Boston never had one (although the latter city came so close in 1948), nor has Los Angeles – although in theory they could get their way this year, as both the Dodgers and Angels of suburban Anaheim also qualified for the playoffs and somehow, I think L.A. has a better chance than Chicago to get a City Series in '08.

I’ll likely follow my usual playoff baseball routine in following the activity of the American League, and will settle for learning who wins the National League pennant once the World Series starts.

THAT MEANS I’LL root in the World Series for whoever wins the American League championship.

So-called civic pride wouldn’t get me to root for the Cubs any more than I would expect any of those blowhards who showed up at Daley Plaza on Tuesday to back the Sox should they make it to a World Series against L.A., Philadelphia or Milwaukee (wouldn’t the idea of a Sox/Brewers World Series irritate Cubs fans?).

So I’ll be following baseball in coming weeks, primarily as a relief from the activity of the presidential campaigns in October, the whacked out attempts in the District of Columbia to resolve the financial crisis and the constant speculation about whether Gov. Rod Blagojevich is on the verge of being indicted by “the feds.”

I’ll leave you with one final thought, and it relates to Blagojevich. He was one of the people who participated in the official MLB-sanctioned fans rally for the Cubs in the shadow of the Picasso (which was clad in a silly blue cap for the occasion). 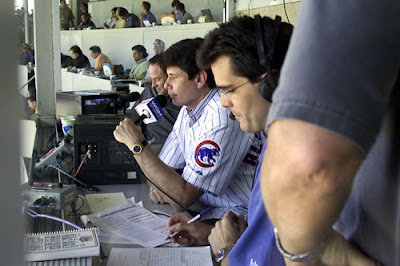 Will being a Chicago Cubs fan help boost Gov. Rod Blagojevich's popularity ratings at a time when some are speculating he will be indicted later this year? Photograph provided by State of Illinois.

OUR GOVERNOR, WHO has never made a secret of being a Cubs fan (just like Mayor Richard M. Daley could be seen sitting in a front-row seat near the dugout at Tuesday night’s tie-breaker game against the Twins) made a point of saying he thinks former third baseman Ron Santo belongs in the Hall of Fame.

Perhaps he thinks that praising the memory of the one-time frozen pizza pitchman will gain him the love of Cubs fans across the state.

Who’s kidding whom? Blagojevich contempt has reached such high levels in Illinois that not even Cub fandom could save him.

EDITOR'S NOTE: For a team to lose its top player and potential Hall of Fame pitcher and STILL manage to come within 1 game of finishing the regular season in first place is a remarkable (http://www.startribune.com/sports/twins/29983084.html?elr=KArksi8cyaiUqCP:iUiacyKUU) achievement, and I suspect we'll be hearing more from the Minnesota Twins in the next few seasons than we will from, say, the Detroit Tigers.
Posted by Gregory Tejeda at 12:00 AM