Where have all the Republicans gone? 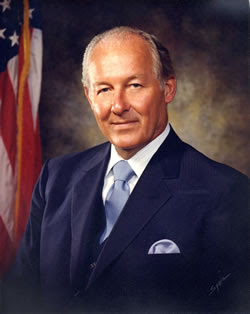 pt to give his GOP colleagues a lecture about the need to build a strong organization that can turn out the vote on Election Day.

Michel, who was among the Illinois delegation at the Republican convention in St. Paul, Minn., told his colleagues on Thursday that their failure to organize is the reason why they both of Illinois’ members of the U.S. senate are Democrats, and why all six state constitutional officers hail from Chicago.

THE CHICAGO SUN-Times reported that Michel called his political party “weak” and said it has failed to show support for the Republican candidates in recent years. “All the polling ahead of time doesn’t mean two hoots unless you have the ground forces to get the vote on Election Day,” he said.

“We just haven’t had that the last several years,” said Michel. “No question. You just got to face up to reality. Let’s not kid ourselves.”

On the surface, Michel is right. But I’m not convinced the GOP of today is going to be willing to listen to the one-time leader of Republicans in the House of Representatives. Michel himself has a mixed legacy.

There are those who remember him as a long-time member of the Washington scene who rose from Peoria to being a GOP leader. There are others who credit him for being willing to work as a middle man between former President Ronald Reagan and the Democrats who ran Congress back then, resulting in some of Reagan’s legislative accomplishments.

YET TO SOME of the most hard-core partisans of the Republican Party, Michel was the problem. He was of an old school that was willing to cooperate with opposition Democrats, ostensibly to get things done. But they say that attitude drove the Republican Party into a perpetual minority status.

They note that Republicans never controlled the House of Representatives during any of the time that Michel served there (1957-1995). But when Michel stepped down from his leadership post to retire, the Republicans immediately gained control of the House – which they held for 12 years.

Michel was replaced by Newt Gingrich of Georgia – who immediately became the House speaker who used his legislative power to push a conservative GOP agenda through Congress. The “Contract with America” was a lot of the partisan measures that Democrat-controlled Congresses had been rejecting for years, which suddenly got approval from a legislative body that was willing to play partisan hardball.

So I have to wonder how many of the GOP faithful of this state are going to take Michel’s comments as the opinion of an old guy who is living in the past, which wasn’t all that great to begin with.

THAT WAS THE sense I got learning of the reaction of Illinois Senate Minority Leader Frank Watson, D-Greenville, who told the Sun-Times, “I think he’s talking about the past. He certainly can’t be talking about today.”

If they do take that attitude, it will be a shame because I remember Michel being one of the people who gained respect from those of all political parties. I can remember the early 1990s when it was generally considered that Illinois had an influential congressional delegation because we had the minority leader on the Republican side and the Ways and Means chairman on the Democrats.

To some people today, the names “Bob Michel” and “Dan Rostenkowski” are regarded as political dinosaurs who should be ignored.

Yet Michel in Minnesota stressed the need for “stirring things up” back home, trying to get people excited both about this election cycle and the upcoming statewide elections of 2010 – when Rod Blagojevich will take a shot at getting a third term as governor, and all the other state constitutional offices will be up for grabs.

CONSIDERING THAT STATE Attorney General Lisa Madigan, Comptroller Dan Hynes and Treasurer Alexi Gianoulis are among the names that have been touted as prospects to move up to higher office, there is a chance (good for the GOP, not so good for the Dems) that some of the state offices will NOT have incumbents seeking re-election.

If ever there was a chance for the Republican Party to try to make a move back into having some influence in Illinois, this is it.

But for the Republican Party to overcome their problems, they are going to have to take a realistic look at why they fell from so high in 1995-96 (when they held every state constitutional office) to now (where they have nothing).

Too many Republicans want to believe the source of their problems is George Ryan, the former governor who currently is serving a prison term at the minimum-security federal work camp that is part of the maximum-security Terre Haute Correctional Center.

HE WAS CONVICTED of various criminal charges related to government corruption during his time (1991-1999) as Illinois secretary of state, and too many Republican officials like to think George single-handedly took them down with his behavior.

Actually, what has hurt the Republican Party in this state more than anything else is the political partisanship that has arisen nationwide between urban and rural America, with the latter group falling in line with the GOP.

Back in the 1990s, the Illinois Republican Party won statewide elections with its combination of strong organizations in the suburban Chicago collar counties, combined with the masses of voters in rural Illinois who saw the GOP as the mechanism that prevented Chicago from taking over everything in Illinois.

But those two factions also fought among themselves, with the rural Illinois Republican faction ultimately gaining control of the party – as many newcomers to suburban areas in the past decade began seeing they had more in common with Democratic Chicago than Republican rural Illinois.

IT ALLOWED DEMOCRATS to start cutting into the one-time power bases the GOP had in places like DuPage and Lake counties, and left a rural-dominated GOP in a weak state – so much so that when George Ryan’s situation came down, the party was unable to cope with it.

Be honest. If Mayor Daley were to be indicted for something, the Democratic organization in this state would not get hung up by it in the way the GOP can’t seem to get past Ryan.

In Illinois, the Republicans are going to have to start seeking to expand their influence in the urbanized areas if they want to be able to generate the types of votes that could win them the major elections.

That is why I doubt the vice presidential nomination of Sarah Palin will have much of an effect locally. She draws in exactly the type of person the GOP already has, while scaring off the kind of potential voter the party needs in order to succeed.

IF THAT SOUNDS like I think the political people of today ought to listen to some of the old-timers like Michel when they speak, then so be it.

After all, no matter how much people complain that Michel’s way of doing things is “the past,” keep in mind that back when he was around, Illinois Republicans had influence. Now, they are the people who were banished to the back of the auditorium on the day that John McCain accepted the GOP’s presidential nomination.

EDITOR’S NOTES: Bob Michel is trying to push his younger Republican colleagues from (http://www.suntimes.com/news/elections/rnc/1145487,illgop090408.article) Illinois so they can someday regain a share of political leadership in this state.

Michel was among the Republicans who initially was skeptical of Sarah Palin as a vice presidential nominee (http://voanews.com/english/2008-09-01-voa48.cfm), but has been impressed with the amount of enthusiasm she creates among the conservative partisans who comprise the bulk of the GOP.

Michel has been a delegate to Republican presidential conventions since the year the GOP took a chance (http://bioguide.congress.gov/scripts/biodisplay.pl?index=M000692) on Barry Goldwater. He was permanent chairman of the conventions held in 1984, 1988 and 1992.
Posted by Gregory Tejeda at 12:01 AM

I would like to be the 1st to say OUCH!