Cubs a flop if they don’t win NL pennant, & Sox fans would love to flop them 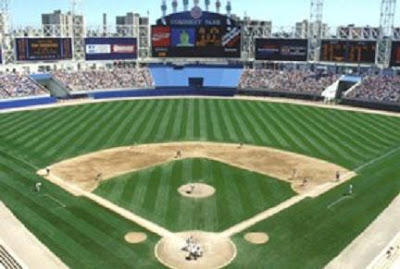 What are the odds the Detroit Tigers will play here Monday? Or the Minnesota Twins on Tuesday, or Tampa Bay Rays next weekend? Photograph provided by State of Illinois.

To listen to many Chicago Cubs fans, the gods of baseball have been excessively cruel to them. How dare anyone not realize that their team is a fun-loving batch that deserves multiple championships?

They certainly don’t deserve to be the team that has managed to go a century without winning a World Series title, and according to the title of one written history of the ball club, has overcome odds of “1 Million-to-One” by not even winning a National League championship since 1945.

IN SHORT, CUBS fans are becoming insufferable in their belief that they are somehow “owed” a championship this year, since their favorite ball club has managed to win its division and likely will finish the season Sunday with the best won-loss record in the National League.

My personal favorite snit-fit is the two fans who are upset that an elderly man who they usually share a Cubs’ ticket package with during the regular season decided he would keep the playoffs and World Series tickets he was eligible to buy.

Their whining went so far as to result in a lawsuit in Cook County Circuit Court, claiming the 84-year-old man was cruelly depriving them of their “right” to see a baseball game.

Of course, they managed to resolve their dispute Friday by deciding to share the tickets, and alternate which games they went to.

THERE ALSO ARE the “fans” who are upset that the city wants to impose restrictions on alcohol sales in the taverns surrounding Wrigley Field during the ballgames. For every “fan” who actually gets a ticket to enter Wrigley Field during a playoff game, there will be three or four more who decide to hang out in the Lake View neighborhood bars within a block or two of the stadium.

They will then claim that because they were drinking while hearing the roars of the crowd emanating from Wrigley Field, that they were “there” when whatever winds up happening actually happened.

It probably shows that I’m not a fan of the concept of the Cubs being in the baseball playoffs this year. Part of it is because I have never had any use for the Cubs, or anything in the National League (although this year, I would get a kick out of seeing the Los Angeles Dodgers make it to the World Series in the season after Joe Torre was released as manager by the New York Yankees – who fell short of making the playoffs in 2008).

If the Los Angeles Angels (who likely will finish the season with the best record in the American League) manage to win the two rounds of playoffs, that could set the scene for a “City Series,” although I suppose third-rate baseball pundits will try to call it the “Freeway Series” or something equally lame in a California-ish style.

OF COURSE, THERE’S always the chance that the White Sox will manage to eck out a division title – overcoming their awful play in Minneapolis this weekend. The first City Series in Chicago in 102 years would be an incredibly tense event.

White Sox fans (and anyone who carries the spirit of Chicago’s South Side in them) would view such an event as a life-and-death war. I believe Mayor Richard M. Daley (whose family is long-time White Sox season ticket holders, on account of the fact they grew up about a six-block walk from the old Comiskey Park) when he says a City Series in Chicago would create an ugly mood in the city.

A good part of the reason that such an event would be ugly is that Cubs fans would resent having the White Sox in what they would see as “their” World Series.

The fact is that for a Chicago baseball fan, rooting for one’s ball club includes having a desire to see one’s team come out on top of the other team, even though former Chicago sports broadcaster Mike North recently derided such thought as being “the way 12 year olds think.”

For Cubs fans, part of the joy of the 2008 season is that their team won a division title and could win a league championship and go to the World Series, and could even win it, while the White Sox fall short.

If it turns out that on Tuesday of next week, 2008 goes into the local history books as the second time that both the White Sox and Cubs managed to finish the regular season in first place, it means they’d have to share some of the glory.

SOME WHITE SOX fans I know would be willing to “settle” for knowing that the baseball record books would record both teams as having accomplished something in 2008, and that the Cubs didn’t get all the glory. Meanwhile, Cubs fans would see it as some sort of plot to steal their glory.

Some I know resent the fact that the White Sox actually managed to win an American League pennant and World Series title in 2005. In their minds, the White Sox weren’t supposed to win anything until AFTER Cubs teams took some sort of title.

Of course, there is the White Sox mentality that will enjoy the thought of the Cubs fizzling out in the first round of the playoffs, just as Cubs fans will take pleasure if the White Sox are unable to get into the playoffs.

And if both Sox (Chicago and Boston) manage to get into the American League playoffs, then White Sox fans will take a certain amount of pleasure in knowing that they have robbed Cubs fans of some of the satisfaction they desired from this 2008 season.

SO EVEN THOUGH this season is not yet over, and the playoffs and World Series will stretch the U.S. baseball season into the days surrounding Halloween, I will venture this observation.

I know that Cubs fans will claim they had the better ball club in the first decade of the 21st century – citing the two consecutive division-winning teams they had in 2007 and 2008.

But unless the Cubs manage to win both rounds of the National League playoffs, thereby making late singer Steve Goodman’s song lyric about the last Cubs’ championship coming in, “the year we dropped the bomb on Japan” an obsolete thought, then the Cubs will have fallen short.

After all, White Sox fans don’t celebrate the memory of 2000, when our favorite team had the best regular season record in the American League, but lost in the playoffs. Nor do we go on about the fact that our team usually finishes with winning records (2007 was an aberration).

UNLESS 2008 BECOMES the year the Cubs beat out three other playoff teams to win the pennant and go to the World Series, the year will be a failure.

And even if the Cubs do manage to bring the World Series to the North Side, our local history will always record that it was the White Sox who were the first Chicago baseball team to win a championship of any kind during the lifespan of any Chicago resident currently under the age of 50.

I suppose we could allow the Cubs fans to follow in our footsteps for now. But next year, …

EDITOR’S NOTES: “A Dying Cub’s Fan’s Last Request” is one of the few things about the Chicago Cubs (http://www.baseball-almanac.com/poetry/po_cubs.shtml) that doesn’t annoy me.

“Sports Illustrated” is convinced that 2008 is the year that Cubs fans get to be insufferable boobs (http://www.baseball-almanac.com/poetry/po_cubs.shtml) in their World Series celebration. Does this mean the Cubs’ chances of actually winning are doomed?

What combination of White Sox victories and Minnesota Twins defeats this weekend will (http://www.chicagotribune.com/sports/baseball/whitesox/chi-080926-white-sox-twins-chart,0,2994230.htmlstory) keep alive the chance of the second-ever World Series played (http://mlb.mlb.com/news/article.jsp?ymd=20080923&content_id=3532201&vkey=news_mlb&fext=.jsp&c_id=mlb) entirely in Chicago?
Posted by Gregory Tejeda at 12:01 AM