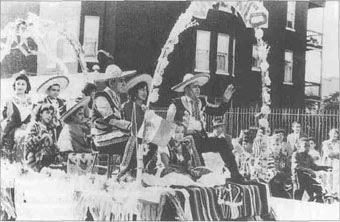 Residents of the South Chicago neighborhood down in one-time steel mill country have celebrated Mexico Independence Day with a parade for 69 years, including this celebration from 1957. Photograph provided by Southeast Chicago Historical Society.
It’s Independence Day in Mexico on Tuesday. Yet for those people in Chicago with an interest in celebrating the holiday, it is already over.

The official citywide celebration on Columbus Drive took place 10 days ago, while the Mexican-oriented neighborhoods of the city had local celebrations this past weekend. From Pilsen to Little Village to South Chicago, one could literally celebrate the holiday over and over and over.

SO WHAT IS the significance of the actual holiday, which is a factor for the roughly one in six Chicagoans who are of Mexican ethnic descent? It’s less about allegiance to a past homeland, and a celebration of cultural pride.

Which makes it about as significant as the St. Patrick’s Day parades or the New Year celebration conducted each year in Chinatown. One should read The South Chicagoan (http://southchicagoan.blogspot.com/) for more thoughts on this issue.