What makes a good relief pitcher? It’s not necessarily having the most saves

I always thought it was appropriate, somehow, that the record for the most victories saved by a pitcher in a sin 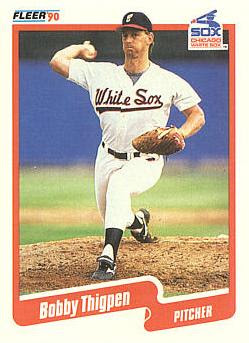 gle season was held for nearly two decades by a ballplayer who otherwise would have been forgotten.

To me, it is the ultimate evidence of the stupid way in which baseball’s “save” statistic has evolved. As far as I’m concerned, it does not tell us who the best relief pitcher was, or even who had the best overall single season pitching in relief?

SO IT WAS perfect justice in my mind that Bobby Thigpen, the pitcher for the Chicago White Sox, managed in 1990 managed to set the standard for saves. While pitching for a third-place ball club that was only notable because it broke a streak of four straight seasons of White Sox teams with losing records, Thigpen “saved” 57 games.

That figure is getting public attention because Francisco Rodriguez of the Los Angeles Angels on Thursday managed to tie Thigpen’s mark, and could break it any time in the next three weeks. There’s also the irony of Rodriguez getting the 203rd “save” of his career on Wednesday of this week, passing Thigpen’s career mark of 202.

So Rodriguez, the guy who has become the hired gun who finishes off ballgames for an Angels’ team that could easily finish this season with the best record in baseball, gets to do a double-pass of the guy who was one of the few White Sox players to hold a significant Major League record.

Part of the reason I can’t get too worked up about this is that I understand (from reading various stories written in recent days) that Thigpen himself has a fairly solid handle on the significance of being knocked out of the record book. He realizes that life goes on, and it doesn’t really diminish his stint as a ballplayer.

BUT THERE’S ALSO the fact that “saves” are such a stupid statistic – their meaning is so overrated. I never thought of Thigpen as the best relief pitcher professional baseball in this country ever saw, or even the best the White Sox ever had.

So the idea that Thigpen no longer gets the record for the primary statistic for relief pitchers doesn’t seem like some cosmic injustice.

Now for those of you who have read this far, but are clueless as to arcane baseball statistics, the concept behind a save is legitimate. Concocted back in the 1950s by the recently-deceased Jerome Holtzman while writing for the Chicago Sun-Times (and later the Tribune), the idea is to credit a pitcher with a “save” if he comes in toward the end of a ballgame and prevents the other team from taking a lead.

In short, he doesn’t blow it.

THE PROBLEM WITH the “save” is that in recent years, managers have developed such a stilted way of thinking of relief pitchers that the guys who get the “saves” are the ones who literally have the game situation created for them in such a way that they would be incompetent if the didn’t get the save.

It is a holdover of the days in the early 1990s when the Oakland Athletics resurrected pitcher Dennis Eckersley’s career by converting him from a pitcher who started games every five days to one who could pitch to a few hitters every day in relief.

There could be cases when Athletics management would merely use Eckersley to get the final out of the game. That allowed him to rack up saves, and statistics, that some people think make him a wonderful relief pitcher – one of the first relievers to actually get into the Baseball Hall of Fame in Cooperstown, N.Y.

To me, the concept of a “save” had more significance in the old days when a relief pitcher would be expected to pitch an inning or two (sometimes as many as three) at a time, and would have to work through various situations in order to get credit for finishing up a game without blowing a lead.

A PART OF me always considered Thigpen’s achievement to be a fluke.

While pitching for a team that did not seriously challenge Eckersley’s Athletics team for the American League championship in 1990, Thigpen was used only in certain situations so that he got a “save” just about every time he pitched. In short, he earned his pay that year.

Now that is still impressive, because it means he pretty much went through an entire season without having a bad ballgame. Over the course of a 162-game regular season, every player (even the biggest stars) has bad games.

For a relief pitcher, a bad ballgame hurts because they face so few hitters. One mistake balloons an Earned Run Average to the point where it takes weeks of perfect pitching appearances in order to reduce it back to a level that doesn’t look abhorrent.

IN FACT, THAT is what makes relief pitching more about having the right frame of mind – rather than physical skills. It is about being able to handle the stress of knowing one will always pitch only in situations where a game can be lost with a single mistake. It is about having to cope with the knowledge that one must always be perfect – unlike a batter who is thought of as having a good season if his batting average is somewhere in the area of 30 percent.

Many ballplayers can’t cope with that for more than a short stretch of time. It is why someone like Thigpen is all too common in baseball. He goes through a stretch of a year or two where he appears to be dominant – then fizzles out.

In my mind, the best relief pitchers to play for the White Sox were Hall of Fame members Hoyt Wilhelm (who had some of his best years pitching for the light-hitting clubs on the South Side back in the 1960s) and Rich Gossage (who might be remembered mostly for his years with the New York Yankees, but was actually a product of the White Sox minor league system and established himself as a potentially top pitcher while playing ball in Chicago).

Heck, in my mind, even current White Sox relief pitcher Bobby Jenks (28 saves this season, and 115 for his career thus far) has established himself as a more overwhelming relief pitcher than Thigpen was – even though Jenks’ best season for saves (41, in 2006) falls far short of Thigpen’s best year, and there is some evidence that Jenks’ best years are behind him.

SO WHAT SHOULD we think of Rodriguez, or even Thigpen?

Perhaps Bobby’s achievement would have meant more if the White Sox had been in serious contention for a league championship in 1990. Instead, they won more games than people expected them too, but they were three years away from being able to win a division title.

That is why I’m sure many baseball fans will be pleased to have Rodriguez knock Thigpen out of the record book. He is pitching for a ball club that has a serious shot at winning a league championship and going to a World Series (unless the White Sox fulfill the dreams of serious Chicago baseball fans and beat the Angels in the playoffs).

That will make the saves record seem more legitimate and less like a statistical freak show, the way the Thigpen record always seemed to be.

IN THE MINDS of many White Sox fans, the 1990 season was more important because it was the final year the team played in Comiskey Park, in the shadow of the colossus that rose from the ground just south of the ballpark to become the structure we now know as U.S. Cellular Field.

You know, the baseball park that actually has a World Series championship pennant flying over it?

EDITOR’S NOTES: Francisco Rodriguez tied the statistical record that allows Angels fans (http://sports.yahoo.com/mlb/news?slug=txangelsrodriguez&prov=st&type=lgns) to put in an argument that he was the best relief pitcher ever. I’d argue that “best reliever ever” is a fight (http://chicagoargus.blogspot.com/2008/01/gossage-sutter-departures-so-typical-of.html) between one-time Chicago pitchers Rich Gossage and Bruce Sutter.

For the statistical geeks among us, here is an analysis (http://www.baseball-almanac.com/feats/feats26.shtml) of the best season Bobby Thigpen ever had in his eight years as a major league ballplayer.

Thigpen remains in baseball, having just finished his second season managing a White Sox (http://www.chicagotribune.com/sports/cs-24-verdi-thigpen-newaug24,0,5862802.column) minor league affiliate in Bristol, Va., in the Appalachian League. A more relevant statistic for Thigpen these days? His Bristol Sox team finished the 2008 season with a 34-30 record, and a third-place finish in their division.
Posted by Gregory Tejeda at 12:01 AM