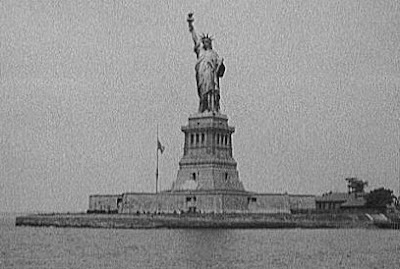 Will Lady Liberty's little sister enjoy being a Hoosier? Or will she become the butt of local humor? Photograph provided by Library of Congress collection.

What will the Leaning Tower of Pisa and the Statue of Liberty soon have in common? Beginning next year, both of the landmarks with European roots will have miniature knockoffs in existence in the Chicago area.

ANYBODY WHO IS in the know about Chicago and the 263 surrounding municipalities that comprise the Chicago metropolitan area will tell you that you don’t have to endure the cost of a European vacation to get a feel for the Leaning Tower.

You can make the drive up to north suburban Niles and check out the water tower dating back to 1932 that was designed to look like a half-size replica of the centuries old structure in Italy.

It has a less-severe tilt than the real thing. But it has duplicated the general appearance of the Pisa structure in the suburban village of 28,848 people.

It’s cheesy, but good for a kick. Seeing it is like being able to say you saw the world’s biggest ball of twine (which both Cawker City, Kan., and Darwin, Minn., claim to have). In the near future, a similar experience will exist to the southeast of the city proper.

HAMMOND, IND. (PARTS of which are located on the other side of Wolf Lake from the Hegwisch neighborhood) is going to be the home of a miniature copy of the Statue of Liberty.

This particular version of Lady Liberty is 20 feet shorter than her 150-foot-tall older sister on Ellis Island in New York City. Officials plan to erect her on Boy Scout Island, the patch of land out in the middle of the lake that separates the far southeast corner of Chicago from Indiana.

She was originally built for the YTB International trade show held this year in St. Louis. Rather than relegate her to the trash, they donated her to the city of 77,175 that can’t make up its mind whether it is part of Chicago or Indiana. While it is both, there are times when it doesn’t really seem to fit in with either.

The statue was built by Griffith, Ind.-based BerylMartin, so officials felt it only appropriate that it be returned to the Hoosier State in some form. Hammond officials are now studying how much it will cost them to build and maintain a proper base in the middle of Wolf Lake.

THEY SAY THEY hope to have her erected in Indiana come spring of 2009.

Now to me, the notion of a Statue of Liberty clone is silly, bordering on tacky and threatening to trivialize the ideals of freedom that we U.S. citizens like to boast our home country represents.

But when one considers that the general ambiance of the Hegewisch and nearby East Side neighborhoods is one of rust from the nearby steel mills that no longer produce steel (or employ the local residents), perhaps it will be good for them to have something a little ridiculous in their midst.

And if it draws some attention to a part of Chicago that many city residents don’t seem to realize even exists, then I suppose it would not be the most ridiculous thing in existence. It would not even be the most absurd piece of public art in the Chicago area (the black and white blob outside the Thompson Center state government building gets my vote for that category).

I ALSO GET a kick out of the irony of Lady Liberty’s sister being a gift with connections to St. Louis, a city named for one-time French King Louis IX. After all, the original Lady Liberty was a gift from France to the United States.

There’s just one aspect of this whole situation that bewilders me. There is bound to be some debate over just how to position the statue.

Reports in the Indiana-based press seem to indicate that the statue would be positioned so that people driving or walking along Calumet Avenue in Hammond would see Lady Liberty facing them.

That would mean she would be placed in a way that she is turning her back on Chicago.

MOTORISTS DRIVING ON the Chicago Skyway out of the city will get to see the back of the statue’s head. Those of us on the ground will get a perfect view of Lady Liberty’s posterior.

The Times of Northwest Indiana newspaper of Munster, Ind., actually went so far as to editorialize (seriously) that officials should work to avoid such a positioning situation, although it does not seem to have a clue as to what alternatives exist.

But the Chicago snob in me actually thinks such a positioning would be perfect.

In the same way that newcomers to New York got Lady Liberty with her torch of enlightenment as their first sight of life in the United States, people passing through Indiana who are approaching Chicago and Illinois will get to see a similar site as they finally reach the point where they cross the state line – going from the Land of the Hoosiers to a Taste of Civilization.

EDITOR’S NOTES: What would you rather see at the entrance to Illinois – a replica of the Statue of Liberty (http://www.stltoday.com/stltoday/business/stories.nsf/yourmoney/story/D198EBC73001348B862574B50006C1DF?OpenDocument), or yet another sign reading “Welcome to Illinois, Rod Blagojevich, Governor”).

It was appropriate that a Ray Charles impersonator sang “America the Beautiful” at ceremonies (http://www.upi.com/Odd_News/2008/08/02/Liberty_replica_to_get_public_sendoff/UPI-28081217673845/) marking the transport of the Statue of Liberty replica to St. Louis.

With all the pollution that has been dumped into Wolf Lake and the Calumet Region throughout the decades, it is almost laughable (http://www.post-trib.com/news/lake/1102825,lcliberty.article) to think that a Statue of Liberty replica (even one that is 26 tons of Styrofoam) is going to suddenly defile the area.
Posted by Gregory Tejeda at 12:01 AM