EXTRA: 'Whities' vs. 'Twinkies,' while Cubs fans dream that they own Chicago

One more win, and the Chicago White Sox will be able to forget those horrid memories of last week in Minneapolis when 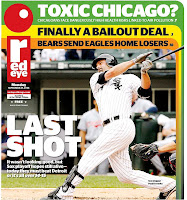 they managed to blow their long-held lead in the American League’s central division.

The White Sox finally finished their 162-game regular season schedule on Monday, and their 8-2 defeat of the Detroit Tigers gave them an 88-74 record – identical to the Minnesota Twins.

SO JUST AS the Cleveland Indians and Boston Red Sox finished 1948 with a tie, as did the Red Sox and the New York Yankees in 1978 and the Seattle Mariners and California Angels in 1995, the White Sox and Twins will now have the dreaded one-game tiebreaker to qualify for the playoffs.

A 163rd game will be added to the schedule for both teams – to be played on the South Side (thank goodness our Sox won that coin flip held a few weeks ago, or we’d be playing again in Minneapolis).

Now I know some geeky types who root for the Chicago Cubs are going to claim the fact that the White Sox did not finish off the Twins last week is evidence they “choked.” Of course, the fact that Minnesota didn’t then proceed to finish off the season this past weekend – losing two of three to fourth-place Kansas City Royals – is equally bad.

Ultimately, the winner tomorrow gets the AL Central Division title and (more importantly) the memory of their choke erased.

ONE THOUGHT ABOUT Monday’s “do or die” game, which is now nowhere near as important as Tuesday’s “do or die,” I was glad to see that Freddie Garcia did not get the loss for the Detroit Tigers.

The one-time Sox star from that memorable season of 2005 has suffered arm troubles, and hurt his shoulder so that he came out of the game with a lead. It was the Tigers’ relief pitchers who blew the lead for Detroit.

One thought I will have. In recent years, Major League Baseball has created the notion that the cities that host the teams that make it to the playoffs should hold downtown rallies to celebrate their pre-playoff accomplishment.

The White Sox had one in Daley Plaza in 2005, and the Cubs had one last year. They also are getting one this year – as the news anchor team over at WBBM-TV seemed to be wetting their pants with glee as live footage was shown of a giant Cubs cap being put on the Picasso statue in preparation for the Tuesday rally celebrating the Cubs’ division title over in the second-rate National League.

WILL THE WHITE Sox (if they manage to beat Minnesota on Tuesday) get a similar rally later in the week? Or are they just out of luck, on account of how long it took them to finally win a division title?

And would any city officials be bold enough to mention the White Sox and the possibility of rooting for an all-Chicago World Series in front of a crowd of Cubs partisans? Just imagine the “boos” Mayor Richard M. Daley would get if he dared suggest that the world does not revolve around Wrigley Field?

But talk of a second World Series in four years on the South Side is getting ahead of ourselves. After all, the Sox (or the “Whities,” as Twins manager Ron Gardenhire likes to call our team) still need to beat the Twinkies in order to say they accomplished anything in 2008.

If anything, that attitude is the big difference between the fans of the two Chicago ball clubs – both of which have stretches in their histories of losing teams.

I STILL REMEMBER a Cubs fan in 1998 who, on the day that the Cubs won a tie-breaker playoff game against the San Francisco Giants to qualify for the playoffs, said that made the season a complete success, on the grounds that the Cubs ended the season with “a symbolic victory.”

Any actual playoff victories would be a bonus.

By that logic, the White Sox would be able to claim a “symbolic victory” by forcing the Twins to play an extra ballgame.

By our logic, victory only takes place on the field. “Symbolic” wins are what we call losses. So let’s follow the lead of Captain Stubby and his Buccaneers. “Let’s Go, Go Go White Sox.” At the very least, let’s show the nation that this truly is a two-team town.