The Chicago White Sox (after a weekend of historic rainfall) finally get to play some baseball, and they manage to do well. 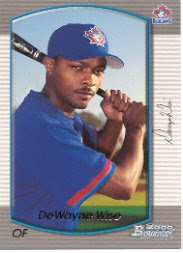 Winning both games played Sunday (a third game will have to be made up at some point in the future, if it has a bearing on a division race), the White Sox game even produced something historic.

HOW OFTEN DOES one get to see a grand slam home run by each team in the same inning? That’s what happened in the evening game (the one carried nationally by ESPN), and it is the first time it has happened since 2005, which means it technically is a more rare event than a no-hit ballgame.

So is Wise the big man of Chicago sports on Monday? Of course not.

He had to up and go and pull his intriguing moment on the same day that Chicago Cubs pitcher Carlos Zambrano threw a no-hit ballgame against the Houston Astros (played in Milwaukee, on account of Hurricane Ike).

WHEN ONE CONSIDERS that we’re now in football season (which means that every single Chicago Bears game has to be treated like a sacred event), that means even the Bears loss to Carolina 20-17 will get big play.

At best, you’re number three on the list of Chicago sports stories, as they will appear for today.

There’s one person who ought to be thankful for this. Octavio Dotel, the White Sox relief pitcher who gave up the grand slam home run that briefly made Sox fans think they were going to lose (did he ever get booed), will now have his moment of shame forgotten by most, and completely ignored by a few.

When combined with the Minnesota Twins’ loss to Baltimore, the White Sox have a 1 ½ game lead for their divisional title. And if they can keep up playing for two more weeks like they did on Sunday, then 2008 will really become the first year since 1906 that both Chicago teams managed to finish a regular season in first place.

That is, unless, the Cubs manage to figure out a way to blow it to either Milwaukee or St. Louis. If it were any other team, I’d say that’s ridiculous.

But these still are the Cubs.

EDITOR’S NOTES: For one night, the creator of this web site has to eat some crow (http://www.talk-sports.net/mlb/sucks.aspx/Dewayne_Wise). For those who are unaware, Wise (http://chicago.whitesox.mlb.com/team/player.jsp?player_id=276547) is one of the White Sox spare outfielders.
Posted by Gregory Tejeda at 1:24 AM

Why do I need to eat crow? Email me @ randy@talk-sports.net

No response? You can't tell someone to eat crow and refuse to tell them why. Makes you look like a coward.