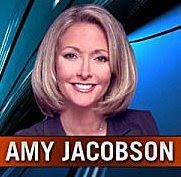 the way they covered her coverage of a Will County missing person case, it was a predictable move.

Jacobson has been out-of-work since the summer of 2007 when the NBC station at which she was employed for just over a decade let her go. She is reduced to making occasional guest appearances on Chicago radio stations, but her days as a broadcast news reporter in this city are likely done.

ANYTHING THAT CAN be done to help regain a portion of her professional reputation is a plus – she has nothing to lose. Whether a judge will be willing to let the lawsuit go through is questionable, but we’ll see.

What was not predictable was the lawsuit filed last week by the family of Craig Stebic. They claim the WBBM-TV’s stories that were meant to make Jacobson look ridiculous also managed to make the Stebic family look silly.

At stake is the Stebic story, as Craig’s wife has been missing for years now. At the time that Jacobson was covering the saga in 2007, law enforcement officials in Will County were actively trying to find Lisa Stebic.

Some like to speculate that Craig did something to have his wife killed, but no evidence has come forth that would even come close to allowing police to make an arrest in the case. Officially, this is nothing more than a missing persons case.

BACK WHEN THIS story was hot, WMAQ-TV liked to think that it was a leading news organization that was keeping ahead of the story – in large part because Jacobson had developed a personal relationship with the Stebic family.

Basically, the family trusted her a little bit more than they did other reporter-types who would come around the house trying to find out what was going on.

So on the day that Jacobson says she got a call from Craig Stebic wanting to talk, she came – even though she had her kids in tow. Because she had been planning on taking them swimming, they came along with her and spent a couple of hours in the Stebic family pool while Amy talked.

We really don’t know what information, if any, she got out of that particular interview, because the focus of the story quickly changed when a neighbor called someone, and WBBM-TV found out.

THE END RESULT is the now-famed video stills of Amy Jacobson talking on a telephone, while clad in a bikini top and towel that is about as unerotic an image one could ever see.

Yet put the words “blonde reporter” and “bikini” into a story, and everybody envisions some sort of salacious activity. The Stebic lawsuit, filed Friday, claims that Channel 2 wrongly implied a sexual affair was taking place – an act that Jacobson and Stebic have vehemently denied, and of which no one has offered evidence.

They want money from the CBS-owned station. And for what it’s worth, they also are suing the neighbor whose call tipped off the station to the image that everyone will forever have burned into their brain when the name “Amy Jacobson” comes up in conversation.

WBBM-TV officials won’t say much about the lawsuit, other than to say they look forward to defending themselves in court.

NOW AS A reporter-type myself, I fully understand what motivated WBBM-TV to act as they did. The response to learning that your competition in the news business has a potentially thrilling story that you don’t is to “match it.”

In reality, “match it” means “drown it.”

Stick that story in so much cold water that it loses whatever spark it might have ever had. If one can make the competition look ridiculous, that is almost as thrilling as getting the big story for oneself.

That is what happened to WMAQ-TV, which officially said they accepted Jacobson’s forced resignation because of concerns that she had become too close professionally to the Stebic family to objectively cover the story.

NOW BACK WHEN this story happened, I thought that terminating Jacobson’s employment was an over-reaction – although I know of many others who are convinced she did not suffer enough for her behavior.

What intrigues me is whether this Stebic lawsuit has a chance of going anywhere. I have no problem envisioning the Jacobson lawsuit being seen as a crass move, and rejected by the courts.

But will those elements of our society who want to blame newsgathering organizations whenever possible be willing to let the Stebic lawsuit advance in the judicial system because it would be perceived by some as punishing a “big bad news organization” for picking on people.

Will this become one of those lawsuits that advances in the courts, only to be ruled on objectively by an appeals court? Which means years of litigation, regardless of who ultimately prevails.

OF COURSE, THERE are those in law enforcement who think the Stebic family is getting off lightly in terms of this whole affair, and would think it ridiculous for them to claim they are the victims in any way.

I’m curious to see which point of view prevails in this legal fight.

EDITOR’S NOTES: The Stebic family wants at least $50,000 to compensate them for what they say (http://www.chicagotribune.com/business/chi-stebic-suit-both-28sep28,0,458977.story) is their humiliation due to Channel 2’s coverage of their family’s moments in the news.

I have a little more sympathy for Amy Jacobson’s situation than certain other people (http://www.beachwoodreporter.com/tv/amy_jacobsons_resume.php) who observe the news media.

Jacobson’s lawsuit (http://chicagoist.com/2008/07/08/amy_jacobson_sues_cbs_2.php) tied to her dismissal (http://www.chicagotribune.com/news/chi-070709jacobsonjul09,0,3666517.story) as a pseudo-investigative reporter on television is still pending. Who’s to say when anything will be resolved.
Posted by Gregory Tejeda at 12:01 AM

I fully understand what motivated WBBM-TV to act as they did aswell, do you think she has any chance in winning?