The past few days have seen the uprising of a pair of people who were hoping to use the Chicago Cubs’ likely appearance in the baseball playoffs next month as an excuse to enrich themselves, either in the wallet or in their ego.

There’s the landlord of the residential building at Waveland and Kenmore avenues, which is right across the street from the back wall of Wrigley Field’s left field bleachers.

THIS IS THE building that has come to be known for the way in which its rooftop has been painted so that an Anheuser-Busch ad for “Budweiser” brand beer is visible to the roughly 40,000 people crammed into the stands for Cubs’ games.

Then, there’s the Rev. James Meeks, who is planning his latest protest to promote the concept of inner-city kids getting cheated when it comes to the quality of their educations. He’s talking about having a few thousand kids in tacky orange t-shirts create a ring around the ballpark on the day of Game 1 of the first round of the National League playoffs.

As he envisions it, all those network broadcasters on hand to witness the Cubs fizzle out in the playoffs yet again will wonder publicly about what is going on, and will promote his cause on the air during a national sports broadcast. 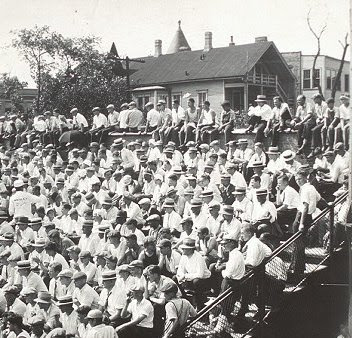 Packed crowds at Wrigley Field, such as this 1930 Opening Day throng, are the potential audience for a pair of people who want to either make more money or feed their egos with various stunts tied to potential Cubs playoffs baseball. That building in the background is the one that now has a tacky "Budweiser" ad painted on its roof. Photograph provided by Library of Congress collection.

I’m not sure which of these two annoys me more.

THE REV. MEEKS (also a senator from the Roseland neighborhood) could take the prize because he’s trying to use children to advance his cause (and bloat his own egotistical sense of self-importance).

But the property owner at 3701 N. Kenmore Ave. is so blatantly tacky in his desire to make money off a Cubs’ appearance in the playoffs, that I literally cheered when I learned a Cook County judge did the right thing in ordering the landlord to put an end to his “scheme.”

What is at stake is that the “Budweiser” ad has become a part of that outfield backdrop that many think gives the Cubs’ antique stadium its unique charm. So the landlord was looking for an excuse to put the rooftop up for sale to the highest bidder.

Either Anheuser-Busch would have to cough up a few more bucks to keep their spot (which turns up on national television just about every time a home run – or even a cheap fly ball – is hit to left field), or some other company would come in and offer bigger bucks.

THE LANDLORD TRIED claiming that a rent payment was missed, thereby justifying him covering his roof with a brown tarpaulin, which prevented the ad from showing up (with the exception of a little sliver of white lettering that allowed us to see the bottom of the “ud” in “Budweiser.”

But Judge Martin S. Agrin on Friday issued a restraining order against the landlord that allows Anheuser-Busch’s ad to be exposed to the public once again.

The order would indicate there is the possibility that Anheuser-Busch was never properly informed that their rent payment was missed. One factor involved in the case is that the building was recently sold, and this is a new landlord who probably does not feel like waiting for a lease agreement to expire before getting a crack at negotiating a new advertising rate on his property.

By then, the Cubs could stink once again, and any windfall from having the ad seen on national television would be lost.

BUT WHILE COLD cash motivated one person wanting to leech off the Cubs, ego is at stake in the other.

Rev. Meeks told a gathering this week at the Union League Club of his plan to use Cubs playoff baseball as an opportunity for an attention-getting stunt.

He literally hopes he can get Tim McCarver or Joe Buck to quit talking baseball for a few minutes and start speculating on the chances of improving the quality of public education programs in Illinois.

Think I’m kidding? He told a gathering in Chicago, “We want the Goodyear blimp shot.”

PERHAPS IN HIS wildest dreams, he thinks he can get Jeanne Zelasko to do one of her silly little rhymes about schools, instead of ballplayers.

I can’t help but think that the Reverend’s recent stunt on the North Shore has gone to his head. Getting some sympathetic attention from the New Trier officials when he brought inner-city kids to visit the suburban schools may have made him think everybody cares about his cause.

The sad thing is, they do not.

I couldn’t help but notice the amount of nasty attention Meeks got for going to the suburbs. But trying to stand in the way of Cubs’ fans who want to enter the ballpark to watch a ballgame (particularly a playoff game where the cheapest of seats go for over $100 per seat)?

I CAN’T HELP but think those Cubs fans would treat a White Sox fan with greater respect than they would a kid who wants to “talk politics” (which is the way they view anyone who thinks ERA means anything other than Earned Run Average).

Would the reverend literally be adding to the congestion of the Lakeview neighborhood on a playoff game day? Would he be placing children in the path of a mob?

Does the reverend need to get a grip on reality? There’s a good chance that baseball fans would not only ignore his issue, they also would gain a negative connotation to whatever he says. Trying to turn baseball into a political issue is never going to work.

So reason Number 1 that I do not want the Chicago Cubs doing anything of significance in the playoffs is because, quite frankly, I can’t stand the Chicago Cubs – or anything having to do with the National League.

BUT REASON NUMBER 1-A is that having the Cubs in the playoffs creates a forum for these greedy or egotistical people to come out and try to tout their issues.

If it were at all possible, I’d be rooting for the Cubs to fail to make it to the playoffs, although I realize that they have come so close that it would take an athletic miracle of historic proportions for them to fall short now.

So what I want now is for a Cubs playoff performance that is so mediocre that no one particularly cares about paying attention to it. That would result in minimal benefit to the Rev. Meeks, or the landlord who already is able to charge prime rent to his tenants for giving them the opportunity to say they live so close to Wrigley Field.

And if they gain minimal attention, it means the true focus of the baseball playoffs in Chicago can go back to where it belongs (the South Side, I can only hope).

AS AN ANHEUSER-Busch spokesman said following Friday’s court ruling, “We are glad the focus can now return to where it rightfully belongs, the game.”

You know something is out of whack with an issue when a beer brewer winds up being the voice of reason.

EDITOR’S NOTES: A rooftop advertisement for “Budweiser” beer that has been across the street (http://www.chicagobreakingnews.com/2008/09/judge-to-rule-on-budweiser-sign-at-wrigley.html) from Wrigley Field for 18 seasons will be restored this weekend.

From New Trier to Wrigleyville, who’s to say where the Rev. James Meeks will use for his (http://www.suntimes.com/news/education/1172950,CST-NWS-meeks19web.article) next stunt to try to garner attention to the cause of improved public education for inner-city youth.