Illinois' issue not a Chicago concern (but it should be). Yes, it should 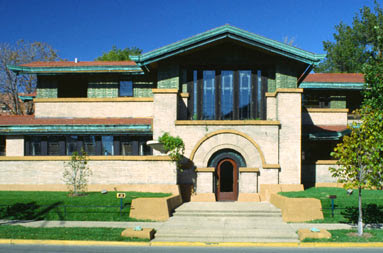 If the proposed budget cuts put forth by Gov. Rod Blagojevich take effect Oct. 1, this historic site is one that will no longer be accessible to the public. Photograph provided by State of Illinois.
It’s the political controversy that is rocking Illinois, yet most people in Chicago and the surrounding area could care less about.

It is Gov. Rod Blagojevich’s attempt to reduce state government spending, in part by cutting the amount of access to which the residents of this state have to its various historic site.

PART OF THE governor’s spending reduction plan called for cutting the Illinois Historic Preservation Agency’s budget by $2.8 million for the ongoing fiscal year that run through June 30, 2009.

To achieve that lesser level of spending, the agency is going to have to lay off some of its employees – many of whom are the tour guides who work at the various historic sites. That will result in many sites being closed to the public much of the time, and some sites will be open so infrequently that it raises the question of why bother to keep them open.

This is a controversy – once one gets outside of the six Illinois counties that comprise the Chicago area. To the people of rural Illinois, this is an attack on some of the few assets they have within their boundaries.

When it comes to trying to attract tourism dollars, these historic sites are the few things they have going for them. What else is there to see, if not for the many Lincoln-related sites in central Illinois, and some of the places in central and Southern Illinois whose natural beauty serves as an attraction.

WHAT GOOD IS having a state park in or near your community, if it is not open for people to visit?

That issue is what caused about 50 protesters to gather outside the Executive Mansion in Springfield on Saturday. American Federation of State, County and Municipal Employees, the labor union that represents many of the tour guides who work at the historic sites, say they plan to hold many similar stunts in coming weeks to get the public even more outraged with Blagojevich than they already were.

Yet the problem is that these sites, while scattered across a large swath of Illinois, do not fall within the Chicago area. So the portion of the state that accounts for about two-thirds of Illinois’ population is not directly affected.

That makes it very easy for many of us in the Second City to ignore the affair. On the surface, it doesn’t affect us, so why should we worry?

I’M SURE ON a certain level, that logic is what made it possible for Blagojevich, in his mind, to justify the cuts.

The problem is that those sites are not purely local attractions. In fact, many of them make the perfect quickie vacation locations for those of us Chicagoans who want to make a daylong car trip outside the city, but don’t particularly feel like venturing into southern Wisconsin or that bi-state region on the other side of Lake Michigan known as Michiana.

In all, the layoffs of 75 historic preservation employees will result in the closing of 12 historic sites and 11 state parks. These cuts are on top of the fact that all state historic sites this summer started closing two days per week to save some money.

While state officials have tried to downplay those cuts by saying the seven-day schedule will resume in spring 2009, the fact that some are being closed outright makes one skeptical that anything will ever be fully restored to its former public access.

WHAT MAKES IT particularly sad is that sites including the Old State Capitol and Lincoln/Herndon Law Office in Springfield, along with Lincoln’s Tomb at Oak Ridge Cemetery and the New Salem state park near Petersburg all are among those sites to be reduced.

It comes at a time when there is a national effort to pay tribute to the memory of Abraham Lincoln in the months prior to the 200th anniversary of his Feb. 12, 1809 birth date.

It is a time when the states of the Midwest and places in Washington are supposed to be working together to improve access to the Lincoln-related sites.

Yet at a time when Kentucky is boasting of the fact that Lincoln was born in their state and Indiana brags of how he was raised there, Illinois – the state where he lived his adult life and established his political experience that enabled him to become president in the 1860 elections – is cutting back.

WHILE I AM the first to concede that the state can’t spend money it doesn’t have, this just seems the wrong time to get shortsighted about Illinois history.

I’m a Chicago-born guy who has kept going back and forth from the city during his life. I have seen some of these sites to be affected up close, and they rival the most intriguing sites located within Chicago.

There’s a reason Democratic presidential nominee Barack Obama keeps turning to the Old State Capitol, rather than Daley Plaza with the Picasso in the background, for his major campaign pronouncements.

Personally, the thought of the Dana-Thomas House (a Frank Lloyd Wright-designed house near downtown Springfield) being shut down because somebody was shortsighted in their thought is particularly disappointing. It is a unique structure that rivals anything the famed architect did anywhere else in the world.

SO IF THE AFSCME officials (whose primary concern is not historic preservation, but maintaining state jobs for their members) and other activists really want to gain traction for their cause, they ought to be taking their fight to Chicago.

They have to come up here (perhaps to that very same Picasso statue) to make us Chicago residents realize that we, too, will suffer a loss if these cuts are allowed to take place. Heck, if they really wanted to get creative, they’d venture their way up to the Ravenswood neighborhood and picket outside the Blagojevich house.

Perhaps getting the neighbors to view the governor as something other than the guy who’s responsible for additional police protection on their block will cause Chicagoans to care about this issue.

For if Blagojevich is able to get away with these cuts by taking advantage of the lack of interest many of us Chicagoans have in the rest of Illinois, that would be wrong. If anything, it would give those downstaters more ammunition for their mental attacks when they argue that Chicago should be cut loose from the rest of the state.

EDITOR’S NOTES: The first of what could be several protests related to downstate historic (http://www.sj-r.com/news/x1780973810/Cuts-at-historic-sites-protested) site funding cuts was held this weekend.

It’s more than just Illinois’ history that is being cut (http://www.news-gazette.com/news/local/2008/09/14/governors_budget_cuts_reach_beyond_closure_of_state_parks) with the upcoming cuts, which take effect Oct. 1 and Nov. 1.

The Illinois Senate could have voted on a measure that would have provided some emergency funding (http://www.dailyherald.com/story/?id=234432&src=109) to avert the historic (http://www.pantagraph.com/articles/2008/09/14/opinion/133085.txt) site and state park cuts, but elected instead to hold off until mid-November before returning to Springfield to take any kind of action.
Posted by Gregory Tejeda at 12:01 AM