We’re split in response to immigration

There’s no doubt about it that we as a nation have a serious split when it comes to the issue of immigration. Then again, we’re split on just about every issue, so why should this be different.

Immigration has shot to the attention spans of many people who previoulsy weren’t paying much attention to the issue, either out of ignorance or indifference. A recent Gallup Organization poll found that 10 percent of the public now believes that “immigration” is the most important problem facing the nation.

WITHIN THE MIDWESTERN U.S., it is not quite as high. Only 8 percent of us think it is the Number One issue. But that compares to just one month ago, when only 1 percent of midwesterners (and 2 percent nationally) would have thought so highly of the issue.

The point is that the issue is on the radar screen of many, including those of us who live along the shores of Lake Michigan. Which means many of us feel the need to “do something” to show our outrage – one way or the other.

Because the responses show just how conflicted we truly are.

Officials from Highland Park High School already are receiving national praise and condemnation for their decision this week to have its girl’s basketball team (which won a conference title for the first time in more than two decades) skip participation in a national tournament.

THAT TOURNAMENT WAS being played in Phoenix, and school officials decided they did not want to send the girls into such an environment as Arizona has become in the weeks since state officials passed a law requiring local police to more vigorously enforce federal immigration laws.

We even got a statement from the school’s assistant principal saying, “we would want to ensure that all of our students had the opportunity to be included and e safe and be able to enjoy the experience. We wouldn’t necessarily be able to guarantee that.” Although we also got former Alaska Gov. Sarah Palin using her Rosemont appearance Wednesday to make it clear she did not approve of negativity toward Arizona. 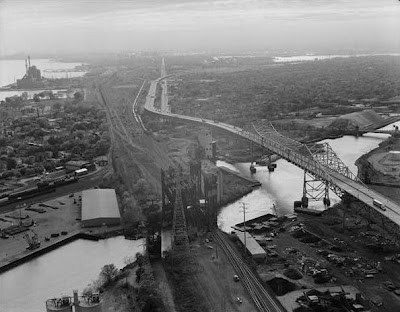 This image of the Chicago Skyway may be a half-century old, but it shows clearly just how close parts of Chicago are to Indiana, where officials are threatening to enact their own Arizona-inspired takes in immigration enforcement. Photograph provided by Library of Congress collection.

I will give a little bit of credit to a school district that might easily have been able to think of this issue as something that doesn’t directly affect them. Nobody would have ever expected that school to take any action. The fact that they were willing to make such a statement says something for their character.

Now I know some people are arguing that this amounts to politics interfering with sports. Student-athletes shouldn’t be used to make political statements. They should just play the game, these people will argue.

OF COURSE, THEY’RE arguing that the very fact that the game would get played in such an environment is a political statement in and of itself. Of course, it would be a political statement in favor of Arizona and their policies that are going to turn out hostile toward the Latino population (30 percent of the state, and growing). Which when one considers that Arizona used to be part of the territory that was the New Spain colonies (and later Mexico) seems small.

Not that Highland Park was the only place to make a statement. To the south in Calumet City, the city council there passed a resolution Thursday saying their city officials will not attend conferences in Arizona, nor will they do business with companies that are significantly based in that state.

Admittedly, that particular south suburb does not do much business with Arizona entities. Officials there admit this is more a “symbolic” gesture to show the growing Latino population in that suburb that they have support from their local government officials.

But there are those officials who are trying to claim for Calumet City the status of “First Midwestern Municipality” to pass a resolution criticizing Arizona. I don’t know if that is literally true, because I know the Cook County Board is considering a resolution making a similar statement. There may have even been another town that slipped something past my attention.

BUT I DO know most of the most vocal criticism is coming from the Southwestern U.S., particularly in Los Angeles – where officials earlier this week passed their own resolution that treats Arizona in spirit the same way governments acted in the mid-1980s when many rushed to pass resolutions condemning South Africa and the set of laws known as “apartheid” that made that country’s now-defunct segregation the law of the land.

In fact, all of the states surrounding Arizona are making it clear they do not plan to follow Arizona’s lead on the immigration issue. It seems to be states that are farther away from the issue that most want to let their paranoia run rampant.

In Illinois, Gov. Pat Quinn has said he thinks Arizona was wrong and he would never approve such a measure here. But in neighboring Indiana, a state legislator is threatening to push for such a law in the Hoosier state next year if the federal government does not start behaving in a way he deems appropriate to the issue.

Now why should we care that Indiana wants to impose this type of Arizona-inspired nonsense on themselves? It may be their right to do so.

BUT LET’S NOT forget that Indiana is the one surrounding state that shares a border with Chicago. Down in the land of “Avenue O” and all of the alphabet streets, Indiana is not some abstraction. It is the place with the steel mills lurking in the distance that do their part to pollute the surrounding air. There are Chicagoans to whom Indiana is a daily fact of life. Such a change in law would impact us.

One can literally go to 106th Street and State Line Road, in the shadows of the Chicago Skyway, and look to the east across the street at Indiana. It makes me squirmish to think we could soon have such Arizona acts enforcable so close to our own borders.

This is not an issue for our local government types to enforce (just as immigration laws are not something for local police to be bothered with). The solution to all of this nonsense is going to have to come from Washington, where President Barack Obama gives the issue lip service but has aides who secretly wish they could postpone this battle for a future date.

The problem is that this fight is here now, and must be addressed as promptly as possible. The sooner that federal officials realize that fact, the better off we all will be.

Back during my brief stint in city government, the tactic was to stall as long as possible if it was information you didn't want out. This new approach may prove to be more effective--it's definitely more sinister.