A duel between the 1st and 2nd cities

It seems we now have something resembling a good ol’ fashioned Chicago/New York brawl on our hands, and not because the Yankees are in town (that won't happen until the end of August). 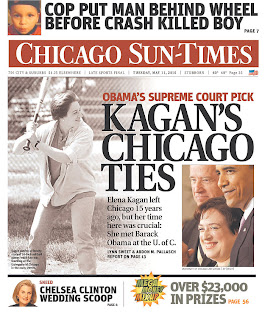 I got my kick out of seeing the provincialism of the Chicago newspapers versus their New York counterparts, both of which seemed determined to claim that new Supreme Court of the United States nominee Elena Kagan is really a hometown girl – one of our very own.

THE FACT IS that she is a New Yorker who lived and worked for a few years in Chicago. But that didn’t stop the stories in both cities that tried to claim Kagan was truly a native of their own boundaries.

Which amuses me, makes me laugh, because for all the blowharded talk that we get from people in both municipalities about how chic and sophisticated they are and how the rest of the world (or at least the rest of the Midwest in the case of Chicago) looks to them as a role model, we can be so rube-ish at times.

You’d think we were French Lick, Ind. – going on and on even now about how one-time pro basketball star Larry Bird once lived there.

But that was the level of boosterism we got from the Chicago Sun-Times, which managed to come up with a picture of Kagan from back when she was on the University of Chicago law school faculty. Not that she was doing anything academic – she is seen with a bat in her hands playing softball.

THE 16-INCH KIND, the newspaper tells us. Although the look in her eyes is just a little too clear for her to be all liquored up like many an aging Chicagoan who plays the slow pitch game because they can’t handle anything more athletically challenging. 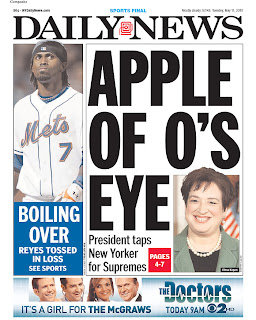 Of course, that wasn’t the only tidbit we got from The Bright One.

We also learn the address of Kagan’s apartment in the Lincoln Park neighborhood (which makes me wonder if the landlord will now use this factoid to justify a significant rent increase to the current occupant – hey, a “celebrity” once lived there), that she was a regular in the lunches held by the law school faculty and that she occasionally treated her students to lunch at Café Ba Ba Reeba.

I feel like the tapas place on North Halsted Street owes somebody some money for the free publicity they just received.

AS IT TURNS out, Kagan was like many an out-of-towner whose work brings them to Chicago. She left the Second City when a better job opportunity came along. In her case, it was a chance to work at the White House under then-President Bill Clinton.

Clinton even tried to make her a judge, but partisan politics (against William J., not Elena personally) caused the appointment to stall.

The University of Chicago wasn’t all that enthused, according to the Sun-Times, about having her come back just so she could wait out her time for another political appointment. So that is what ultimately caused her to leave the shores of Lake Michigan, ultimately settling in at the law school at Harvard University.

While some might think it was her presence there that gave her resume the substance that caused President Barack Obama to choose her for the spot of replacing retiring justice John Paul Stevens on the Supreme Court, one can’t underplay the significance of her time along the Midway Plaissance.

IT WAS THERE that Kagan and Obama met (he was the one-time instructor at the U of C law school). Any personal tie that would have developed between the two that would give her the edge over other potential nominees (including Diane Wood, the one-time Chicago law school professor who is a federal appeals judge for the Northern Illinois district, who some thought would be the local “favorite” to get a high court nomination) occurred in the Second City.

In short, New Yorker Kagan had to come to Chicago to find herself. And a little piece of our city is likely to be with her no matter what ultimately becomes of her life or how long she winds up serving on the Supreme Court (at 50, she has the potential for decades of public service as a high court justice).

One point I did find amusing was the angle played up by the New York Daily News – the one that stated Kagan was a long-time New York Mets fans, compared to Obama’s other appointment to the Supreme Court.

Sonia Sotomayor has never done a thing to hide the fact that her baseball loyalties lie with the New York Yankees. Are we going to have judicial “brawls” everytime the two teams take each other on every season? 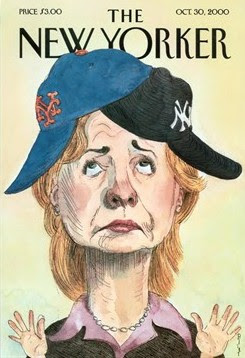 POSSIBLY. BUT I think the better comparison lies between Kagan and Secretary of State Hillary R. Clinton.

For the Sun-Times reported that Kagan used to go to Chicago White Sox games when she lived here in the early 1990s (back in the days when Frank Thomas was an undisputed star hitter who still played first base). So Kagan is a Mets fan who took to watching the White Sox.

By comparison, the one-time Hillary Rodham grew up in the Chicago suburbs, rooted for the Chicago Cubs, then took to cheering for the Yankees (occasionally wearing their cap) when she moved to New York to become a U.S. senator in the 2000s.

It sounds to me like Elena is the anti-Hillary, at least on the baseball diamond. And that may be more interesting than any of the other trivial tidbids we got from our newspapers on Tuesday.