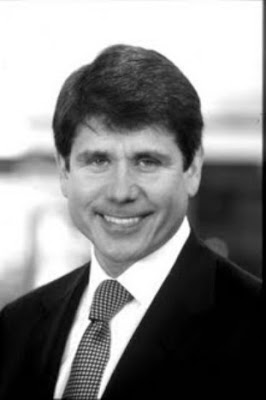 Perhaps it is a sign that I covered too many executions in Illinois (7 during the 1990s, along with other inmates who appealed the process). But watching Rod Blagojevich file an appeal to the Supreme Court of the United States to try to postpone his trial on assorted corruption charges is starting to feel like watching a condemned man try to find any scheme that manages to postpone his “death date.”

It is inevitable when a condemned inmate’s execution date approaches that his attorneys run through the process of filing token appeals to every court up the judicial ladder, in hopes that somewhere, someone with some legal authority will be moved enough by the plea to justify issuing a stay that postpones a trip on the gurney to the lethal injection machine.

THAT TRIP UP the legal ladder invariably winds up at the Supreme Court in Washington, where attorneys will file after-hours appeals and judges will wind up having to put in some extra duty before deciding whether or not there is any chance of legal merit to the condemned’s position.

In fact, the justices on the nation’s high court have the country split up so that each presides, so to speak, over a region. In short, it comes down to what one man thinks, and is willing to tell his (or her) colleagues on the high court what to do – since there really is little reason to have all nine justices read through the last-ditch appeals.

That is what occurred to me when I read the Chicago Tribune report that confirmed Blagojevich’s request for a delay in his trial was received late Thursday, and was sent to the chambers of retiring Justice John Paul Stevens.

Which means that on Friday, it was Stevens’ clerks and other staff who were having to read through all the legal drivel offered up by Milorod as to why his trial should not begin in 12 days in the U.S. District Court for Northern Illinois (otherwise known to us locals as the Dirksen Building).

THOSE CLERKS WILL report to Stevens, who will make the ultimate decision. Late Friday, Stevens said he would give prosecutors one week to respond in writing to Blagojevich's request. Does this mean Stevens’ last act as a Supreme Court justice will be to decide whether or not to condemn Blagojevich to a trial this summer that many people are convinced will result in his serving time in a federal correctional system (and which many Republican partisans are hoping sentences Democratic political candidates to death on Election Day come Nov. 2)?

After all, guilt by association, they will claim.

Blagojevich’s legal motion for a trial delay has just has the same morbid overtone to it that many of the last-ditch legal appeals from condemned inmates have. There is a sense to people who follow the cases that everything has already been argued, and that this final appeal to the Supreme Court is nothing more than a formality before giving the condemned man (it has been so long since Illinois put a woman to death that I don’t think it sexist to say that all the condemned are “men”) his final sendoff.

Which means we all now sit and wait for word from the court. It likely will be a sudden snippet of rejection, followed up hopefully by the sight of Milorod seriously preparing himself for trial.

IT MAKES ME feel like the next step will be someone asking Blagojevich what he would like to have for a “last meal” before the moment of truth. Will he have any last words for us?

Actually, on that last point, the answer is, “yes, he will.”

For the federal trial is likely to last into October. I wouldn’t be surprised if jury selection lasted most of the month of June (got to weed out anybody whose ideology is so intense that they feel it is their “patriotic duty” to Illinois to convict the bum) and the jury deliberations for a verdict lasted several weeks. You just know Blagojevich won’t be able to resist taking the stand on his own behalf.

Which is why I am sure that the same Democratic Party partisans who were Blagojevich’s biggest critics and led the effort to impeach him from office probably wouldn’t mind if there was some delay that put the trial off until after those Nov. 2 elections.

BLAGOJEVICH CONTENDS THAT we need to see how the Supreme Court rules with regards to the legal appeals of former Hollinger Inc. owner (which once included the Chicago Sun-Times and its many suburban newspaper properties) Conrad Black in a case that challenges the degree to which stupidity and incompetence by officials ought to be considered criminal behavior.

Considering that I have always thought Blagojevich’s conduct as governor was more about arrogance and stupidity (trying to show other Democratic Party leaders, such as Illinois House Speaker Michael Madigan, D-Chicago, who the boss truly is) than truly criminal intent, it might be relevant. But I’m sure there are enough people who are going to be so willing to show they’re not showing a bias in favor of Blagojevich that they will bend over backward to oppose him.

Personally, I wish the two events (a likely Blagojevich verdict in late October, and Election Day on Nov. 2) weren’t so close together timewise because it is a ridiculous distraction, although I am not convinced that Stevens or anyone else with the Supreme Court will be inclined to do anything on Milorod’s behalf. Then again, I think most of the people who will think this is relevant are also the same types who would never have voted for Democratic Party candidates to begin with. Which means it is an irrelevant distraction.

It also means we can likely keep that June 3 date circled on our calendars for the beginning of the Rod Blagojevich Reality Show (follow the legal saga of a real-life political egomaniac) emanating from Chicago.