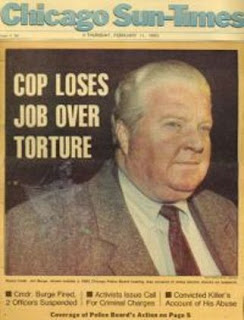 A new major airport for the Chicago area, and the idea that Jon Burge is a police commander who uses torture to do his job.

Both of those are concepts that have been in the news off-and-on since before the days when I first became a reporter-type person in Chicago (some 23 years now). But now, it looks like we’re taking steps toward putting one of those stories to rest.

BURGE IS A now-retired Chicago Police Department officer who once ran the violent crimes unit for the Pullman Area (the city’s Far South Side) who faces criminal charges, and jury selection for his upcoming trial began Thursday.

At this rate, the Burge verdict may come some time just after Rod Blagojevich is scheduled (June 3) to go on trial.

Stories have long been circulated in this city about how the cops in Pullman Area used excess violence in order to get confessions from criminal suspects. Those stories managed to have enough credibility that city government has paid out nearly $20 million to settle the lawsuits filed by those defendants.

There also was an investigation by a special prosecutor who said in 2006 that the conduct of officers under Burge’s command did rise to the level of excessive force. But the statute of limitations had passed, making his prosecution on charges of the violence impossible.

HENCE, WHAT WE’RE getting a trial on beginning now is whether Burge committed perjury related to a lawsuit filed in 2003 by one of the defendants who claims to have been beaten and electrically-shocked. Burge at that time said under oath that no torture took place.

In a sense, Burge becomes the 21st Century equivalent of Al Capone, whose criminal conviction ultimately was for evading sufficient payment of income taxes. Burge, who is now 62 and reportedly not in the best of health, may wind up spending his final few years of life in a federal correctional facility – if found guilty.

Then again, a lot of this case is going to come down to how sympathetic a figure Burge can present of himself. Because there are those people in our society who are absolutely determined to see the people who make accusations against Burge as nothing but criminals who are worthy of whatever treatment they received back in the days when they were in the custody of Burge’s officers.

We’re going to have a split between those who view Burge as a criminal, and those who are determined to think he’s the victim of a fraud being perpetrated by criminals. But it also means that we’re sometime this year going to see this issue culminate in a verdict that will end this issue.

WHETHER HE WINDS up in prison or as an elderly retiree who fled Chicago for Florida, I’m looking forward to the day when the name “Jon Burge” is no longer a pending issue in the news.

Now if we could only resolve the fate of a new Chicago area airport …?

EDITOR’S NOTE: Perhaps it is time for people to re-read the reporting done by the Chicago Reader throughout the years that relates to the one-time Pullman Area commander.
Posted by Gregory Tejeda at 12:20 PM