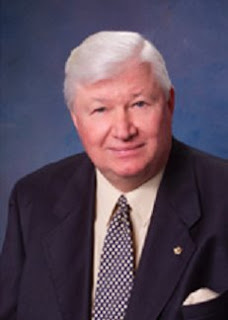 It is at moments like this that I feel the spirit of James “Pate” Philip lingering over Illinois’ state Legislature.

It was the one-time Illinois Senate president who first got the General Assembly to think in terms of finishing their business prior to the end of the state fiscal year each June 30th. It was during his time that the Legislature started to think of Memorial Day as the time each spring when their business ended.

BUT PATE HAS not been a part of the Statehouse Scene for some eight years now. And as often happens when something passes along from its originator to other people, the goal becomes all too flawed – if not downright shrill.

I write that statement because that is how I feel about the fact that Friday is the date that the Illinois General Assembly is scheduled to adjourn its session for the summer. In theory, they won’t return to Springfield until just after the Nov. 2 elections.

I write “in theory” because we really don’t know. I’m not even sure if this truly will be the final day. Some people seem to think they might stay in place through the weekend, before adjourning for the summer, although there also has been talk of the Friday night "end of session" party, which means they most likely don't want to return unless absolutely forced to.

The one thing that everybody seems to agree upon is that our state legislators really don’t want to be at the capitol any longer than necessary. They want to “go home” and start focusing on getting themselves re-elected. Or maybe they want to spend some time off at the “Pate” Philip State Park, near Bartlett.

THAT FACT WOULD not bother me, except for the fact that the state Legislature isn’t even close to coming up with a budget that does anything to balance out the state’s financial problems. We really don’t even have any short-term solutions in place, other than some rhetoric about holding off on making payments to fund the various state pension programs. 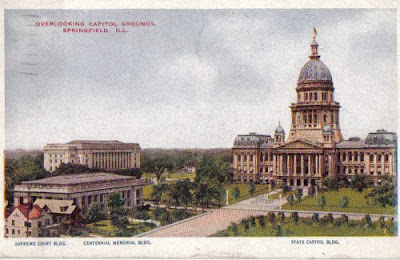 The "Statehouse in Springpatch" is soon to be a virtual "ghost town," even though there remains business to be complete.

In short, we have a whole lot of state political people who are looking at ducking out on their responsibilities – which ought to include passing a budget that maintains state government in some form through the fiscal year that runs from July 1 through June 30, 2011.

Now I remember that Pate Philip always used to push for the early adjournment on the theory that there ought to be limits as to what state government is doing. Keeping the legislators in place any longer than necessary was just inviting trouble by giving them the opportunity to create mischief.

Of course, some of what he would define as “mischief” is what some of us would call responsible government on the part of the people. But I can’t help but think that the idea of leaving early has been taken to an absurd level with the idea of an early May adjournment date.

THEY HAVE NOT even fulfilled the basic requirement of a budget for the upcoming year, which will cause problems because there are many school districts and municipal governments across the state that are depending on a certain amount of their funding to come from the state – only the state is still uncertain how much they will be able to provide.

Other than saying that the level will be cut, we don’t know how much the cuts will be. The delay in a state budget will have repercussions down the chain of government activity, which ultimately will impact us Illinois residents in hundreds of ways – literally, each entity of “government” that we deal with in our lives will find a way to harm our lives due to the uncertainty.

One big sting from the state will result in countless little stings.

Somehow, I doubt that was what Pate ever intended when he suggested the end of May as the proper time for the Legislature to complete its business. I can’t help but think Pate himself is among the people ranting about the current incarnation of the General Assembly being unwilling to make the hard judgment calls that would allow them to approve a budget for state government.

NOTE THAT I am not using this commentary to urge any kind of tax increase (which seems to be the preference of Gov. Pat Quinn, even though he won’t use his authority to push for it) or for any kind of draconian cuts in state funding (which certain GOP legislators are more than willing to make). I’m of the opinion that the true long-term solution is going to be a combination of both, and will probably have to be imposed over the course of the next several years.

But by thinking they can get away with ramming some sort of short-term solution through the legislative process to get the state government through the next few months, then dealing with the rest of the fiscal year come the fall “Veto Session,” it’s almost like our legislators are trying to vote for “None of the Above” when it comes to resolving our state’s financial problems.

By electing to do nothing in the way of a long-term solution, it makes me wonder if our legislators – both of the Democrat and Republican persuasion – are showing themselves to be worthy of the “None of the Above” option come Election Day.

James "Pate" Philip has an important birthday coming up. He will be 80 on May 26.