There were no “good guys” when it came to Illinois’ redistricting proposals this yr.

I may well be the one person who is pleased that both of the major measures that were supposed to reform the way Illinois redraws its political boundaries to reflect population changes went down to defeat.

State legislators affiliated with the Democratic Party used their power to kill off the Republican alternative – the one that actually got the League of Women Voters and other good government groups to sign on. 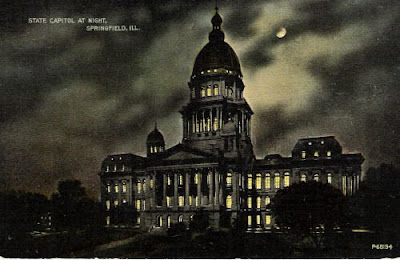 More gloom and doom at the Statehouse on account of redistricting "reform" failing to pass? I prefer to think we were saved from something equally as bad, no matter which plan had passed.

THEN, THE GENERAL Assembly last week failed to approve the “reform” plan that was preferred by Democrats. I write it as “reform” because it was really a measure that was meant to do as little as possible, while letting officials say they voted for something to impose change.

As someone who takes great interest in the reapportionment process because I find it intriguing the way a neighborhood’s partisan representation can be impacted by the way it is carved up by legislative boundaries, I fully realize the flaws of the current measure – the one enacted by the Illinois Constitution in 1970.

All too many people are quick to jump on Illinois’ tie-breaker function, which says that if the Legislature is unable to agree on a political map and if an eight-member commission can’t do it either, then a person nominated by a legislative leader whose name gets picked out of a glass bowl, or a hat, or some other object, gets to be the tie-breaker.

It was thought by the people who crafted the state Constitution that such a random act having the ability to give total control to one political party’s officials would be so terrifying that legislators would deliberately go out of their way to work together to create a map that would reflect all interests.

PERHAPS SUCH THOUGHTS were the after-effect of some late 1960s “acid” trip. Because the effect of that law has been that our legislators don’t even try to compromise on a bill, nor does the eight-member commission (four people from each major political party) do much of anything – until the name is picked out of the hat.

In short, our political people are swayed by greed. The thought that they can get total control if they hold out, and can give their opposition absolutely nothing, is just too tempting an opportunity to waste on actually trying to negotiate a map.

That attitude is the real problem, not the procedure imposed by the Illinois Constitution itself. In fact, I personally have always thought the image of picking a name out of a hat or glass bowl that once belonged to Abraham Lincoln was some sort of cute quirk that made us unique.

I am not convinced that any of the so-called reform measures would have done anything to change the situation in Illinois, in light of the fact that we have a highly-partisan state. The “greed” is still there to want to have everything.

UNTIL THAT CHANGES, no procedure is going to make that much of a difference.

This whole debate actually reminds me of the activity that took place a decade ago with regards to liquor distributors. William Wirtz, who operated the largest distributorship in Illinois and one of the largest in the United States, used his political clout to get legislators to make changes in the law that protected his business interests.

That caused his opposition to go out of their way to stir up so much resentment to Wirtz that the changes were rescinded by the General Assembly a couple of years later. But that issue ultimately came down to two sets of business interests fighting it out in the Legislature – with neither side having a moral high ground (even though I can still remember the lobbyist who became all offended when I disputed her statement that she was the “good guy” fighting against Big, Bad William Wirtz).

This issue is similar because neither side has the moral high ground. It’s all about partisan quarrelling by a pair of groups behaving like political hacks, trying to make themselves appear to be less guilty than the other side of causing the problem.

THAT IS WHY I am glad neither can claim a victory – even if it means that the same procedure that has applied for four decades will now be used for a fifth decade when Illinois officials change the legislative and congressional boundaries to reflect the movement of people around our state (a little less in Chicago proper, many more less in rural Illinois, and increases in parts of the Chicago suburbs).

I know that the “good government” types will claim their reform proposal took control of the process away from the legislators by having eight members chosen by the four legislative leaders (two each, which is the same as now), and having the ninth “tie-breaking” person chosen by the eight members.

That might force people chosen by political parties to have to work together. Then again, it might not. It might just create a deadlock that results in endless delays to create political maps, which will need to be done this year.

Do we really want endless delays of the kind we have seen with the Illinois Legislature in recent years to craft state budgets to now impact the boundaries that determine who actually represents us in the General Assembly and in Congress?

THEN AGAIN, I don’t consider the Democratic alternative to be much better. It talked of “transparency” in the way the commission operates – which basically means we will get to see for ourselves just how greedy our political people get when it comes to reapportionment.

So as much as I find it ridiculous that Democrats denounced their Republican colleagues for not backing their Citizens First Amendment, it was no more absurd than the Fair Map Amendment touted by the GOP. Both sides wanted reform “credit” for doing next to nothing in reform.

EDITOR’S NOTES: Greed and self-interest among elected officials will always find a way to undo any political mechanism created to try to overcome it.

Everybody wants us to believe that it’s the other guy’s fault that truth and justice did not prevail when it comes to reform of the redistricting process in Illinois. People with sense will disregard all such rhetoric.
Posted by Gregory Tejeda at 12:01 AM