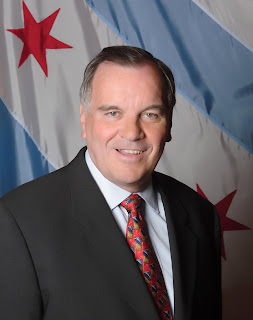 There is a certain knack possessed by Chicago’s long-time mayor. It’s not just that Richard M. Daley makes the occasional malaprop, but he can totally overcome the message he was truly getting at.

The moment I most remember is one that came early in his time as mayor, when Daley was at a press conference about expansion at a children’s hospital, and took a question about capital punishment that included the statement, “I’m pro-death. Let’s get on with it.”

BUT DALEY MAY have topped that Thursday when he was trying to appear to be defiant in the face of what many people want to believe is the Supreme Court of the United States’ likelihood of striking down the nearly three-decade-old laws that ban handgun ownership within the Chicago city limits.

On a serious note, Daley said he would push the City Council to pass an alternate version of a gun ban – if the current one is found to be unconstitutional. But for many people, Thursday is going to go in the books as the day that Daley threatened to shoot a reporter in the buttocks.

I’ll give him one bit of credit. At least this time, he kept on topic. But his press secretary is putting it mildly when she tells the Chicago Tribune that his phrase was, “less than ideal.”

For the record, Daley was asked by a reporter-type whether or not the city’s gun ban had been at all effective. The firearms crowd likes to argue that the continued presence of crime in Chicago means the gun ban has been a failure.

“It’s been very effective. If I put this up your butt, you’ll find out how effective it is,” Hizzoner Jr. said, while brandishing a firearm that had been confiscated by police. “That’s why you want to get them out. You want to get these out.”

That statement is going to overcome his comments about how the Supreme Court might experience a change of heart in coming weeks and wind up ruling in favor of upholding the city’s ordinance that has been in place since the days of Jane Byrne.

On a certain level, it will be regarded as evidence that Daley still has Sout’ Side in him. It may have been a couple of decades since he has actually lived in the Bridgeport neighborhood, but he still has that willingness to say something so ridiculous that some people will want to view it as the ultimate example of “common sense.”

I THINK IT is just the mayor having a brain cramp. But it will change the tone of the coverage of Daley’s statement, which was starting to turn into serious diatribes trashing the mayor as being “out of touch” with society.

One could argue that it is those people who are out of touch with the majority of those people who live in urban society who are skeptical of the notion that someone packing a pistol is going to effectively be able to do anything in the event of an attack – other than wind up shooting themselves.

Yes, if you have not figured it out yet, I am one of those people who thinks the fact that some in our society are so willing to accept the idea that the Supreme Court is destined to strike down the will of the city when it comes to firearms is the truly sad commentary on where we as a people stand today.

So I was encouraged by the early reports of Daley saying the City Council will find some other way of restricting access to weapons. I’m curious to see what the actual ordinance winds up looking like. But it has the potential to make for spirited debate this summer.

BECAUSE I’M SURE the gun proponents are going to want to view their viewpoint as inevitable (instead of a remnant of the past centuries). They are going to resent the fact that the majority will of the city will dare to try to put them back in their place, so to speak.

I would like to think that we would know better. But I also have seen enough as a reporter-type person for the past two-plus decades on assorted issues to know that the worst-case scenario is just as much a possibility as the idea that people will do the right thing.

Which makes me wonder if the long-term fate of this issue will be yet another lawsuit that works its way up through the judicial system to again bring the issue before the Supreme Court in some future year?

That future Supreme Court fight on the issue could be ridiculous enough that it may someday overcome the absurdity of Daley this week threatening to shoot a reporter-type person in his derriere.