We ought to hold courts to high ideal 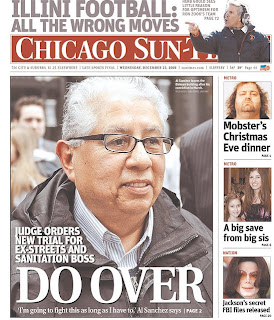 o overturn the conviction of the former Streets and Sanitation commissioner.

Al Sanchez was the former high-ranking Latino politico who got caught up in the petty graft that takes place at City Hall, which was the reason he went from being a noble public servant to just another corrupt official.

One of the primary witnesses to Sanchez’ behavior crossing over the line from political to criminal was someone who, to put it politely, sells illicit narcotics to earn a living.

It was the opinion of Sanchez’ attorneys that they should have been informed of that aspect of the witness’ character so they could use it against him during the trial, doing everything they could to besmirch his reputation in the eyes of the jury.

NOT THAT THAT alone would have guaranteed an acquittal for Sanchez. Anyone who has ever covered criminal proceedings realizes that the people who usually know the most about criminal behavior and activity are criminals themselves.

The idea of Jane Q. Citizen being an eyewitness and testifying as her way of serving her public duty occurs so rarely. Most of the witnesses in criminal cases are people who have something to gain by seeing the defendant receive a criminal conviction.

Prosecutors in this case admit they didn’t disclose all the information about their primary witness, although they claim it doesn’t matter. Even if he is not an ideal human being, this should not (in their opinion) be enough of an excuse to toss out the conviction that they worked so many years to obtain.

That is where I would have to disagree.

I REALIZE WE don’t live in the ideal world and that all witnesses have some sort of taint to them.

But something like this should have been made public. Let the defense do their best to try to “take down” the witness.

Because if the overall totality of the evidence is such that it persuades the jury to vote “guilty,” then it can be overcome.

How many organized crime figures are currently serving prison time because their one-time associates decided it was in their best interest (less prison time for themselves) to “give up” their former colleagues?

MY POINT IS that this factor can be overcome by prosecutors. Trying to downplay it by taking the attitude that the prosecution is somehow entitled to a bit of favoritism (seriously, I have heard prosecutors argue that judges are naïve when they use this type of logic to toss out evidence) is a sad case.

For the reality of every criminal case I have ever seen is that the prosecution has so many built-in advantages that there are times I wonder how any defendant ever gets an acquittal.

They shouldn’t have had to try to cut corners such as this.

For now we’re going to have to go through another trial, which will cost the federal taxpayers yet more dollars.

But then again, I don’t envision the prosecution wanting to give Sanchez any sort of deal that would let him plead guilty to a lesser charge – even though that would be the practical way to try to resolve this case at this stage in time.

For Sanchez is one of the former Hispanic Democratic Organization officials (even the group itself no longer exists) who got caught up in what prosecutors say was a scam to get around the rules that are supposed to govern hiring of employees for city government.

(Yes, there really are rules about how to get a job at City Hall, even though most people don’t have a clue what those rules really are).

NOW, WE GET to relive the whole hiring scam, and probably will get to hear a few stories about the venal way in which HDO attempted to bolster the political interests of Richard M. Daley by working on behalf of Latinos who were sympathetic to Hizzoner Jr.

By this point, it ought to be old news.

But that is what happens when prosecutors think they ought to have more advantages, rather than remembering that – in theory – defendants are innocent until proven otherwise.