They're coming to Illinois, accept it!

Federal officials made it final on Tuesday, the U.S. government is going to buy the largely-vacant prison near Thomson, Ill., and use it to house many of th 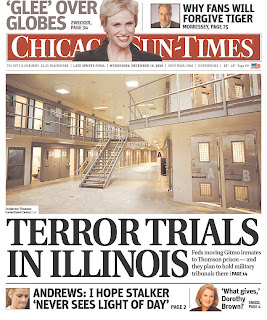 e alleged terrorist suspects who until now have been held indefinitely at the U.S. Naval base at Guantanamo Bay in Cuba.

President Barack Obama made one of his first actions in office to be the signing of an order that those inmates be moved out of there as soon as was practically possible, and the purchase of the prison means that the answer to the question “What will we do with them?” is now “Send them to rural Illinois.”

AS WAS TO be expected, this is becoming a partisan issue amongst our political people. Democrats are lining up behind the president, while Republicans are engaging in the scare tactics of ridiculous rhetoric implying that somehow, this makes Chicago more of a target for future terror acts than it already is.

Or do these people believe Chicago should give up O’Hare International Airport and the Willis Tower?

All big cities in this country are targets, just because an incident in Chicago or somewhere else significant will draw more international attention than, say, an attack on Watterson Towers in Normal, Ill. (and my apologies to any Illinois State University alums who ever actually lived in that 27-story structure).

Also, there’s the fact that no more than 100 Guantanamo inmates are being sent to Thomson, a maximum-security facility that has about 1,600 cells. This is not going to be the end destination for all those would-be terror suspects, so we’re not going to get the brunt of negative attention.

YES, I WILL come out and write it. I mock the idea that Illinois is somehow being put at risk by shifting these inmates to Thomson. I realize that they ultimately have to be put somewhere on the mainland United States, and a place in northwestern Illinois that is located a hundred or so miles from any city of significant size is about as isolated a ground as one can find.

About the only placemore isolated might very well be to build a facility in Alaska and transport them there – but then I could envision Sarah Palin getting all worked up.

Part of what makes me think little of the Republican rhetoric was the debate held this week among the GOP dreamers for Illinois governor – all of whom took their own shots at Democrats, which is to be expected.

But one-time Illinois Attorney General Jim Ryan, in his attempt to criticize, wound up conceding the absurdity of the argument.

“I THINK IT’S a very bad idea to bring the mastermind of (the World Trade Center attack) to Thomson,” said Ryan, according to the Daily Herald of Arlington Heights. “I have no doubt we can keep him there and he’ll never get out . But no one can tell me there’s no risk.”

In short, he concedes that it would be impossible for these inmates to sneak out of the prison and “blend in” with the surrounding community. So what’s the problem?

Is it just that some people are determined to complain no matter what the issue or how ridiculous a viewpoint they must take in order to be “in opposition” to the “other” side? Because under typical circumstances, these particular officials would be the first ones to praise the opening of a new prison facility because of the creation of so many new jobs for people who are their potential political supporters.

At least with the case of Rep. Mark Kirk, R-Ill., whose campaign website promoting his bid for a U.S. Senate seat contains a link to an Internet petition to be sent to Obama, his ridiculous rhetoric can be explained away as a cheap attempt to gain attention to his political aspirations and to try to appear more conservative than his voting record would indicate he is on various issues.

I’M SURE HIS people took a look at polls such as the one recently released by the Chicago Tribune that showed nearly half of would-be Republican voters (46 percent, to be exact) remain undecided, which means their initial look at Kirk was not enough to convince them to want to support him.

It may be shameful, but Kirk’s rhetoric is political, and his comments of today may very well be the ones that he tries to downplay in the future when he’s trying to get the votes of “real” people – not the ideologues.

My problem with the issue, and the reason I’m glad to see that movement is being made to get the inmates out of Guantanamo is that I always have believed the odd conditions (unlike those of any other person being incarcerated by our government against his will) of that facility go a long way toward undermining the moral authority our country claims with regard to the military efforts taking place in Iraq and Afghanistan.

A line I often have used remains true today – any time Fidel Castro can criticize you (and he has many times on this issue) without being totally dishonest means you’re doing something wrong.

TUESDAY’S ANNOUNCEMENT ALSO gave me a kick because it had the feel of Illinoisans taking over the White House for the day. Obama made sure to have Sen. Richard Durbin, D-Ill., at his side, along with Gov. Pat Quinn – who made last-minute changes to his schedule so he could be in the District of Columbia for the day instead of at his Chicago office.

Heck, even our other senator, Roland Burris, D-Ill., got into the mood, issuing the statement that usually would have been the priority of Republican officials and which likely will be the last time anyone pays serious attention to him.

More than 3,000 jobs created for the local folk, along with the potential for much more federal funding for the area on account of the fact that the Thomson Correctional Center shifts from the Illinois Department of Corrections to the U.S. Bureau of Prisons.