Is Chicago supposed to apologize?

It almost seemed like a double hit on the perception of Chicago, as provided in recent days by two of the nation’s prominent newspapers.

Both the New York Times and Washington Post published pieces of copy in the past couple of days that seem to put the Second City in a negative light – the Times ran a full-fledged editorial calling for the closure of the Chicago Sanitary & Ship Canal as the only way possible to prevent the Asian Carp from destroying the ecosystem of the Great Lakes.

MEANWHILE, THE WASHINGTON Post (the newspaper that recently decided to recall its Chicago-based correspondents on the grounds that it could cover our city from Foggy Bottom) published a story Tuesday about the record of Education Secretary Arne Duncan back when he was in charge of the Chicago Public Schools.

Among the points made by the Post is that school systems in Houston and Miami showed higher average test scores for their students than Chicago, while places like Atlanta and the District of Columbia showed larger gains than did our city’s school system.

The Post, so to speak, is less than impressed with Duncan’s performance in Chicago. Or at least they gave credibility to the thoughts of the Chicago-based people who were glad to see Duncan leave when Barack Obama became president. 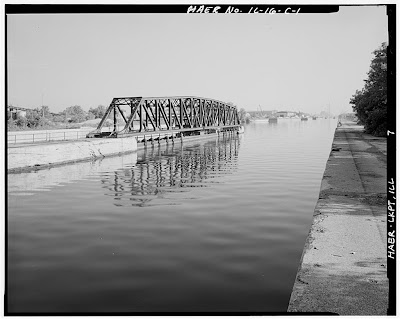 The Chicago Sanitary & Ship Canal has been around for more than a century, yet some out-of-towners are now anxious to give it full blame for the potential Asian Carp infestation into the Great Lakes. Photograph provided by Library of Congress collection.

The latter report struck me as a whole lot of hot air being given credence by the national capital’s local newspaper – which may reflect the mood among some D.C. insiders who are somewhat resentful these days about the degree to which adopted Chicagoan Obama chose his Chicago colleagues for several significant political positions in his administration.

LET’S BE HONEST – that’s part of the reason some people are so willing to see former Illinois Lottery Director Desiree Rogers twist in the wind because those two nitwits managed to sneak into a White House party.

So while I’m not necessarily a Duncan defender, a part of me can easily try to read through the Washington Post report’s lines to figure out how many of the educational accusations are mere political whining.

After all, I don’t think anyone seriously disputes that the Chicago Public Schools still have a long way to go in terms of improvement before they can be considered to be offering an adequate educational opportunity to city-based school children.

Somehow, it was the Times’ editorial that got on my Chicago-oriented nerves more than anything the Washington Post reported.

THE TIMES EDITORIALIZED about the Asian Carp problem – the one involving the fish that if they become a part of the Great Lakes ecosystem have the serious potential to devour the substances that other life forms in the lakes feed off of.

That would lead to a devastation of life in the Great Lakes as we have known it.

It also would be a blow to the regional economy, which relies on that canal to provide the contact between the Great Lakes (through Lake Michigan at Chicago) to the Mississippi River and which considers its construction one of the great engineering achievements of all-time.

Even the Times conceded that point, writing, “that would be hugely costly and poltiically difficult, given the importance of shipping to the region.”

NOW I’M NOT going to downplay the threat caused by the Asian Carp, which managed to get loose from Southern fish farms into the Mississippi River and have been swimming their way up north ever since.

I also realize that the electronic fences installed by the Army Corps of Engineers to try to keep the fish away from the Great Lakes are failing, and I don’t trust the once-proposed suggestion of dumping a substance that is toxic to the Carp into the canal.

Simply put, even though I’m not a biologist by profession, I’m skept ical of the claims that the substance would be harmless to human beings that came into contact with the canal.

But it just strikes me as being a little to simplistic to say that the only solution is to cut off the Great Lakes and Mississippi River watersheds. In fact, it may be downright unrealistic to expect anyone to take such a suggestion seriously.

THIS IS A serious problem that requires more thought than just saying “close the locks” (that would cut off the two water bodies from each other).

And while I usually give some respect to the New York Times for putting together a news report that tries to keep the trivialization of public events to a minimum, this editorial just comes off as a little too smarmy.

It’s almost like someone on 42nd Street having too much trouble comprehending what is happening out in the great Midwest.

The Army Corps of Engineers offers its explanation of how it is trying to keep the Asian Carp out of the Great Lakes (http://www.lrc.usace.army.mil/projects/fish_barrier/index.html), while the Encyclopedia of Chicago recalls (http://www.encyclopedia.chicagohistory.org/pages/300018.html) the construction of the canal as part of a deliberate effort to connect the lakes to the Mississippi (while also giving us the side benefit of having our sewage flow down to St. Louis – rather than into the city’s drinking water supply.
Posted by Gregory Tejeda at 12:01 AM